When Josephine arrived 16 weeks premature, weighing just 1 pound, 12 ounces, her parents hoped she would be well enough to come home at least within a month of her original due date. But that day came and went, and their daughter’s condition continued to deteriorate. Everyone said Josephine just needed more time for her lungs to develop, but Samantha and Justin realized their daughter’s complex medical needs called for a specialized approach.

Photo courtesy of Erika Nizborski Photography They found their way to the Newborn and Infant Chronic Lung Disease Program at Children’s Hospital of Philadelphia (CHOP), where Josephine received expert, coordinated care. Now, at 2 years old, she is home and making progress every day.

Difficulty breathing on her own

Josephine arrived prematurely on January 12, 2016, after her mother, Samantha, suffered premature rupture of the membranes (PROM), a tear in the amniotic sac. The tiny newborn was intubated, admitted to the neonatal intensive care unit (NICU) of the Virginia hospital where she was born, and put on a ventilator to help her breathe. Her parents’ hopes surged when she was taken off the ventilator a week later.

“We thought we’d fly through the NICU,” Samantha remembers.

But Josephine struggled without the ventilator. She was re-intubated and spent the next six months in the hospital. Diagnosed with chronic lung disease, Josephine was treated with inhaled respiratory medications as well as multiple steroid courses to help wean her off the ventilator. While she ultimately made it off the ventilator, it wasn’t without a cost. She developed pulmonary hypertension, a condition in which the pressure in the blood vessels in the lungs is very high, causing extra strain on the heart. She was frequently uncomfortable from not being able to breathe easily.

By early June, Samantha and Justin knew they had to find a hospital with expertise in treating babies like Josephine. CHOP was on their list, so they drove nearly three hours from their home in Northern Virginia to meet with Huayan Zhang, MD, medical Director of CHOP’s Newborn and Infant Chronic Lung Disease Program in the Newborn/Infant Intensive Care Unit (N/IICU).

“Dr. Zhang said, ‘If all she needs is time (to get better), she would have continued to progress forward, no matter how slow. But she keeps regressing, and we have to find out why,’” Samantha remembers. She and Justin made their decision. Their daughter would go to CHOP.

Josephine was flown to Philadelphia less than a week later. At CHOP, she underwent an ultra-low-dose CT angiogram (CTA), a special scan to evaluate the major pulmonary vessels and the extent of lung disease. The study showed severe chronic lung disease. Josephine would need long-term intensive management with multiple medications and mechanical ventilator support.

While the initial transition was challenging for the family, Samantha recalls it being a breath of fresh air to be surrounded by a multidisciplinary team who really understood Josephine’s pulmonary needs. “It was amazing to be in a medical environment where we didn’t feel like an outlier,” she says. “CHOP deals with so many kids with sick lungs from prematurity, that we knew they would have the full picture.”

Josephine had surgery to place a gastrostomy tube (G-tube), which allowed her to receive food directly into her stomach. A month later, at almost 7 months old, she had a tracheostomy (surgery to create an opening into her windpipe). This would give Josephine a stable airway for long-term ventilator support while allowing her to be more mobile. 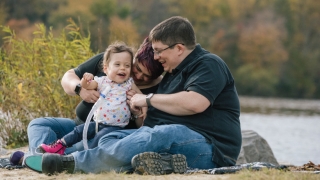 Photo courtesy of Erika Nizborski Photography With the tracheostomy, Josephine began to improve. She was transferred from the N/IICU into the progressive care unit (PCU). Physical and occupational therapists, speech-language pathologists and music therapists worked with Josephine to improve her developmental skills and mobility.

Meanwhile, Samantha and Justin were trained in tracheostomy care. It took six months and the efforts of a multidisciplinary team to transition Josephine to a home ventilator from the sophisticated hospital equipment. Finally, in February 2017, after 407 days of hospitalization, Josephine went home.

Nine months later, the family has started weaning Josephine off the ventilator, beginning with 15-minute sessions. Now at 2 years old, she enjoys being ventilator-free for up to eight hours a day. She’s eating solid food and has overnight feedings through the G-tube. She is also becoming more mobile, sitting up on her own, standing and even crawling. Josephine’s ventilator never stops her from getting where she wants to go.

“She tries to get into everything, just like you would want a young child to do,” her mother says.

The family returns to CHOP four times a year for Josephine’s cardiology and pulmonology appointments and is in phone contact with her CHOP pulmonologist every week or two.

“When a medically complex child is in your hands and you’re the one who has to deal with it, having someone who’s so calm and patient on the phone — there are no words to say what that means,” Samantha says of the support she receives from CHOP.