Imagine being a 14-year-old nationally ranked cyclist with dreams of the Olympics and being told you would need a leg amputation to get rid of osteosarcoma, a rare and dangerous type of bone cancer. 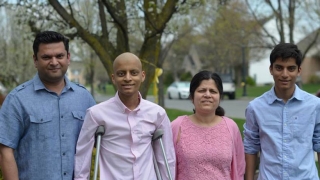 Then imagine hearing that not only can your leg be saved, but that you can resume cycling after approximately 18 months.

Those were the all-too-real conversations Arnav Krishna and his parents had in August 2016. The first was with a sports medicine specialist who made the initial cancer diagnosis; the second was with Kristy Weber, MD, an orthopaedic surgeon who co-leads the Bone and Soft Tissue Tumor Program at Children’s Hospital of Philadelphia (CHOP).

“The first thing Dr. Weber told us was, ‘There will be no amputation.’ It was a huge relief,” remembers Nitin Krishna, Arnav’s father.

“It was wonderful to hear her confidence,” says Sunita, his mother. “It gave us a big morale boost when we really needed it. From day one, her concern was for what Arnav wanted to do long term, what was best for his future.”

The family did secure a second opinion, which confirmed limb-sparing surgery, but the combination of a world-renown Cancer Center and Weber’s expertise led them to bring Arnav to Children’s Hospital for treatment.

Before surgery could occur, Arnav underwent three chemotherapy cycles of three sessions each to reduce the size of the tumor, which was localized and high grade. Under the watchful eye of his lead oncologist, Naomi Balamuth, MD, he spent two weeks as an inpatient at CHOP, then two weeks recovering at the family’s home near Allentown, PA, then back to CHOP for another chemo round. Sunita stayed with him 24 hours a day while Nitin came home each day, spending mornings and evenings taking care of Arnav’s twin, Dhruv.

Arnav’s friends would come to visit him at CHOP many of the nights while he was hospitalized. They would head to the Lion’s Den teen room, which is stocked with computers and video games. “They had retro arcade games, and we’d play for hours,” Arnav says. “We sort of took over the room.” Sunita would order pizza, and the boys would have a party.

Nurses were accommodating, knowing that’s where they’d find Arnav if they needed to take his vitals or hang a fresh bag of fluids.

He lost his hair, but not his positive attitude. He talked with his cycling team’s sports psychologist to figure out coping strategies. They came up with “relentless positivity” as a mantra to help him through the difficult times.

Arnav’s osteosarcoma was in his left large shin bone (the tibia), just below his kneecap. One option would have been to replace his left knee along with taking out the tumor-involved portion of the tibia. He would be walking around in a couple of months, but his athletics would be limited. Option two would spare the knee joint, but require a year and a half recovery time. However, he could resume strenuous exercise once it had healed.

To no one’s surprise, Arnav picked the second choice. He and Dhruv had begun cycling at age 8 and by the time of his diagnosis, both were serious competitive track cyclists. In fact, when Arnav’s leg first started to hurt, he figured it was related to his intense training schedule — four to six hours a day, six days a week — leading up to the junior national championships. Despite being in pain, he finished 18th nationally in his age group. His diagnosis came a couple of weeks later.

A second decision involved Arnav’s height. Since the tumor incorporated the growth plate at the top of his tibia, it must be removed, halting future growth. To keep his legs an even length, he would need to either have the matching growth plate in his right leg removed or, eventually, have leg-lengthening surgery in his left leg. The family opted to remove the right shin’s upper growth plate.

That means that Dhruv will probably end up being taller, but Arnav keeps it in perspective. “Yep, but we’ll see who stands taller on the medal podium,” he says. 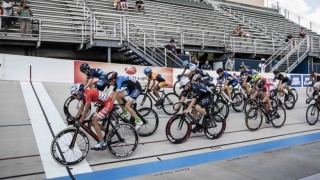 Finally, on Nov. 30, 2016, it was time for surgery. “Even though they brought together a multidisciplinary team ahead of time to explain everything to us and detail all the phases, it’s still unnerving,” says Nitin. “We knew it would be a long day. We received updates every hour or hour and half, and Dr. Weber even came out half way through to talk with us. It was a tense day.”

To fill the gap of the removed portion of his left tibia, Dr. Weber used a combination of a cadaver bone, a steel plate and a section of Arnav’s right fibula, the thinner bone at the back of the lower leg. The technique ensures strength and durability of his lower left leg.

One reason it took all day was the delicate microvascular surgery, performed by Stephen J. Kovach, MD, needed to connect all the smallest blood vessels from the site of his original tibia to the transplanted fibula. Post-op test showed the tumor was 100 percent resected.

“The skills of Dr. Weber and Dr. Kovach are incredible,” says Nitin. “It made all the difference.” 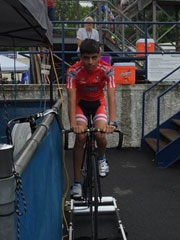 Two weeks post-surgery, chemotherapy started anew for four cycles. Arnav’s final treatment ended April 30, 2017. All scans have been clear of cancer since then.

Through it all, Arnav tried to maintain as normal of a teenager’s life as possible. Between cyberschool and a teacher who came to his home when he was there, he was able to stay up to speed with his freshman classes. He’s back to school full time as a sophomore, still loving science, especially.

Arnav’s been concentrating on rehabilitating his leg, building strength as the bone knits. A quick surgery in August inserted a bit of his hip bone into the tibia to fill a small gap and create a stronger shin. He’s completed the initial round of physical therapy and now does the exercises on his own. He will engage in next round of PT once cleared to put his full weight on his left leg.

He’s back on the bike — just a stationary trainer so far since “pedaling helps stimulate healing,” Arnav says — with an eye toward returning to the track on his racing bike in July 2018.

“I’ve been through the worst part,” Arnav says. “It was scariest at the beginning when I first found out I had cancer and there was talk about amputation. Now my leg has been saved, and I’m getting stronger. I’m staying positive and waiting for healing.”