When Max, an active, sports-obsessed 7-year-old, experienced leg pain, it seemed like a simple pulled muscle. As it worsened, doctors uncovered a rare disease that threatened to keep him from ever running again. A year later, Max is back on the field thanks to the world-class expertise available at Children’s Hospital of Philadelphia (CHOP). And he’s found a way to help other kids with the same condition. 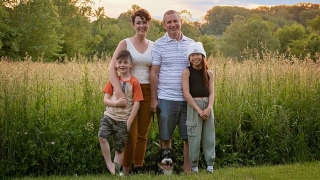 Max and his family Max’s mom, Joy, describes him as an extremely social kid, who runs virtually nonstop and is happiest during any activity with a ball.

When he complained of upper leg pain while playing football last spring, it didn’t seem serious. But they took him for an exam, “because he’s not a kid who complains about pain often,” Joy said. His pediatrician initially thought it was a pulled muscle, and prescribed stretches and icepacks – which seemed to help for a while.

In the summer the pain came back; and this time, it didn’t get better. Soon, Max developed a limp. The pediatrician ordered imaging to get a better idea of what was going on.

The results were a surprise to everyone. The imaging showed that the rounded top of Max’s femur, known as the femoral head, was dying. The pediatrician suspected Legg-Calve-Perthes disease, a rare disorder that deforms the femur, causing significant pain and lost flexibility at the hip. He urged Joy to take Max to CHOP for confirmation and treatment — and to keep her always-running son off his feet.

“The call was devastating,” Joy admits. “I tried not to let it be because I know kids and families struggle with so much worse. But it was unimaginable that we would have to kill his joy. It felt like this diagnosis went right after part of his identity.”

Their first consultation at CHOP confirmed the diagnosis of Legg-Calve Perthes disease. Max’s femoral head (the ball joint at the top of the femur) wasn’t getting enough blood, causing the bone to collapse. The bone would eventually regrow, but the impact of daily activities could flatten and deform the femoral head, preventing it from fitting properly into the hip socket. 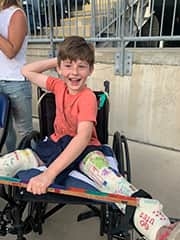 Max spent six weeks in an A-frame cast to ensure proper positioning while his hip joint healed. The local orthopedist warned the family that Max might not be able to run or jump for three years during his treatment and healing. But there was a glimmer of hope: Their next appointment would be with Wudbhav N. Sankar, MD, a world-renowned expert in Legg-Calve-Perthes disease and hip disorders in youth. Dr. Sankar heads up the Hip Disorders Program and is Director of the Young Adult Hip Preservation Program at CHOP.

Dr. Sankar examined Max, and reviewed results from a specialized MRI that maps blood flow and helps determine disease severity. Then, Dr. Sankar suggested a few potential treatment options. Given Max’s advanced condition and his eagerness to get back on his feet (literally), his family chose the most surgical approach. The goal of treatment was to “contain” the femoral head while it regrew and help it retain its round shape to fit into the hip socket properly. This would entail a two-stage approach to treatment:

Joy’s fears eased after the meeting. “Dr. Sankar had a solid treatment plan but also a lot of empathy for what Max was going through,” she said. “We left with a lot of confidence and trust.

“I never second-guessed anything Dr. Sankar said because I knew he was the best and specialized in this rare disease,” she added. “We were so grateful that CHOP has these doctors practically in our backyard that people fly in from all over the world to see.”

Back to baby steps after hip surgery rehab

First, Max had surgery to loosen his stiff muscles, immobilize his legs and increase blood flow to his hip joint. Max spent six weeks in ankle-to-thigh casts on both legs, with a bar in the middle keeping his legs in an “A” shape. That meant no baths for six weeks (news that Max celebrated). Less enjoyable aspects of treatment included using a wheelchair at school and being carried at home.

When the casts came off, Max moved to similarly shaped braces at night which were uncomfortable and made sleep difficult. He underwent a second stage of his treatment: a bone surgery to cut and angle his femur bone deeper into his hip socket. This required a cut on the outside of his leg and internal plates and screws to hold the bone in the new position. After surgery, he used a wheelchair or walker to get around as he tried to avoid putting weight on his fragile hip.

Joy appreciated that Dr. Sankar had some flexibility in his treatment plans. “He understood some families might want to avoid surgery and others want more aggressive options. He’s willing to meet you where you are.”

After his second surgery, Max had physical therapy once or twice a week and got X-rays every three months to monitor the healing progress in his femur and hip joint.

When his bone started to heal after several months, Max was allowed to start walking – with the supportive braces still on – but his muscles had atrophied from lack of use. Essentially, he had to relearn how to walk. It took time, but now he has full mobility and is only restricted from participating in organized sports. His doctors expect that by the fall – when his leg muscles regain their strength and his remaining limp resolves – he’ll be able to restart sports as well. 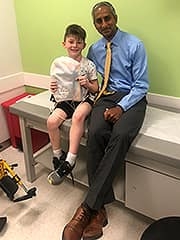 Max shows Dr. Sankar one of the 70 care packages he and his family put together for other patients being treated for Legg-Calve-Perthes disease at CHOP. While the results were certainly worth it, the treatment was a physical ordeal for Max and emotionally difficult for both him and his family. The metal braces and hard cast made it hard for him to sleep — which meant his parents also got little sleep. An active family, they had to change their routines and Max felt socially isolated since he had to give up many of his favorite activities.

“We were lucky to have access to good mental health care for all of us, including the child life team at CHOP,” says Joy. Child life specialists worked with Max and his family to try different approaches at home and school to address Max's sadness and frustration. “We were set up with the Family Stress and Illness Program through CHOP's behavioral health team and they were really great as a support as well.”

When Max was at his lowest emotionally, one strategy helped him focus his attention outward: putting together care packages for other patients undergoing the same treatment.

“I know how it feels and it's going to be pretty hard to get through," said Max.

The child life team gave Max a list of items that would be helpful for other youth, and he and his family set to work getting donations. Max, his sister Yunni and a 7-year-old friend (also a patient of Dr. Sankar's) put the packages together. All told, 70 pediatric patients being treated for Legg-Calve Perthes received care packages from Max and his group.

"Lots of people helped me, so I wanted to help other kids,” Max said. “I feel good knowing I made a difference.” 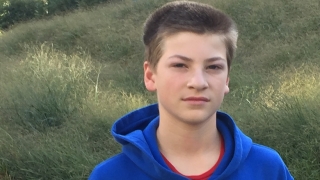 When Andrew's hip joint deteriorated, he worried that he would never be able to play sports again but orthopaedic surgery and a lot of rehabilitation led him to the championships.

Once in so much pain he couldn’t walk, Daniel is back on the field competing in tournament baseball.