Five-year-old Gracie loves gymnastics. She tumbles, walks on the balance beam, and tries to do cartwheels. She also does ballet, and has even tried soccer – a favorite sport of her six older siblings. She started kindergarten at her Tucson, AZ., school on schedule, and plays and learns happily with her peers. 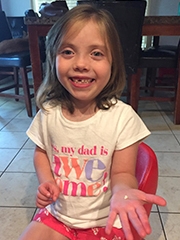 She’s a normal, happy kid, which is a wonderful thing for her parents to see. “Just watching her run is amazing,” says her mother, Lisa. “Something as simple as seeing your child run, which other parents take for granted, is incredible to me.”

That’s because Gracie struggled with critical medical issues for the first four years of her life, and nearly died before a new treatment pioneered at Children’s Hospital of Philadelphia (CHOP) and the Hospital of the University of Pennsylvania saved her life and set her on the road to health.

Gracie was born with several heart problems, which were detected in a routine fetal scan five months before she was born. These included transposition of the great arteries (in which the lower sections of the heart are reversed), pulmonary atresia (a malformed pulmonary valve that blocked the flow of blood from the heart to the lungs), a ventricular septal defect (VSD, a hole in the wall separating the right and left ventricles of the heart), and an atrial septal defect (ASD, an opening between the two upper chambers of the heart). Together, the abnormalities in her heart prevented normal blood flow and oxygen uptake.

At birth, Gracie went straight to the newborn intensive care unit (NICU) and had heart surgery a week later. At five weeks, she’d recovered from the surgery and was stable enough to go home. More surgery would be needed later to fully correct her heart problems, but she was fine for the time being. For the next 14 months, she was home with her family and had no significant problems.

When Gracie was 15 months old, her doctors determined that she was ready for a full corrective double switch procedure to more completely correct her heart problems. This second procedure did not go as well as the first.

For the next five months, Gracie was in and out of the hospital with fluid in her lungs and other respiratory problems. Her lungs became infected. A chest tube to drain the fluid did not resolve the issue. In response, her doctors decided to perform pleurodesis, a surgical procedure to adhere the lungs to the inside of the thoracic cavity. The procedure was done on one lung, but the fluid jumped to the other side and the procedure had to be repeated.

As part of these procedures, the surgeons ligated (tied off) Gracie’s thoracic duct, a part of the lymphatic system. Normally, the body responds to this by building new connections around the disruption or break. That did not happen with Gracie. Her lymphatic system did not repair itself, and she began to weaken. She was diagnosed with protein-losing enteropathy: Her body was not absorbing protein and other key nutrients. Instead of being taken up in the intestines as part of normal digestion, the proteins in Gracie’s body were going straight to her bowels and excreted as waste.

“She became a hospital baby,” recalls her mother, Lisa. “She was in the hospital more often than she was at home. She got a feeding tube. She was put on steroids. Her face and tummy swelled up. She didn’t grow. She didn’t gain weight. She was skin and bones with a big, swollen belly. For the next two years she just got worse and worse.”

“That was a tough time for all of us,” says her father, Patrick. “One night she asked me, ‘Dad, why can’t the doctors fix me?’ It’s tough even now to think back on that period.”

When she was 3, Gracie started getting nutritional infusions through a Port-a-cath®, a catheter connected to a vein in her chest. Her body rejected three of these, until one was attached through her abdomen to her iliac vein. Lisa would take Gracie to the hospital for weekly infusions of albumin, calcium, potassium and other nutrients. By the time Gracie turned 4, she needed to receive those infusions more frequently, and she was admitted to the hospital several times when her sodium levels became dangerously low. The infusions were increased to three times a week, then to a constant feed. Gracie’s lymphatic system was failing her. As a result of nutritional deficiencies, her bones started to weaken, and she could no longer walk or stand up.

Meanwhile, Dr. Dori at Children’s Hospital of Philadelphia (CHOP) and Dr. Itkin were having success with experimental procedures to identify and repair leaks in the lymphatic system. The doctors in Tucson had been in touch with them about Gracie, and when her condition really began to deteriorate, the team in Philadelphia was ready to help her.

Gracie flew from Tucson to Philadelphia on March 18, 2015. On the jet with her were her parents, a nurse, two medics and the pilots. Gracie was strapped to a stretcher and hooked up to her infusions for the flight.

“Gracie was admitted to CHOP that day and we met with doctors Dori and Itkin,” Lisa remembers.

“we'd spoken by phone, but when i met them in person, i just knew gracie was in good hands. they were so knowledgeable. they weren't just doctors. they had so much empathy. they made us laugh, anxious as we were.”

The medical team at CHOP’s Jill and Mark Fishman Center for Lymphatic Disorders used dynamic contrast MR lymphangiography (DCMRL), an advanced imaging test developed at CHOP, to confirm the location of the leak in Gracie’s lymphatic system. They then performed a minimally invasive procedure called thoracic duct embolization to seal the leak. The center’s team has treated more than 500 adults and 100 children with lymphatic leaks and lymphatic flow disorders, making it the largest and most active treatment program of its kind in the world.

“After all she had been through,” says Lisa, “the major surgeries, the really serious and painful procedures – and her steady decline in spite of all those efforts – what doctors Dori and Itkin did was so simple and amazing. They closed the leak with no surgery. With all of the scars on Gracie’s body, three little dots are the only marks of the procedure that finally saved her life.”

“She started to improve within 36 hours,” Patrick remembers.

“you could just see the energy coming back into her eyes. we were there for just three weeks, but by the time we left she had started walking again.”

With the hole in her lymphatic system closed, Gracie started to process protein again. The albumin levels in her blood stabilized, then began to climb to normal levels. She started to regain strength.

“By the time we left, I knew she was going to get better,” says Lisa. “A huge weight was lifted off of us. They saved her life. We have an amazing hospital in Tucson, but when she was in Philadelphia, I felt like the entire floor was there for my daughter. The nurses, all of the people she met, were very sensitive, very caring.”

Gracie weighed just 23 pounds when she arrived at CHOP. Within a couple of months, she had gained seven pounds. She wore a size 4 shoe before the procedure. Eighteen months later, she’s in a size 10.

Since leaving Philadelphia, Gracie has returned to the medical care of her doctors in Tucson, but the doctors who treated her in Philadelphia are still part of her medical team. Her local doctors see her and do periodic tests, then share their observations and findings with the team in Philadelphia to make sure her health remains on track.

Gracie is now in kindergarten, living the life of a normal 5-year-old, doing gymnastics and ballet and playing with friends and her older siblings. She’s a happy, smart child.

“She’s just fun,” says Patrick. “She makes everybody around her laugh. Everybody loves her.”

Even in the tough times, Gracie always found a way to smile. Now the smiles come more easily. 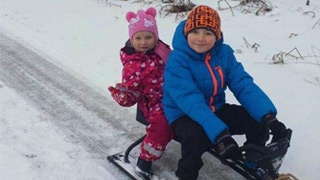 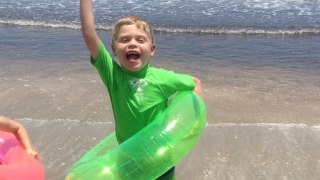