Natasha has always dreamed of a career in pediatric medicine. Surgery at CHOP for a rare hand condition not only allowed the 17-year-old cheerleader and softball player to return to her sports, but also confirmed her career passion. 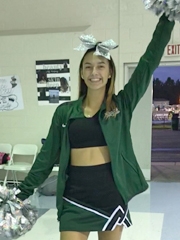 Natasha’s symptoms began gradually. When she was 15, she started complaining of pain in her left wrist. She noticed it most when she wore her softball glove. She mentioned it at her annual physical and her physician near her home in New Jersey said it was probably just a bruise. But the pain didn’t go away.

But over the course of the next year, the pain in Natasha’s wrist grew more and more severe, and her wrist developed a visible S-shaped deformity. The head of the ulna bone appeared prominent in comparison to Natasha’s normal wrist. Natasha tried to massage the area that hurt, but nothing seemed to help. She had to stop weightlifting for softball due to the pain.

Her mother consulted an orthopaedic specialist Natasha had seen for a back problem when she was younger. He recommended an evaluation with Children’s Hospital of Philadelphia’s Hand and Arm Disorders Program, the region’s largest center treating children with congenital deformities, injuries and tumors of the hand and arm. Each year, the program’s orthopaedic and plastic surgeons perform more than 1,000 procedures in children.

Natasha was able to meet with CHOP pediatric orthopaedic surgeon Apurva Shah, MD, MBA, an expert in pediatric hand and upper extremity surgery, at the CHOP Specialty Care Center at Virtua, a CHOP satellite location close to her home. After performing additional X-rays, Dr. Shah diagnosed Natasha with Madelung's deformity, a rare genetic condition that causes premature closure or defective development of the ulnar portion of the distal radius (wrist) growth plate. Madelung’s deformity results in an increased tilt and shortening of the radius which can cause progressive wrist pain and deformity in children and adolescents.

Dr. Shah recommended surgery which included a corrective osteotomy (surgically cutting the bone) of the radius in order to undo the bone’s excessive tilt, and a second shortening osteotomy of the ulna in order to even the length of both bones in Natasha’s forearm. Natasha underwent the surgery at CHOP’s Main Campus in Philadelphia. The procedure was a huge success. The bones were successfully repositioned into their normal alignment, and Natasha’s visible wrist deformity disappeared.

Pain-free and back in action

After an overnight stay in the hospital, Natasha was discharged home in a cast. Four weeks later, she transitioned to a custom splint for four additional weeks. She underwent two months of intensive rehabilitation with an occupational therapist at CHOP Virtua, and was recently cleared to return to cheerleading and softball.

“Natasha has been a true superstar,” says Dr. Shah. “She worked hard to recover her strength, and the results were obvious. I could tell that she was truly doing well when I saw her big smile. Given her rapid recovery, our team was able to release her to sports four months after the operation.”

Natasha is glad she had the procedure.

“It feels better,” she says. “There’s no pain. It feels like there was nothing ever wrong with it.”

The experience also confirmed her interest in a career in medicine.

“Going through that experience made me want to do it even more,” she says. “Dr. Shah and the team at CHOP were great. Surgery is really cool, and they made sure I understood what was going on.”