Kelsea Henderson, 18, of Elmer, NJ, started having pain in her side when she was 13 years old, the summer after 7th grade.

The pain was very inconsistent and her mom, Pam, chalked it up as growing pains.

The pain continued through the summer. Soon after school began, during a slumber party, Kelsea experienced unbearable pain that could not be ignored. Her parents took her immediately to the hospital. 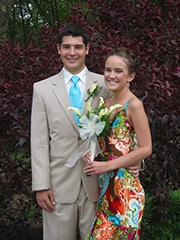 A CT scan showed a mass on Kelsea’s spine. The physicians referred her to The Children’s Hospital of Philadelphia where the family saw pediatric surgeon Michael L. Nance, MD, and pediatric oncologist Jean B. Belasco, MD, of the Cancer Center. Kelsea was admitted immediately.

The first biopsy showed that the mass was benign, but a follow-up thoracotomy showed a change in the appearance of the tumor; it had become cancerous. Pam says this is where the family's roller coaster ride began.

Kelsea initially was treated with chemotherapy. The tumor responded better than most, and Dr. Nance performed another operation to remove more of the tumor. He couldn't remove the entire tumor because it was going up and down the spinal canal and growing in towards the spinal cord. Next, she received radiation and chemotherapy, and the tumor's growth was slowing.

Her oncologist, Dr. Belasco, asked if Philip Storm, MD, pediatric neurosurgeon at Children’s Hospital, thought he could remove the tumor. He said it may be possible with an absolutely heroic procedure. Her family understood there would be a high complication rate — mainly because of the radiation — but they knew the risk of not operating was a death sentence.

An MRI the next morning showed the entire tumor was out, but now her spine was very unstable and she had a huge chest wall defect. The next day Dr. Storm fused her spine from T1-T12 and David Low, MD, a pediatric plastic and reconstructive surgeon at Children’s Hospital repaired her chest wall defect.

Kelsea did well for about four days and then she had some complications.

The chest reconstruction got infected and she needed multiple washouts and the construct had to be removed. They couldn't remove the hardware from Kelsea's spine and chest, and instead tried to treat it with antibiotics. Due to the radiation, one of her lungs never healed properly and she began leaking air out of a hole in her back. That's when Drs. Low, Storm and Daniel Sterman, MD, chief of Interventional Pulmonology and Thoracic Oncology at the Hospital of the University of Pennsylvania, got creative.

Dr. Sterman got compassionate use from the FDA to put one-way valves in her lungs that would allow the air to go into the lung that was communicating with the skin. The valve procedure was performed in concert with John Kucharczuk, MD, chief for the Division of Thoracic Surgery at the Hospital of the University of Pennsylvania (PENN), and Colin Gillespie, MD, of the section of Interventional Pulmonology and Thoracic Oncology at PENN.

After the operation Kelsea still was leaking air and within two weeks she called and told Dr. Storm that she was now shorter than her sister and she "heard her ribs crunch" when she walked. She was not fused and developed terrible scoliosis and kyphosis. She was admitted that day and put on bed rest until Drs. Low and Storm could figure something out. Because of the radiation her bone just wasn't healing.

On Jan. 31, Dr. Low and Dr. Storm performed a 25-hour operation on Kelsea where they replaced her hardware — 24 titanium screws and two large titanium rods, repositioned her muscle flap to better fill her left chest cavity, and harvested her fibula bone from her leg to reinforce the weakened spine (called a vascularized bone graft).

This required microsurgery, including harvesting her saphenous vein from one of her legs, in order to connect the vessels from her fibula to the nearest vessels in her axilla. Dr. Low reconnected the blood supply to the fibula to keep it alive — having a living fibula allows the bone to grow into the rib cage and give it support. Dr. Sterman then blocked more bronchi in the lung.

When Kelsea was finally able to go home, she simultaneously made up school work she missed during the third marking period and stayed current with work in the fourth period. She was diligent about physical therapy and went three days a week.

Kelsea is very proud of her scars and wore a dress to the prom last year that showed off her back scars.

She is now complication free, tumor free and has no air leaks or any problems. She is a beautiful girl who is an honor student. She is planning to go to St. Joe’s University on a scholarship for cancer survivors.

Through this ordeal she was pleasant, upbeat and never once complained. She was always smiling and quickly became one of the team’s favorite patients.