Specialists from CHOP’s Spina Bifida Clinic met Maverick and his family before he was even born and have supported them along their journey ever since. 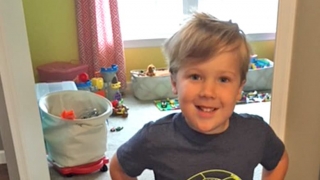 During Holly’s 20-week ultrasound, her obstetrician noticed anatomical issues with the baby boy she was expecting. The OB suggested Holly go to Children’s Hospital of Philadelphia’s Center for Fetal Diagnosis and Treatment.

During a full-day evaluation at the center, the baby’s diagnosis was confirmed as spina bifida. Based on the level of the defect, Holly was told the baby might have issues with their bladder and bowel, breathing, mental development, mobility, and paralysis after birth.

Holly had monthly checkups at CHOP until 39 weeks, when Maverick was born in CHOP’s Garbose Family Special Delivery Unit. A few hours after birth, he underwent surgery to have the defect closed. Maverick spent 12 days in CHOP’s Harriet and Ronald Lassin Newborn/Infant Intensive Care Unit (N/IICU). During that time, he underwent a second surgery for a VP shunt.

The family has returned to CHOP for appointments at the Spina Bifida Clinic every six months since Maverick’s discharge. The clinic offers continuity of care from specialists the family has known since before Maverick was born. They are able to meet with all the specialists — from neurosurgery to urology to physical therapy — on the same day, and all of his clinicians are on the same page. They’ve supported Maverick through bowel and bladder issues, helped the family adjust to catheterization, and helped Maverick learn to walk with AFOs.

“I value it so much,” says Holly of the clinic. “We feel so connected to CHOP. When we’re there, it’s just a comforting, safe place. They are there to build us up. I can call any time, email any time. It’s just very good to have that support. I feel like I could ask them anything, and if I’m having a rough time, they help me out. It’s been really supportive.”

Maverick is now a determined, outgoing and social 4-year-old who loves playing with his three older siblings. There’s always a skill he’s working on mastering, says his mom. His latest accomplishment is jumping off the ground with both feet. He also recently started riding a tricycle, and he can hold onto the railing by himself to go up and down steps.

“You can tell when he does it, he feels pride that he can do things,” says Holly. “To be told spina bifida would be a hardship and then to see how he has overcome and just his personality, it just gives me joy. He’s just like everyone else. He just does things a little bit differently.”