When Harper was diagnosed with nephrotic syndrome and the initial treatment approach failed to help him, his mother, Morgan, turned to specialists on the Nephrology team at Children’s Hospital of Philadelphia for a second opinion. Harper has now been in remission for his longest stretch yet.

Growing up, Morgan knew her uncle had passed away from a kidney disease in the 1960s, well before she was born. He had the condition since infancy and died at the age of 22, after years of dialysis and two kidney transplants. But Morgan didn’t know that the specific kidney disease her uncle had was nephrotic syndrome until her own son, Harper, was diagnosed with the condition at age 3. Fortunately, treatment advances over the past 50 years offer hope for a much better outcome for Harper.

It was New Year’s Eve in 2017. Morgan and Harper had an exciting evening planned that included Disney on Ice. When Harper awoke from a nap earlier in the day, his face looked a little swollen, but he’d had allergies in the past, so his parents assumed he was just having a mild allergic reaction. They gave him an antihistamine and within an hour or two, the swelling went down.

On their way to a late dinner after Disney on Ice, Harper was shivering and seemed cold, but he said he was feeling fine and that he was hungry, so they continued on with their plans. But shortly after arriving at their destination, Harper vomited.

The family went home and monitored his condition until he fell asleep. When he awoke the next day, Harper seemed a little groggy, but he was playing and eating, so his parents thought he was OK. But later that day, Harper got sick again. Morgan called the pediatrician and got an appointment for the next day. The physician found that Harper had gained 10 pounds since his yearly checkup just a month before. His stomach was so swollen that his belly button was just a thin horizontal line. Morgan remembers her head spinning when the physician said, “Pack your bags, you’re going to the hospital.”

After a number of tests, physicians in the ER at the nearest pediatric hospital diagnosed Harper with nephrotic syndrome, a disorder in which the kidneys leak protein from the blood into the urine. The condition is thought to be caused by the immune system attacking the kidney. Left untreated, it can result in life-threatening infections.

Harper was admitted to the hospital and started on a six-week course of steroids to get rid of the protein in his urine and the fluid buildup in his body. After a week, he was discharged home. The steroids caused Harper to experience multiple side effects and, after weeks, had not decreased the protein in his urine. Morgan wanted a second opinion from experts in nephrotic syndrome, so she made an appointment at Children’s Hospital of Philadelphia (CHOP).

After running a series of tests, Madhura Pradhan, MD, MBBS, attending nephrologist, devised a different course of treatment. Harper was slowly weaned off steroids and started on an immunosuppressant. Dr. Pradhan hoped it would improve his chances of remission. Harper was able to maintain “spotty” remission. After his latest relapse, he received two infusions of an immunosuppressant and has now been in remission for six months, the longest stretch yet. His kidney function is normal and he’s doing well. 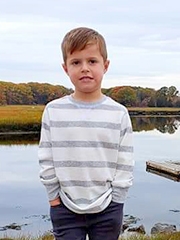 Harper has experienced many side effects from his medications, including leg tingling, back pain and headaches, and sometimes he’s really lethargic and can’t keep up with other kids his age. Dr. Pradhan hopes to wean him off the immunosuppressant he takes daily to free him of those side effects and rely on the infusions when he relapses.

Harper is now 5 years old and in kindergarten. He loves to make people laugh, loves sports, and thinks he’s a super hero. He is also very caring and empathetic.

“No matter what he’s going through, he’s always thinking about other people at the same time,” says his mom. “He handles everything so well. We have our bad days, but we focus on our good days.”

Morgan says it’s hard to handle the thought of your child having nephrotic syndrome, but rather than feeling sorry for the situation, she channels her energy into advocacy work. She encourages her son to face the challenges of his condition with the same attitude. Morgan is part of the Division of Nephrology’s parent/family group, which periodically meets with the clinical team to share the parent/family perspective. The family also does the National Kidney Foundation walk every year, rallying family members and friends to support the cause, and gives back to CHOP by dropping off gifts for kids who are hospitalized during the holidays.

“We’ve gotten so much from CHOP,” says Morgan.

“All of the doctors, nurses, child life specialists and staff treat him as if he’s their own child. They’re family, honestly. They are always there for you”

“We want to teach Harper the appreciation of giving back. That’s what it’s all about,” says Morgan.