For the past three years, Isabella has been healthy. While most kids her age might take that fact for granted, Isabella, who suffered a very serious case of lupus at age 6, knows how lucky she is.

It started with a fever that lasted days. When Isabella’s parents took her to the pediatrician near their home in Cherry Hill, NJ, the pediatrician noticed that Isabella’s eyes were puffy, so he thought she had allergies. But the fever and puffiness didn’t go away. Then, her parents noticed that her stomach was bigger than usual and she wasn’t going to the bathroom. They immediately took her to their local hospital.

Physicians performed an evaluation, which included an analysis of Isabella’s urine. The urine sample showed an excessive amount of protein in her urine, suggesting that something was going on in her kidneys. They transferred Isabella to Children’s Hospital of Philadelphia (CHOP), which has one of the top pediatric nephrology programs in the nation, led by experts in kidney care.

Results from a urinalysis, blood test and kidney biopsy led Kevin E. Meyers, MBBCh, Assistant Chief of CHOP’s Division of Nephrology and Co-Director of the Lupus Integrated Nephritis Clinic at CHOP, to the diagnosis of lupus, an autoimmune disease in which a person’s immune system attacks their own tissues and organs. It can cause inflammation of and damage to the organs, skin and joints, as well as blood disorders.

For Isabella, the condition was causing fluid retention and anemia, a blood disorder that causes unusual fatigue and weakness.

“It was pretty bad,” says her dad, Jason. “They said we got there just in time, otherwise she would have gone into kidney failure.”

Isabella was admitted to the hospital and underwent a blood transfusion to treat the anemia. She underwent plasmapheresis, a treatment where blood is filtered through a machine to remove antibodies, and was treated with medications to control the inflammation and suppress her body’s autoimmune system. After 12 days in the hospital, she was discharged home.

Isabella has continued to take a low-dose of medication, which has kept her in remission ever since discharge. She has appointments with Madhura Pradhan, MD, MBBS, CHOP attending nephrologist, every few months to make sure her disease is under control and to monitor her need for medication. Fortunately, her family is able to schedule those follow-up visits with Dr. Pradhan at the CHOP Care Network Specialty Care Center in Voorhees, NJ, which is closer to their home than CHOP’s Main Campus. 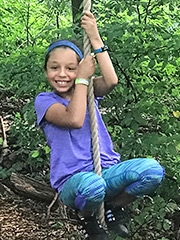 The plan is to try to wean Isabella from the medications in a year or two. But for now, her parents and her care team are happy she is doing well and content to let her enjoy her good health.

“CHOP has been amazing,” says Jason. “The way they care for my daughter and us. The professionalism. They really care for people and make sure that people are getting what they need, which is important.”

Isabella is now in fifth grade. She likes school and is very crafty. Her father says one of her favorite things to do is make furniture and buildings out of cardboard for her collection of dolls. She is also a great big sister to her two younger siblings, and even helps out around the house.