Mary McKernan was quite the social butterfly during her time at The Children's Hospital of Philadelphia (CHOP). She became known as the hostess of wonderful tea parties in her hospital room.

Though sometime exhausted during long inpatient stays, she always found the energy to walk the hallways handing out seasonal treats such as candy canes and valentines.

Accompanied by her bunny, Mary played her way through some incredibly tough times. She emerged wearing a pink tutu and a smile.

“We like to say she danced her way out of the Hospital — she was wearing a tutu, and she literally did,” her dad, Tom, says. 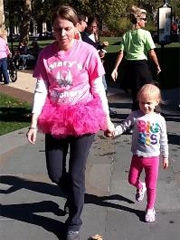 Headaches, MRI, then the diagnosis

The McKernans, of Philadelphia, were at the New Jersey shore in the summer of 2012 when Mary, then 3, began occasionally vomiting and complaining of headaches. The symptoms continued for about a week. Her parents took her to her pediatrician and the local emergency room, but no one was sure what was wrong. Finally, on July 17, her pediatrician sent Mary to CHOP for an MRI.

Before Mary woke up from sedation and rejoined her parents, they received a phone call from her pediatrician, who told them that Mary had a brain tumor and that someone from the CHOP surgical team would be with them soon.

Within minutes, neurosurgeon Phillip Storm, MD, arrived. He told them Mary had a tumor in the cerebellum, the lower portion of the brain.

“My wife and I were in complete and utter shock after the phone call. Everything was happening so fast, but Dr. Storm’s demeanor and confidence gave us some hope,” Tom recalls. “While we were devastated and in shock, we felt that we were in very, very capable hands.”

Dr. Storm told the McKernans that based on the tumor's location, he would likely be able to remove the entire tumor.

“We came out of the meeting feeling that this is a hopeful situation,” says Mary’s mom, Tricia. “His confidence gave us faith to just believe.”

Mary was admitted to the Pediatric Intensive Care Unit (PICU).

“Mary didn’t understand much,” Tom says. “She just knew that she had a headache and that being in the hospital would help her feel better. Everyone at CHOP was extremely compassionate and understanding. They spent a lot of time answering our questions because we were unable to remember half of the stuff we heard. We felt numb and that everything was a blur.”

During surgery three days later, Tom and Tricia were joined in the waiting room by many friends and family members. A nurse came out with an update from the operating room every hour, reassuring them each time.

After seven hours, they were called into a consult room to meet with Dr. Storm. He had been able to remove the entire tumor, but he suspected medulloblastoma, a rare cancer. Pathologists quickly confirmed this diagnosis. While the news that the tumor was malignant was very difficult, the McKernans were heartened by the fact that Mary’s cancer was not metastatic (had not spread).

Mary spent a week in the Hospital to recover, and then was able to spend some time at home.

She returned in August to begin chemotherapy. Mary’s treatment was overseen by Jane Minturn, MD, PhD, one of nine neuro-oncologists on staff (neuro-oncologists have special expertise in brain cancers). Care for every child at CHOP with a brain tumor is a group effort, with surgeons and oncologists working together to devise the best plan for chemotherapy and radiation based on the specific tumor type.

For the next nine months, Mary was in and out of the Hospital for chemotherapy and three stem-cell transplants.

“She would come up with all kinds of ideas of things to do,” Tricia recalls. “She would want to play hide and seek and go to the playroom. She would pretend she was the ice cream man or that her hospital bed was a boat in the middle of the ocean.

One of her occupational therapists even purchased a toy fishing pole and fish. She filled a basin with water and Mary would fish from the edge of her bed when she was too exhausted to move.”

Art and music therapists and child life specialists also helped keep Mary busy. Her parents hung her art on the walls of her room.

The team helped get her through the toughest parts. When Mary refused to take a particularly bad-tasting medicine, a nurse mixed it with grape juice and called it “super power purple juice.” Mary drank it.

“The nursing teams are phenomenal here,” Tricia says. “Mary just loved every nurse she had.”

Mary’s treatment concluded with six weeks of proton therapy. Just a few years ago, radiation for brain tumors in children could cause irreparable damage. With proton therapy, a much more precise beam of radiation is applied, sparing surrounding brain tissue.

During Mary’s proton treatment, radiation was applied only to the tumor bed and a tiny margin around it. CHOP is one of just a few institutions to provide pediatric proton therapy.

“We were so fortunate to have that option available so close to home,” Tom says.

Mary’s final proton therapy session was April 2, 2013. She was surrounded by family and friends as well as the nurses, doctors and staff who were on her radiation team when she rang the bell signifying the end of active treatment. Mary’s follow-up care at CHOP will continue for years to come. Medulloblastoma requires very close monitoring, including regular brain MRI studies.

“We feel so fortunate to live in Philadelphia and to be so close to CHOP,” Tricia says.

When Mary first came home, her 2-year-old brother, Thomas, would run by her and grab toys right out of her hands. Her parents knew she was getting stronger when she began to refuse to relinquish the toys.

Nearly a year after became sick, Mary resumed ballet lessons. She will return to pre-school this fall. “For her to be able to play with her brother every day feels amazing,” Tricia says. “Every morning when we wake up at home now, for us is just amazing.”

Mary was selected as a Patient Ambassador for the 2013 Four Seasons Parkway Run & Walk. This annual event raises funds to support pediatric cancer research at CHOP. You’ll be able to recognize all the members of Mary’s team, “Mary’s Marchers” — they’ll be wearing pink tutus.

Breakthrough stories like Mary's are made possible, in part, thanks to generous donations to the Cancer Center. With your support, we can provide innovative care, pioneering treatments and lifesaving cures to more children — today, tomorrow and for years to come.