Even when Dakota was an infant, her mom knew her daughter's chronic symptoms indicated something was very wrong with her. After local physicians dismissed her concerns, doctors at Children's Hospital of Philadelphia (CHOP) were able to pinpoint the right diagnosis and offer Dakota the support and hope she needed. 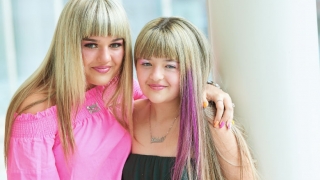 From the start, Melanie knew something was not right with her baby. At birth, Dakota was "a little floppy," had trouble swallowing and gastrointestinal difficulties including constipation and vomiting. Melanie and Christopher, Dakota’s dad, sought advice from several pediatricians and specialists near her family's home, then in Staten Island, NY. They all dismissed them as typical infant issues. “No one listened to me," Melanie says. "They told me I was just panicky.”

Melanie wasn’t convinced. By 15 months, Dakota's verbal skills were great — she could talk fine — but her gross motor skills continued to lag. She couldn’t sit up on her own, or walk yet. A local specialist suggested Dakota may have benign hypotonia, more commonly known as low muscle tone. This explained some of her symptoms and Dakota continued to do well overall. She reached many of her developmental milestones —  just a bit later than her peers.

Still, something seemed different about Dakota. Melanie, and even the teachers at Dakota’s preschool, were concerned there was more going on within the little girl that doctors hadn't yet diagnosed.

Dakota continued school and activities until she was 7 years old, when she became very sick.

“She had a 105-degree fever for a week; she couldn’t swallow or eat,” says Dakota’s grandmother, Carol. “We took her to the local ER every night for three weeks. All they would tell us is to give her more Tylenol and Advil.”

Finally, thanks to advocacy by Dakota’s family, a local hospital performed a spinal tap and MRI on Dakota to get more information about what was causing her symptoms. Based on those results, doctors diagnosed Dakota with acute disseminated encephalomyelitis, or ADEM for short, a rare condition in which the immune system attacks the brain. Dakota was admitted for treatment.

After years of misdiagnosis locally, Melanie wasn’t confident doctors had finally determined what was really wrong with her daughter. She wanted a second opinion.

“Friends of ours had a child who had been sick, and they told me to go to CHOP. They said it was the best hospital in the world for kids,” Melanie says. “I did some more research and then made an appointment with Dr. [Amy] Waldman.”

“It had been so frustrating for seven years to not have anyone listen to us,” Melanie says. “Dr. Waldman spent hours with us. She told us, ‘You came to the right place. I believe you and we’re going to get to the bottom of it.'”

Dr. Waldman suspected Dakota had a mitochondrial disease, not ADEM, and ordered a series of tests to confirm it.

It took six months to get all the results, and Melanie and her family were called back to CHOP. “A bunch of people we didn’t know came in — social workers, a geneticist,” says Carol. “I saw their name tags and thought: ‘This can’t be good.’ ”

Instead of ADEM, Dakota was diagnosed with Leigh syndrome, a severe neurological disorder that causes a progressive loss of mental and movement abilities and often leads to respiratory failure. Dakota's condition was caused by mitochondrial complex V deficiency, a mitochondrial disease for which there is no cure yet.

“I had done my research while we waited for the test results. I knew if she had this it was deadly," says Melanie. "It wasn’t the answer we wanted — but at least it was an answer. Ten different doctors saw her before we got to CHOP, and no one picked up on it.”

Mitochondrial diseases damage the structures that act as powerhouses for each cell. As the disease progresses, the cells no longer have enough energy to function, causing cell damage and disease. 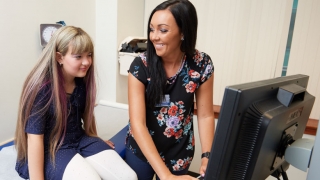 Dakota's condition was serious: Tests showed Dakota had extensive damage to her brain. But there was good news: She was functioning well beyond what doctors would have expected given the extent of her disease. “It’s amazing that she’s even here,” says Melanie.

While there is no treatment for Leigh syndrome, Dr. Ganetzky did have suggestions to support Dakota’s overall health and improve her quality of life. For example, Dakota takes a combination of vitamins and other nutrients called the mitochondrial cocktail, which includes prophylactic arginine to decrease the chance of metabolic stroke — an acute condition that can cause neurological damage. In addition, Dakota sees a variety of CHOP-recommended local specialists including cardiac, neuropathy and ophthalmology as part of her supportive care.

Dakota’s done well on the regimen, virtually eliminating metabolic strokes, and bouncing back quicker when she does have them. Her family attributes that in part to the guidance CHOP can provide when she must go to her local ER in northern New Jersey.

“We tell our local doctors: ‘You don’t start treatment until you call CHOP,’” says Melanie. “No one locally knows as much about her condition as the doctors at CHOP.”

Family and physicians working together

At home, Dakota’s family takes steps to bolster her health. She eats a high-quality diet and gets plenty of rest to fend off fatigue. She is homeschooled now, since even minor viruses can stress her body enough to trigger a metabolic stroke.

She and her family are also helping the CHOP physicians who have supported her. Dakota is enrolled in a study to better understand the metabolic effects of mitochondrial disease. That includes studying her (and other patients’) cells as well as reviewing surveys regarding her diet, sleep habits and more to learn more about the disease and discover better ways to support patients and screen for the disease earlier.

“CHOP is trying to make a breakthrough and they are so encouraging with Dakota,” says her grandmother, Carol.

“They listen to us, encourage us in what we are doing and guide us in ways other people did not. They are coming through for Dakota.” 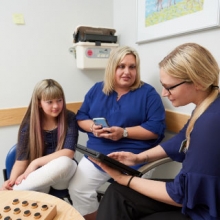 Despite the serious prognosis, Dakota, now 11, and her family focus on making the most of every day. “Every day she wakes up is a good day,” says Melanie.

Dakota had to give up some of her hobbies, like horseback riding, but she enjoys art and playing with her kitten and three dogs — one of which she named Chops, in honor of the hospital. She loves time at the beach and going out with her older sister Meadow and brother Skylar to shop and see movies. Her day-to-day symptoms include balance issues, low muscle tone and getting easily fatigued.

“She’s holding her own,” says Melanie. “She’s an outgoing girl. She makes friends easily and talks to everyone.”

There have been challenges, of course. Dakota can’t do some things she would like to and being out of school has made it harder to socialize. “But she has a lot of tenacity and fight. She doesn’t focus on what she’s missing,” says Melanie. “She talks about working when she gets older.

"My hope is that CHOP comes up with something [to help her]," Melanie adds. "Because if anyone does, it will be them.”