Gianna and Vincenzo sadly lost their daughter, Giuliana, to a serious form of mitochondrial disease. They are grateful to Children’s Hospital of Philadelphia for improving the quality of Giuliana’s short life, for never giving up on her, and for the genetic guidance that has helped them have two more children, both free of the disease. The family’s story highlights the importance of funding research to find a future cure. 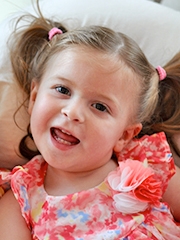 Giuliana was born in Italy, and in her first few months of life, appeared to be developing as a healthy baby. She was able to hold her head up soon after birth, and learned to roll over in early infancy. But when she was 3 months old, her first-time parents, Gianna and Vincenzo, noticed that she was starting to miss some key milestones, and her eyes started moving abnormally.

Both parents were concerned, but their doctors in Italy were not. They told the couple they were being overly anxious, that Giuliana’s development was within the normal range, and that the eye movements were likely a temporary issue. Unconvinced, Gianna asked for an MRI to see if there might be a problem in her baby’s brain. The request was denied.

Two months later, when Giuliana was 5 months old, she came down with a fever, and suddenly lost many of the skills she had developed. She could no longer hold her head up. Finally, the doctors ordered an MRI, which showed damage to Giuliana’s brain stem and basal ganglia. Additional imaging revealed high levels of lactic acid in the damaged areas.

The doctors explained that the brain damage and the concentration of lactic acid were both signs of mitochondrial disease, a condition in which mitochondria — the energy-producing batteries in our cells — don’t function correctly. Depending on which cells and organs have low-functioning mitochondria, the disease can cause a wide range of health problems. In Giuliana’s case, mitochondrial disease was affecting her brain and nervous system. It was too early to tell what other organs might become affected as the disease progressed.

“They gave us the diagnosis and left us with no hope,” remembers Gianna. “They said we should take her home and let things take their course, let her pass away. I wouldn’t take that for an answer.”

Gianna did her own research and found the United Mitochondrial Disease Foundation (UMDF). Through that organization, she learned about doctors and hospitals with special expertise in the disease. The one who stood out in her research, and in references from people she contacted, was Marni Falk, MD, attending physician and Executive Director of Mitochondrial Medicine at Children’s Hospital of Philadelphia (CHOP).

A trip overseas to CHOP

Gianna is originally from New Jersey, so she was familiar with CHOP’s expertise and reputation. She contacted CHOP, sent Giuliana’s medical records, and made an urgent appointment to have Dr. Falk examine her daughter.

“Dr. Falk did a very thorough evaluation,” says Gianna. She also offered two options that the doctors in Italy had not. “She explained that treatment with a special combination of vitamins — a “mito cocktail” — could be helpful in slowing the progression of the disease. And she offered us the opportunity for genetic testing.”

There are many types of mitochondrial disease, which are now known to result from mutations in nearly 300 different genes, and researchers are still working to identify more and develop tests to confirm each diagnosis. Knowing the genetic cause of Giuliana’s disease might help in tailoring her treatment, and knowing whether Gianna and Vincenzo were carriers of a genetic disorder could help them better plan as they considered expanding their family.

Even before the results of the genetic tests came back, Dr. Falk was able to give Giuliana a more specific diagnosis. She had a form of mitochondrial disease called Leigh syndrome. Symptoms of Leigh syndrome usually appear in the first two years of life, typically after a fever or infection, and include loss of basic skills, such as head control, breathing regulation, swallowing, walking and talking. Scans show damage to the brainstem and midbrain. Like many other types of mitochondrial disease syndromes, Leigh syndrome can be caused by more than 90 different gene disorders, across all possible patterns of inheritance.

Gianna and Giuliana did not return to Italy. They stayed in New Jersey for access to care at CHOP. Vincenzo, who is an Italian citizen, was able to move to the U.S. soon after.

The importance of research

“We started Giuliana on the vitamin supplements right away,” says Gianna. “That seemed to help. She started regaining some skills. She was able to reach for toys again. She became more engaged, more aware of what was going on around her.”

Dr. Falk also arranged for Giuliana to be seen by a team of other specialists across CHOP with organ-specific mitochondrial disease expertise, as her disease caused an array of health problems that needed to be screened for and managed.

Blood samples for the genetic tests were taken from Giuliana and her parents in January, and in early April, Dr. Falk was able to tell the couple that she had found the answer. Giuliana had two disease-causing mutations in one of her nuclear DNA genes, NDUFS8, that encodes a subunit of complex I in the mitochondrial electron transport chain. Both parents had different mutations of that gene, and Giuliana had inherited them both, confirming autosomal recessive inheritance of her mitochondrial disease.

Currently, there is no cure for mitochondrial disease. But more research into the disease can help physicians focus on providing a better quality of life for patients, catch treatable complications early, and develop and test new therapies to improve patient outcomes.

Understanding the precise genetic basis of Giuliana’s disease also empowered the couple to effectively use that knowledge to have more children. Gianna and Vincenzo have since had two healthy children, the first was born when Giuliana was 2

A hope for the future

In spite of her chronic illness and disabilities, Giuliana lived a mostly health life. She went to CHOP frequently for tests and therapy, but was never hospitalized until her final weeks, when she developed severe difficulty breathing after getting the common cold.

“She was a happy little girl,” says Gianna. “She smiled and laughed all the time. She was very engaged with us. My husband was the best at making her laugh.”

Giuliana sadly passed away just before her third birthday, when the respiratory infection proved to be too much for her weakened immune system and the acute stress resulted in severe neurologic decompensation.

“For the disease that she had, she lived a good life,” says Gianna. “Dr. Falk never gave up on her. The medical team at CHOP always did everything they could to give her the best quality of life possible. Anything that could help her, she got. We were so lucky to have her for the time we did. She will always be part of our family.”

Today, the family remains active with the mitochondrial community and participates in events like the annual UMDF energy-for-life walk. They understand that funding research can lead to future therapies and treatment for patients with mitochondrial disease, and work hard to spread this message. Discoveries related to Giuliana’s disease may also have applications for other diseases in which a failure in mitochondrial functioning plays a role, including more common conditions like Alzheimer’s disease, Parkinson’s disease, diabetes, and even aging.