Juliet was diagnosed with an unknown form of mitochondrial disease as a baby. After years of tests and research, Children’s Hospital of Philadelphia (CHOP) discovered that she was the first patient in the world to have a rare form of mitochondrial disease caused by a mutation of the nuclear gene FBXL4. Identifying the specific gene mutation has helped physicians diagnose 80 more patients worldwide and has led to new research that will drive future breakthroughs.

When Juliet was born, she appeared to be a normal, healthy infant. But three days later, she started to show signs that something was wrong. She was very lethargic and wouldn’t eat, and her temperature dropped to 93 degrees.

Janice and Mike, Juliet’s parents, brought her to their local hospital, where the medical team stabilized her condition with IV fluids. When she was nursing again, she was cleared to go home.

“When Juliet was 4 to 5 months old, she began to miss the developmental milestones,” remembers Janice. “She wasn’t holding her head up, and she didn’t recognize voices.”

A visit to the pediatrician led to an appointment with a neurologist, where a blood test showed extremely high levels of lactic acid. This is an indication of mitochondrial disease, a condition in which mitochondria — which produce energy in cells — don’t function as they are supposed to. Depending on which cells have low-functioning mitochondria, the disease can cause a wide range of health problems, including fatigue, weakness, developmental disabilities, seizures, strokes, vision or hearing loss, growth and feeding difficulties, and serious problems with heart, liver or kidney function.

There are many types of mitochondrial disease, which are now known to result from mutations in nearly 300 different genes, and researchers are still working to identify them and develop tests for diagnosis. At the time, Juliet’s symptoms and lab tests didn’t match up with any of the known forms of the disease. She was diagnosed with presumed mitochondrial disease, but the family was searching for more specific answers. 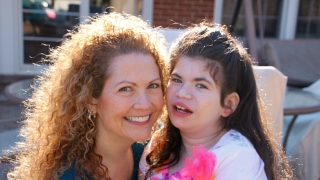 Through her early childhood, Juliet continued to suffer from a series of medical problems. Her immune system didn’t have the energy to fight even the mildest diseases. What would be a minor cold for other children would send her to the hospital. She was unable to swallow solid food, had problems with digestion and difficulty gaining weight.

The family lives in the Philadelphia area, so they began to go to Children’s Hospital of Philadelphia for some of her treatment. There, Juliet came under the care of several different medical specialists, who helped her to manage her ongoing medical problems.

Years of research leads to a world’s first diagnosis

Among the doctors at CHOP who cared for Juliet was Marni Falk, MD, attending physician and Executive Director of the Mitochondrial Medicine Frontier Program. Dr. Falk was determined to understand the specific nature of Juliet’s disease so that treatment could be developed that was tailored to her unique needs.

Dr. Falk began digging deeper. With the family’s consent, she performed research testing on blood samples from Juliet and both parents that involved whole exome sequencing, a test in which lab personnel use high-tech machines to read and analyze the genetic code of all 20,000 genes. She also evaluated information from all of Juliet’s previous tests, including a muscle biopsy performed when she was 1 year old.

Juliet’s diagnosis wasn’t an easy or a fast process. Juliet didn’t have any of the chromosomal or obvious gene abnormalities associated with the types of mitochondrial disease that were known at the time. It took a massive effort to examine Juliet’s entire genome to look for other abnormalities that might be the cause of her disease. Dr. Falk was aided by academic researchers at other institutions. In the end, it took four years of studying her genetic data to find the needle in her genetic haystack, definitively pinpointing the faulty gene.

When she was 8, Juliet became the first patient in the world to be diagnosed with a rare form of mitochondrial disease caused by a mutation of the nuclear gene FBXL4. Since then, more than 80 additional cases have been identified worldwide.

“Knowing the specific mutation made a huge difference to us. It gave us hope. Now we can start from somewhere and look for effective treatment.”

Because Juliet is the first patient in the world diagnosed with an FBXL4 gene disorder, methods are still being explored to personalize her care. But it is important knowledge that is influencing additional research into new treatment options. Dr. Falk’s expertise in mitochondrial disease has also helped guide the rest of the medical team caring for Juliet.

“CHOP has offered us hope toward treatment and even a cure for Juliet’s condition. That’s why supporting Dr. Falk’s research is so important to us.”

“Juliet lights up a room with her smile and laughter”

Juliet, now 13, has low muscle tone due to her disease, so she’s unable to sit, stand or walk without support, and she is unable to speak. Technology enables her to respond to questions in school through retinal eye reads on a special computer. She also communicates with her demeanor. She loves the special people in her life and the other children in her school, and shows it with her smiles and laughter and by reaching out for hugs.

“Juliet lights up a room with her smile and laughter,” says Janice. “The other kids love her. She’s happy to be alive, to have friends, to go to school, and she shows it.”

She loves to be read to by her parents. She has scores of favorite books and laughs at the funny parts. Juliet also loves craft projects. “Anything she can get her hands into and make something,” says Janice.

Sadly, Juliet has passed away. We will continue to fight for a cure.

With your help, we can continue making advances that will deliver the best possible outcomes for children and adults with mitochondrial diseases.