Lincoln, 5, has limited abilities due to mitochondrial disease, but he’s a happy child, full of smiles and laughter. His parents are grateful to the team of specialists at Children’s Hospital of Philadelphia who have worked together to diagnose his condition and constantly fine-tune his care. 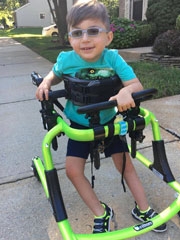 Lincoln was a healthy baby for his first three months, crying when he was unhappy, and smiling and engaging with his parents, Dyna and Robert, when he was happy. But unexpectedly, he stopped smiling, and then he stopped looking at his parents’ faces. “He looked past us,” Dyna remembers. “Then he started doing these weird crying things, which we later learned had a name —infantile seizure disorder.”

The first mention of mitochondrial disease

Their pediatrician referred them to a neurologist, who did an MRI of Lincoln’s brain. “That was the first mention of mitochondrial disease,” says Dyna. Lincoln was 5 months old. It wasn’t offered as a diagnosis, just listed as one of the possibilities. When they did their own research on the condition, it appeared to fit with Lincoln’s symptoms.

Mitochondrial disease is a condition in which mitochondria — which produce energy in cells — don’t function correctly. Depending on which cells have low-functioning mitochondria, the disease can cause a wide range of health problems, including fatigue, weakness, exercise intolerance, developmental disabilities, seizures, strokes, vision or hearing loss, growth and feeding difficulties, immune deficiency, hormone problems, acute decompensation, and serious problems with heart, liver or kidney function.

Lincoln wasn’t hitting any developmental milestones. He could sit up, but otherwise his development had come to a stop. He wasn’t communicating, trying to crawl, or able to reach for and grab things. Lincoln also wasn’t eating well or growing.

Doctors provided an initial diagnosis — failure to thrive. His doctors put in a G-tube to feed his stomach directly through a port on his abdomen, after which he started to grow again. But his development otherwise remained at a standstill.

When Lincoln was 18 months old, Dyna and Robert were referred to a genetic specialist, but still couldn’t find a more definitive diagnosis. “She could not tell me if it was mitochondrial disease,” says Dyna. “I asked her if it could be something else and she said ‘no.’ But she couldn’t give me a definitive answer.”

Dyna and Robert were frustrated, and they were worried for the health of their son. Through their own research, they had found out about the United Mitochondrial Disease Foundation (UMDF). This family support and advocacy organization had begun to contact parents whose children had been diagnosed with mitochondrial disease, and connected them with one another. A parent from the network urged them to see Dr. Falk in Philadelphia.

Marni Falk, MD, is an attending physician and Executive Director of the Mitochondrial Medicine Frontier Program at Children’s Hospital of Philadelphia (CHOP). Dyna contacted Dr. Falk’s office and made an appointment for Lincoln.

“Dr. Falk spent seven hours with us in that first visit,” Dyna says. “She did comprehensive tests on Lincoln to understand what was causing his condition, and took samples for genetic tests on Lincoln, Robert and myself.”

The initial tests indicated he did have a mitochondrial disease, but didn’t provide enough information for a specific diagnosis. There are many types of mitochondrial disease, which are now known to result from mutations in nearly 300 different genes, and researchers are still working to identify them and develop confirmatory tests for diagnosis. Knowing the genetic cause of Lincoln’s disease might help in further tailoring his treatment, but analysis of genetic test results takes time.

As part of that first visit, Dr. Falk prescribed a special combination of nutrients, vitamins and co-factors (often called a “mito cocktail”) to supplement the formula Lincoln was getting through his G-tube. It made an immediate improvement in Lincoln’s health. Lincoln had been getting sick every couple of weeks with colds and other bugs. After he started on his custom mito cocktail regimen, the frequent illnesses stopped. He still gets sick sometimes, but only a couple of times a year.

Six months after their first visit, Dr. Falk had the results of the genetic tests. Lincoln had a form of Leigh syndrome, one of the many types of mitochondrial disease. His specific form was a complex I deficiency. In his case, it resulted from a spontaneous genetic defect in the ND5 mitochondrial DNA gene, a mutation not inherited from either parent, but known to cause Leigh syndrome in other children

“That was very good to know,” says Dyna. It had been 2 1/2 years since Lincoln’s symptoms began, and the family finally had a diagnosis. “It was also very scary to know. Dr. Falk explained that this is not one of the ‘good’ kinds of mitochondrial disease.”

Treatment by a team of specialists 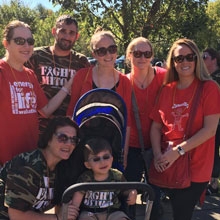 The diagnosis enabled Dr. Falk to refine Lincoln’s treatment plan. She modified the “mito cocktail” to add several more vitamins. And she gave his parents a list of 11 hand-picked specialists at CHOP who had agreed to become part of Lincoln’s medical team.

The family sees all of these specialists now, at different frequencies. Included on Lincoln’s team are Zarazuela Zolkipli Cunningham, MBChB, MRCP, an attending physician in the Mitochondrial Medicine Frontier Program, who advises on neurological and social issues; Elizabeth McCormick, MS, CGC, a genetic counselor in the center; and nutritionists who have constantly adjusted Lincoln’s diet as he grows.

“I am continually impressed by how well this large team of specialists works together.”

“They read each other’s notes and discuss Lincoln’s care to make sure he is getting what he needs. It’s so different from my experience at other hospitals," says Dyna.

And it is not only the medical team members who have been critical to Lincoln’s care. A social worker has helped the family find helpful support programs, including guidance on getting Medicaid coverage in New Jersey for services he needed.

Now 5, Lincoln attends a special school where he receives physical and cognitive therapy, with guidance on his needs and abilities from CHOP. He can now stand with support and is learning to walk with a gait trainer.

“He’s happy 98 percent of the time,” says Dyna. He’s constantly laughing or smiling.” Lincoln is clearly a people person. It’s people who make him happy, especially the people he knows. He loves his mother to hold and cuddle him, leaning in to rest his head on her shoulder. His father and big brother are always making him laugh. And he has ways of making them laugh, too, which he enjoys. Some of the specialists he sees at CHOP are in this inner circle. He’s happy to see Dr. Zolkipli-Cunningham, and will reach out to her when she comes in the room.

“I don’t know where we would be if we hadn’t come to CHOP. They gave us the diagnosis. They are working toward a cure. They are very concerned about us. And they know Lincoln. They know this condition is different for every kid, and the specialists work together to give him the best possible care and the best possible life.”