Nora celebrated her first birthday in August, with more than 50 people traveling from far and wide to share the joy of Evan and Kristelle’s miracle baby. 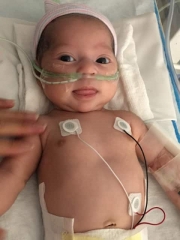 Noah in the hospital To understand why a 1-year-old’s birthday was an especially big deal, you have to go back to 2016.

That was when their first child, Noah, was born. When he was a few days old, it became clear that something wasn’t right. The family brought him to Mount Sinai Hospital in New York City, where he was diagnosed with a severe mitochondrial disease manifesting as Leigh syndrome, characterized by seizures, respiratory failure, and profound weakness.

Noah’s doctors consulted with Marni Falk, MD, Executive Director of the Mitochondrial Medicine Frontier Program at Children’s Hospital of Philadelphia (CHOP). “She said our doctors in New York were already doing everything possible,” Evan says. “There were no additional treatments or cures to help him, just supportive care.” Noah’s condition rapidly progressed, and he passed away at 3 months old.

When Noah got sick, Kristelle talked to her family. Had anyone experienced something like what they were going through? “One of my aunts lost a baby at a year old, but that was in the Philippines, where I’m from,” she says, “and there was no genetic testing.”

From heartbreak to determination

Once the heartbreak eased, Kristelle and Evan were determined to have another child, “but do it safely,” Evan says. “As a physician assistant, I have research-driven thinking. I read every article and learned as much as I could.”

One intriguing method was preimplantation genetic diagnosis (PGD). Using in vitro fertilization (IVF), eggs from the mother are fertilized in the lab using the father’s sperm, and the resulting embryos are tested to determine the precise risk of whether they harbor the family’s specific form of mitochondrial disease. An embryo identified as having no or lower risk of carrying the family’s know variant is transferred in the mother, where it will hopefully result in the development of a healthy baby.

Noah’s specific disease stemmed from a m.14709T>C mutation in the mitochondrial DNA (mtDNA) that appeared to be homoplasmic, or present in 100% of his body’s cells. Since mtDNA is exclusively inherited from the mother, Kristelle and several of her family members underwent mtDNA testing to see if they might be carriers for the same mutation. Results showed a wide range of their mtDNA percentages also harbored the same the m.14709T>C mutation. Kristelle had an 80% level of heteroplasmy, or “mutation load,” despite being symptom-free, physically active and healthy. Her mother and siblings, who are also symptom-free in terms of having Leigh syndrome spectrum symptoms, ranged from having 27% to 40% mutation loads.

First: A check-in with CHOP

PGD for genetic diseases has been happening in the United States for more than a decade in cases when the gene causing the disease originates in the nuclear genome. But using PGD to reliably and accurately test for mtDNA genome mutations has not generally been possible. More research led the family to Newcastle University in the United Kingdom, which has developed the most advanced methods to help families identify embryos most likely to be healthy in a family with a known mtDNA disease like Noah experienced.

“Before we moved forward, we wanted to see what Dr. Falk had to say about it,” Kristelle says. “We sought her guidance because we value her opinion.”

Up to that time, there were no clinical laboratories able to perform the sensitive testing needed to safely perform this procedure in the United States. However, labs in the United Kingdom (UK) and Europe had begun to make meaningful advances in understanding how to safely apply new technologies to help families facing this challenging problem.

Evan says, “She thought it would be great since the latest studies showed it can be a safe and effective method to have an unaffected child.”

Off to England — three times 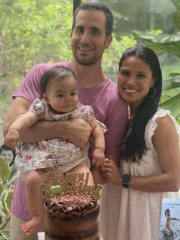 Evan, Kristelle and Nora on Nora's first birthday The process was complicated. Frozen three-day-old embryos that had been established in the United States were flown to the UK, where each was tested to determine their precise mtDNA mutation load. Only those with a safe, lower-level percentage mutation load were transferred into Kristelle. Even so, the chances of establishing a successful pregnancy following IVF with PGD are known to be far from guaranteed, particularly in women who carry a mtDNA mutation.

Four IVF cycles, three trips to England — the third coming during early in the COVID-19 pandemic when they received special permission to fly and were two of five passengers on the plane — and six embryo transfer cycles later, Nora arrived.

“This consumed our lives during the time we were going through it,” Evan says. “It was a heck of a journey. But to see the end result, to see Nora, we know it was all worth it.”

Nora is free of symptoms 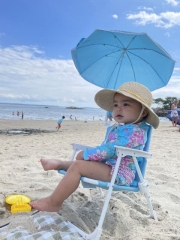 Nora loves the beach While Nora carries the m.14709T>C mutation, it is at a much lower level than that seen in her brother or her mother. Happily, she shows no signs of any Leigh syndrome or other medical symptoms. At 1 year old, she’s taking her first steps, crawling up and down the steps of their Westchester County, NY, home, and babbling constantly, even saying “quack quack” and “bow-wow.” She’s hitting all her milestones and is sleeping 11 to 12 hours most nights. And when she laughs her infectious laugh, everyone laughs along.

Nora’s mtDNA from her cheek, saliva and blood have all been tested, and her current mtDNA mutation heteroplasmy load is closely in line with the “safe” percentage that diagnostic testing of her embryotic cells predicted.

During the years between Noah’s passing and Nora’s birth, Kristelle became a patient of CHOP’s Mitochondrial Medicine Frontier Program and began to see Dr. Falk and Clinical Director Amy Goldstein, MD. “The time and energy those two doctors gave us blew us away,” Evan says. “I really don’t think we would have pursued PGD if they hadn’t given us their blessing.”

Recently, Kristelle and Nora came to CHOP for back-to-back appointments. Their visit was more than two hours long, mostly taken up by conversation surrounding Nora’s miraculous story and incredible feats. While she does not have Leigh syndrome, Nora will continue to be carefully monitored throughout childhood for any signs of mitochondrial dysfunction or disease. “Everything went perfectly,” Evan says. “Dr. Falk was very impressed with Nora’s development. The plan is for her to see Nora once a year.”

Blazing a path for other U.S. families

The family’s trailblazing journey to having a symptom-free baby was arduous. Other families facing a similar challenge will have a slightly less complicated route that doesn’t require them to travel to England, thanks to Dr. Falk. Indeed, because of these early efforts, further process improvements have been made to benefit future families with known mtDNA disease. Families may now undergo both the IVF cycle and embryo implantation in the United States, with only cells from the embryo being shipped for diagnostic testing to the UK.

“Dr. Falk helped to pioneer the path for future families,” Evan says. “It’s exciting for us to help others in that way. We already know of two other families who’ve had children using this program.”

When Noah passed away, Kristelle and Evan raised money for mitochondrial disease research. They have another goal. It is their hope that future generations, including Nora, will have great opportunities to have healthy children.