There’s a saying painted on 17-year-old Allison Reed’s bedroom wall: “Life isn’t waiting for the storm to pass, it’s about dancing through the rain.” Since being diagnosed with multiple sclerosis (MS) at age 14, that quote has taken on an even greater meaning. 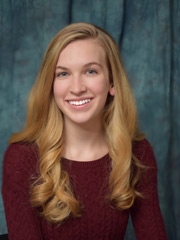 Now, Allison quite literally dances her way through the disease, determined to maintain the same sense of joy she’s always had. “Dance is still my happy place, just as it was before my diagnosis,” she says.

Other things have stayed the same: She and her close friends still have their “girls’ night” sleepovers, complete with movies and manicures; she’s still at the top of her class; and her dream of one day performing on Broadway is as bright as ever.

If anything defines Allison, it’s dance and musical theater. She started dance lessons when she was 4 years old and now does tap, jazz, ballet, lyrical and contemporary. When her first symptoms of MS started, including numbness in her feet, she thought it was pins and needles and somehow related to rehearsing and performing in her high school musical.

Her pediatrician referred her to CHOP’S Specialty Care Network location in Princeton to see a pediatric neurologist, who immediately recommended that Allison undergo testing with the neurology team at CHOP’s Main Hospital in Philadelphia.

Allison was admitted on a Tuesday for blood tests, an MRI of her brain and spine, and a spinal tap. By Thursday, she had the results. Allison still remembers what it was like to learn she had MS from her healthcare team at CHOP, which included Brenda Banwell, MD, chief of the Division of Neurology.

“Although I was upset, I distinctly remember the way Dr. Banwell came into the room and spoke to me first, and not to my parents,” says Allison. “She explained the disease to me and made sure I understood everything about MS and the treatment options. After all, I was the one with the diagnosis. This was my disease now,” says Allison.

In people who have multiple sclerosis, the immune system attacks the protective coating (myelin) around nerve fibers. This disrupts the signals within the brain and between the brain and body. Fatigue is one symptom of the disease, but periodic attacks of MS (referred to as relapses) damage the central nervous system and cause more serious symptoms, including numbness and weakness.

As she grappled with her new diagnosis, Allison continually received reassurance from Dr. Banwell: “She let me know I could still hang out with my friends, I could still go to prom, still dance, still go to college, have boyfriends, get married, and have children someday,” says Allison.

Allison has held fast to that rosy picture of the future, a vision that helps her through fatigue and relapses. Allison has what’s known as relapsing-remitting MS: periods of relapse involving severe fatigue, numbness and other symptoms that are often infrequent and followed by long periods of remission, or feeling relatively good.

Allison has had three relapses since her diagnosis three years ago. During relapses, she spends three to five days at CHOP. There, she receives several rounds of treatments, including IV steroids or intravenous immunoglobulin (IVIG).

During the good periods of remission, Allison still deals with some fatigue. She also injects a medication every two weeks that leaves her with flu-like symptoms for hours afterwards, sometimes interfering with her plans for the weekend.

Her parents and brother are a tremendous source of strength and see her through the many struggles. “My family tries to plan fun activities on shot nights. It helps to distract from the symptoms I happen to be feeling that night,” she says.

Her friends, too, offer key support. During the first year of her diagnosis, Allison added another set of confidantes to her list: New friends she made at a camp in Rhode Island for kids with MS. Allison loved the experience, and came home from camp with an even greater sense of confidence about handling her disease.

“It helped that I didn’t feel alone anymore,” says Allison. “I met kids with MS from all over the world. I met an 18-year-old girl who became a great support for me and helped me to understand that even though MS is awful, life can still be great!” 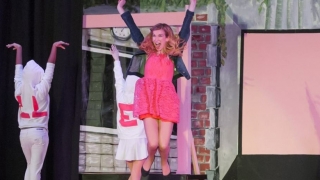 Allison performing as the lead in a 2016 production of Legally Blonde. Photograph by Premier Photography. And through any struggle along the way, dance has never let her down. “I knew right away I’d never let go of dance because of my diagnosis,” she says. “Even if I have symptoms all the time, I’m still not willing to give up dance. Dance is one of the best things in my life. I love it, it makes me happy, and it helps me to just get away from a rough day.”

“Allison’s love of dance just oozes out of her pores. Whenever she’s feeling overwhelmed with school or other things, we say, ‘You know what, you’re going to dance class. Let the books go by the wayside.’ She needs to do something that makes her happy to alleviate some of the stress. If she’s doing something that brings her joy that makes everything else more manageable.”

In the mix of her busy life, Allison pushes her MS way down the list. If the disease has changed her at all, she says, it has made her more determined.

“I never want my diagnosis to prevent me from doing anything I want to do,” says Allison. “I’m just not going to let that happen. MS is just a part of me, but it does not define who I am.”