One-year-old Lilly is a pleasant, inquisitive toddler. She loves to figure things out, enjoys being read to and adores her older brother. She hasn’t missed a developmental milestone or needed special medical care since an innovative interventional procedure saved her life when she was just 2 weeks old.

Cortney, Lilly’s mother, is an intensive care unit nurse. So when the technician conducting her 20-week ultrasound went quiet and started studying the screen closely, she knew something was wrong.

“The doctor came in and told me there was a little bit of fluid around her lungs. They wanted to take a sample of the amniotic fluid to find out if she had Down syndrome, an infection or another medical problem,” remembers Cortney.

Cortney contacted her uncle, who’s a doctor, for guidance. He told her she should make an appointment with a specialist in fetal diagnosis at Children’s Hospital of Philadelphia (CHOP). She called, and two days later met with Mark Johnson, MD, Director of Obstetrical Services at CHOP’s Center for Fetal Diagnosis & Treatment.

Dr. Johnson ordered another ultrasound and a number of additional tests, but they were inconclusive. “He was honest,” Cortney says. “He thought it might be hydrops, but it might be something else. He couldn’t be sure.”

A third ultrasound a few days later showed even more fluid around the baby’s lungs – so much that it had pushed her heart to the side. It was estimated that the amount of fluid had more than doubled in just a few days. Tests were still inconclusive about the cause of excess fluid, but Dr. Johnson knew it was threatening the unborn baby’s life.

Dr. Johnson scheduled Cortney for a neonatal procedure the next day to put a shunt in the unborn baby’s chest to drain the fluid. The procedure was successful, but there was a risk that fluid could build up again. Dr. Johnson made arrangements for Cortney to be monitored by the medical team at the Center for Fetal Diagnosis & Treatment for the remainder of her pregnancy, and for her to deliver the baby at the Garbose Family Special Delivery Unit, where the newborn could get treatment immediately after birth.

Cortney went home after the procedure, and returned to CHOP for weekly ultrasounds and evaluations. The shunt needed to be replaced once, but fluid was prevented from building up in the baby’s chest throughout the remainder of Cortney’s pregnancy.

Lilly was delivered close to her due date at the Garbose Family Special Delivery Unit. The shunt was removed, and Lilly was placed in the Harriet and Ronald Lassin Newborn/Infant Intensive Care Unit (N/IICU) for round-the-clock intensive care.

“She was doing beautifully,” says Cortney. “The chest X-rays were perfect. Her oxygen levels and heart rate were perfect. She was eating. It didn’t seem like she belonged in the N/IICU.”

But when she was 4 days old, tests showed excessive pleural fluid appearing again. That was when Cortney and Ed, Lilly’s father, received a visit in the N/IICU from physicians with the Jill and Mark Fishman Center for Lymphatic Disorders at CHOP.

The physicians studied Lilly’s case, and they believed her condition was chylothorax, a rare condition in which lymphatic fluid leaks into the space between the lung and chest wall. When this fluid builds up in the lungs, it can cause an increased work of breathing, requiring supplemental oxygen, chest pain and difficulty breathing.

It was an unusual case in many ways. Chylothorax typically occurs alongside heart malformation, which Lilly did not have. It is also more common in boys, and the doctors had only seen it in a child so young a few times before her.

An MRI of her lymphatic system confirmed the diagnosis of neonatal chylothorax, and showed that Lilly’s right lung was on the verge of collapse. A chest tube was quickly placed, which drained the excess fluid and relieved the pressure on the lung.

Two weeks later, Yoav Dori, MD, PhD, performed a procedure pioneered at CHOP to locate and close leaks in the lymphatic system. He used dynamic contrast MR lymphangiography (DCMRL), an advanced imaging test, to confirm the location of Lilly’s leak. He then performed a minimally invasive procedure called a lipiodol injection for localized embolization of the areas that were leaking in her lungs. Lilly stayed at CHOP for a couple additional weeks while the fluid decreased in her chest tube and was removed, and until she was able to eat all of her feeds by mouth.

At 6 1/2 weeks, Lilly was released to go home. She was monitored with monthly imaging for her first six months, and Cortney and Ed were instructed to watch for signs of illness. One concern with the lymphatic abnormality of Lilly’s lymphatic system was not knowing how her body would handle an illness due to the fact that her body needs a healthy and functioning lymphatic system to fight disease. Her newly repaired lymphatic system was put to the test when Lilly’s older brother came down with the flu that winter, Lilly wasn’t affected. Her lymphatic system had likely reacted to the procedure by expanding other healthy channels for the fluid to reach its targets. 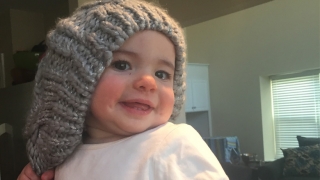 Lilly hasn’t needed another medical intervention for her chylothorax since the procedure when she was an infant. She spent the rest of her first year as a normal baby, growing and developing in the amazing way that babies do. She looks up to her older brother and likes to imitate whatever he does. She loves to be read to, and one of her favorite books is Lilly’s Chocolate Heart.

“The doctors were so caring, so supportive and so knowledgeable. When they couldn’t identify the cause, they told us not to give up on them, that they were going to figure it out. And the nurses were wonderful. They dressed Lilly in little outfits so we wouldn’t feel like she was a hospital baby. They just loved her.”

Cortney and Ed have returned that care with a big donation of clothes to “Grandma’s Attic,” the donated supply of baby clothes that the nurses in the N/IICU drew from to dress Lilly. The clothes are used every day to help families feel special and appreciated as they deal with their children’s medical treatment and recovery.

“I thank CHOP every day for what they did,” says Cortney.