Denim, 13, has learned to manage the ups and downs of living with chronic kidney disease, and music has played a large role.

Denim is smack dab in the middle, between an older and younger sister: 16-year-old Brooklyn, and Sage, who is almost 10. Together, they have a band — Diva Dollz & Company — and perform around the Philadelphia area and beyond. The lyrics and music they write provide a window into the world of everyday kids. For Denim, that window is widened to explore the emotions kids and teenagers face when they are living with a chronic disease.

Denim is driven to support kids like her who face chronic disease by performing music for them, fundraising for Camp Kydnie and other organizations, and teaching kids how to create music. Music has been healing for her, and she wants to share it with others.

Before she found music, however, Denim and her family had to adjust to a new normal after she was diagnosed with nephrotic syndrome at a young age.

Two weeks before she began the Head Start program at Logan Elementary, when she was 3 ½ years old, Denim abruptly put on weight. “She looked swollen,” explains her mom, Kisha. Her parents took her to a hospital clinic, where they were told that it was a growth spurt. “They never checked urine. They didn’t draw blood,” says Kisha.

Kisha brought Denim home with lingering doubts. Something didn’t feel right, but Denim wasn’t in pain. During the first week of school, Denim was rushed to an emergency room. Kisha’s husband, Ted, and her mother-in-law, with whom Denim was close, joined her at the hospital. When they arrived, they were shocked at what they saw. “Her eyes were swollen shut. Her feet were so big. We couldn’t recognize her,” explains Kisha.

Luckily, the head of nephrology at the hospital was passing through the ER and saw Denim. Things began to move quickly, Kisha recalls. The doctor diagnosed nephrotic syndrome.

Kidneys filter waste and excess water from the blood into urine. Nephrotic syndrome is a disorder caused by damage to the blood vessels that serve as the filtering systems for the kidneys. The damaged vessels leak too much protein out of blood and into urine, which can create swelling in the feet and ankles, known as edema, an increased risk of infection, and blood clots in the body.

The treatment for nephrotic syndrome varies, as patients respond differently to medication. In Denim’s case, she was originally treated with steroids to get the water retention and bloating under control. It took time, and several relapses, before her doctors found the right combination of medicines to keep her stabilized.

By the time she was 4 ½, Denim’s nephrologist was leaving the area and recommended the family transfer her care to Children’s Hospital of Philadelphia (CHOP), specifically Division Chief Susan Furth, MD, PhD. Denim immediately took to her new doctor.

“Dr. Furth has been so good at treating Denim and getting her stable again.”

When Denim was 9, she had a serious setback. She was walking up steps at school and felt something moving in her chest. She lay down on the floor in the hallway and asked her friends to call her mom: There was something wrong.

Denim’s body had grown resistant to her treatment and she relapsed. She had developed blood clots in her lungs and one clot in the middle of her heart. Denim was hospitalized several times at CHOP with severe edema, or swelling in the body, and acute kidney injury before her condition was stabilized. She had come close to kidney failure at one point, but Dr. Furth and her team began a new course of therapy with a high dose of steroids and the drug rituximab.

Denim is now in remission, and is being treated with the drugs tacrolimus and CellCept®. Her kidney function is excellent. Dr. Furth was with the family every step of the way, says Kisha.

Blood thinners helped remove the blood clots in Denim’s lungs, but she still has one clot in her heart that her doctors monitor every six months. Denim is very knowledgeable about her disease and monitors her symptoms. “She knows what works for her and what doesn’t,” explains her mom.

Denim’s family has attended Camp Kydnie every summer for the past four years. They learned about the camp through their care team at CHOP. Sage and Brooklyn attend as volunteers, and the girls use their performances to fundraise in support of kids who need assistance to attend. It’s Denim’s mission, explains her mom, to make sure every kid who wants to come to Camp Kydnie is able to do it.

When Denim was seriously ill, music alleviated the depression she felt. She is committed to using music to lift the spirits of others. She and her sisters perform in hospitals, bringing along a laptop and beat machine to show other kids how to create music. Her parents spend time counseling other families who are dealing with a new diagnosis. 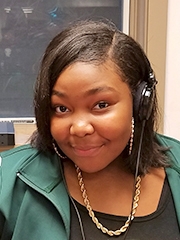 Denim performs under the name Q-DEE for the Diva Dollz & Company. The “company” in the band refers to the girls’ cousins — all boys — who serve as backup dancers. One of them is a young cancer survivor. They’ve performed more than 350 times for kids in hospitals and at events such as the Odunde Festival in Philadelphia, during half time at a Philadelphia 76ers game, and even for LL Cool J and the family of Jada Pinkett Smith.

“Positive music makes you feel better no matter what your diagnosis is,” explains Kisha. “We are hoping to work more with hospitals and kids and bring in clean music for them and let them write and record music as Denim does, using the mobile studio she has.”

One of Denim’s favorite songs that she’s written is titled, Feeling Myself. In it, she shares that no matter what she’s going through, and what others might think of her, “I’m feeling myself, and I feel confident and I feel good about me.” 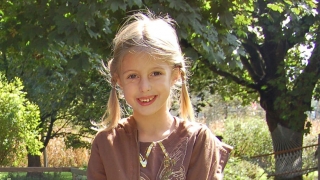 Emma was diagnosed with kidney stones at age 6. Now 17, she’s focused on preventing stone recurrence as she prepares for college.