Over the last year, 12-year-old Nick has taken ownership of his health. More and more, he is sharing with friends and even strangers about the kidney disorder he’s had since age 3. Nick’s condition frequently causes his body to swell from head to toe, sometimes adding as much as 25 pounds of fluid to his tender frame with little warning. 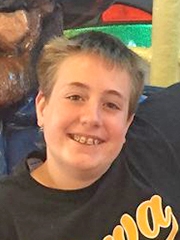 Joe and Bridget were both listening in during a recent telephone interview as their son, Nick, spoke about his challenges with frequently relapsing nephrotic syndrome (FRNS). They couldn’t be prouder of him, or more grateful to the team of doctors at Children’s Hospital of Philadelphia (CHOP) who helped to facilitate his progress this far. Nick, a sushi lover and an Eagles fan who enjoys experimenting in the kitchen with recipes he creates and baking special birthday cakes decorated with unicorns and rainbows, is endearing, thoughtful and funny.

“He is the strongest person I ever met,” Joe says of his youngest of three children. “Many times, he gives us the strength. If he can do it, we can do it … Along the way, he always makes us laugh.”

“He is the most resilient, most resourceful person I ever met,” adds Bridget.

It all started on Nov. 9, 2009, three months after Nick’s third birthday. It’s a moment embedded in Bridget’s memory. When her baby — who had a cast on his left arm due to a hyperextended elbow — woke up that morning, his body was “extremely puffy.” Among her concerns was that the cast would cut off his circulation.

Bridget took her son to the pediatrician who said Nick appeared to be having an allergic reaction, or possibly had swine flu. Nick was immediately taken to nearby Chester County Hospital where he was placed in isolation.

Luckily, says Bridget, a physician from CHOP’s Division of Nephrology was on staff and knew what was wrong with Nick the second she looked at him. She diagnosed Nick with nephrotic syndrome. Within hours, Nick and Bridget were in an ambulance on their way to CHOP, where Nick spent the next 10 days on steroids to get the swelling down.

Over the years, Nick has been on many different medications, from steroids to a 12-week regimen of low-dose chemotherapy administered at home. Since age 4, he has participated in studies looking into frequently relapsing nephrotic syndrome (FRNS), including its cause.

Since he was diagnosed, Nick has experienced at least two or three relapses a year. Even Nick admits that frustration, and sometimes anger he can’t even explain, can get the best of him.

“I can be Grumpy Nick or non-Grumpy Nick,” he says of his two self-proclaimed monikers. Whom you meet solely depends on the ups and downs of his life with frequently relapsing nephrotic syndrome.

Symptoms of FRNS vary among patients, but can include swelling, weight gain, vomiting, decreased appetite, high cholesterol levels in the blood and blood pressure issues. Left untreated, the condition can cause serious infection, blood clots and kidney damage. FRNS is officially defined as steroid-sensitive nephrotic syndrome with two or more relapses within six months, or four or more relapses with a year. Although the condition gets better with steroids, it keeps coming back in a short space of time. Given his body fluctuations, Bridget describes Nick’s wardrobe in three stages of puffiness: Remission, one size up, and two to three sizes up to comfortably accommodate his frame during a full-blown relapse.

Dealing with the physical and emotional impact of relapses

Nick sailed from January to October of 2018 without a single issue. But when a relapse hit him in October, and again in November, it hit hard.

The first sign is in his urine. His urine is tested every three to four days when he is in remission and daily when there is a flare-up. But it’s the swelling that is the telltale sign.

“I can tell from my body,” says Nick. “When I sit up straight, I feel like my back is folding. I just feel heavier.” No matter how hard he tries to purposely walk lightly on the hard wood floors throughout his Chester County home, Nick says, “I feel like 1,000 pounds.”

Bridget says it was through CHOP that Nick was referred to a private psychologist to help him deal with issues, including anger management. During their sessions, they talk about specific instances that might crop up — like when he relapses and other children tease him about looking different.

As he’s grown older, it has become harder for Nick to understand his own feelings, let alone articulate them. Now, he is learning to implement coping skills and self-discipline.

He has told most of his classmates about his condition. It’s their friends or students in the school, who are still unaware, who sometimes make hurtful remarks.

“Some people don’t even notice, some do,” says Nick. “They don’t all understand, but I think most try.”

In talking more about his condition, Nick has found that he is not alone. When he shared his medical history, a classmate told him about his battle with leukemia. The pair became fast friends, and his classmate is now cancer-free. Through church, Nick met a man who had the same kidney condition when he was young. He, too, had three sets of clothing.

Nick continually amazes his parents as he works on skills he is learning in therapy to cope with his condition. He has found that writing poetry and songs help when he is feeling down, among other outlets like karate and playing the saxophone. Following a recent relapse, Nick was frustrated because he had to stay in the hospital three days longer than planned, so he penned a short poem. The verse begins:

Joe and Bridget are very happy with the care Nick has received from everyone at CHOP, especially Nick’s physician, Madhura Pradhan, MD, MBBS. “I think CHOP is the most wonderful place on the planet,” says Bridget.

In recent years, Nick has taken it upon himself to give back to his care team. Instead of birthday presents, he’s asked family and friends to make a donation to CHOP.