During a routine well visit, Cullen Mitchell’s pediatrician noticed a very large, light brown mark on his back. He called it a café au lait spot, a type of birthmark that can be normal. 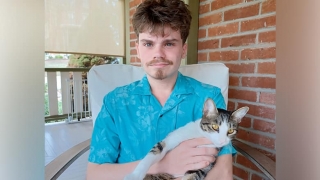 Still, the doctor recommended that Cullen’s mother, Kelly, make an appointment with the Dermatology Section at The Children’s Hospital of Philadelphia.

“We felt anxious in the weeks leading up to Cullen’s appointment, but we never expected the news we received,” says Kelly.

At that appointment, 1-year-old Cullen was diagnosed with neurofibromatosis type 1 (NF1). The genetic disease is often characterized by skin differences like café au lait spots. Cullen’s body, when viewed under a black light, was covered in them.

Children with neurofibromatosis type 1 are at higher risk of developing tumors throughout the body, but especially in the nervous system. These tumors are commonly non-cancerous (benign), but can become cancerous (malignant). Even the benign tumors, though, can grow large enough to press on nerves, causing pain and weakness. They may even become life-threatening if they press on vital organs, and often require treatment.

The condition is also characterized by skeletal abnormalities, like scoliosis. Additionally, more than 50 percent of children with NF1 have learning disabilities that persist into adulthood, and many have behavioral differences and poor social skills, too.

“That first day, we were given some patient education materials and told what NF1 could look like for our sweet Cullen,” says Kelly. “We definitely left feeling overwhelmed and scared, even though we knew we were in good hands at CHOP.”

NF1 doesn’t affect all children the same way. Some may have very few symptoms or never develop tumors. Others will constantly battle cancerous and non-cancerous tumors, requiring multiple surgeries and other treatments. And as children age, there’s always the concern of managing complex social, behavioral and learning problems.

“Because there’s no way to know how the disease will manifest in each child, learning about the diagnosis can understandably cause a lot of anxiety for parents,” says Michael Fisher, MD, Director of the Neurofibromatosis Program at CHOP.

The program is one of the country’s oldest for the management of and research into neurofibromatosis. It brings together the expertise of leading physicians and researchers from various specialties — including genetics, oncology, ophthalmology, orthopedics, otolaryngology, neurology, and neurosurgery — who may be called on to care for patients with NF.

Cullen was quickly referred to the Neurofibromatosis Program. There, Kelly and her husband, Ken, began to learn even more about NF1 and how to best manage Cullen’s condition.

Over the years since Cullen’s diagnosis, he has developed a few plexiform neurofibromas (benign tumors that grow on nerves) in his neck and on his spine, as well as an optic pathway glioma, a tumor of the visual system that may affect vision. So far, these tumors haven’t required treatment.

Over the years, Cullen struggled to reach some developmental milestones. He has needed speech, occupational and physical therapy. He’s had help from CHOP’s Sleep Clinic and the Pediatric Feeding and Swallowing Center.

“We still consider ourselves lucky, even with the challenges Cullen has faced, and the countless tests and appointments we need to keep up with,” says Kelly, revealing her optimism about her son’s condition.

Having recently celebrated his 20th birthday, Cullen enjoys reading, watching movies, and playing video games. He looks forward to learning how to drive and is considering going to tech school or a community college. His advice for kids with NF1? “When you're feeling scared during medical tests or getting blood drawn, think of something positive to distract yourself,” he says. “Find a particular treat or reward — mine was M&M chocolate chip cookies — and plan to have that after a CHOP visit as a reward so you have something to look forward to.” He recommends attending Camp New Friends through Brainy Camps, which is specifically for kids with NF. Overall, when it comes to his NF1, he has good news to report: “I would say it definitely becomes less bothersome as you get older.”