Nolan’s experience with nephrotic syndrome was overwhelming for his parents at first. But with support from their care team at CHOP, they have been able to maximize his quality of life. 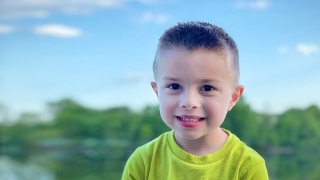 As a baby, Nolan was super active, always walking and running. So, when he was 3 years old and started complaining about his legs hurting, his parents were concerned.

Their concern bubbled over when Nolan started waking up every morning with his eyelids swollen shut and a painfully swollen stomach. They took him to the pediatrician, who tested a sample of Nolan’s urine. When the results of the test came back, the pediatrician told the family they needed to see specialists in the Division of Nephrology at Children’s Hospital of Philadelphia (CHOP) as soon as possible.

“We were so scared because we had assumed it was allergies or something minor,” says Nolan’s mom, Stephanie. “As soon as we met with the team at CHOP, we felt relieved at how great they were and how they assured us they would do everything possible to help Nolan.”

Nolan was diagnosed with new onset nephrotic syndrome and prescribed prednisone, which helped lower the amount of protein in his urine. But every time his care team tried to wean him off the steroid, he would relapse. Nolan’s health finally began to improve when Nolan started taking a different immunosuppressant medication.

Now at age 5, Nolan has gone almost a year without a relapse.

“He is back to being the Nolan we knew,” says Stephanie. “He plays on a soccer team and loves being outside and riding his bike. We are so happy with the care we have received at Children’s Hospital.”

The family wrote a book about the whole experience. Titled “You’ve Got to Be Kidneying Me,” it tells the story of a brave boy who is diagnosed with a rare disease and conquers it like a superhero.

“It doesn’t have to be the end of the world,” says Stephanie of nephrotic syndrome. “We found the best treatment to help him have the best quality of life despite the circumstances. We wrote the book to help sick kids like Nolan who are feeling sad or discouraged realize they are not alone, and there are so many kids like them.”