As lifelong Philadelphia residents, Gus and Jill DiStefano were familiar with Children’s Hospital of Philadelphia. But in March 2015, they joined many others as a family who needed CHOP.

Jill’s second pregnancy was uneventful. On Jan. 26, 2015, daughter Olivia was born. She was declared healthy and sent home after two days in the hospital. With Olivia and her older son at home, Jill and Gus thought their family was perfect. 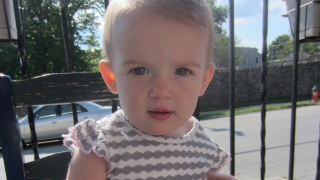 When Olivia was about 7 weeks old, she spiked a high fever. Given her temperature and young age, the DiStefanos didn’t want to take any chances. They took Olivia to the Emergency Department at CHOP. She was diagnosed with a viral respiratory illness, and discharged.

When Olivia’s fevers continued to persist day-after-day, her parents returned to the ED. This time, Olivia was admitted to the hospital. Her symptoms — fevers, enlarged spleen and decreased appetite — pointed to a viral illness.

After seven days in the hospital, Olivia’s fevers decreased in frequency and strength. She appeared to be on the road to recovery and was sent home. Still scared but hopeful, Olivia’s parents continued to watch her symptoms closely.

The ED team immediately recognized the severity of Olivia’s condition and quickly moved her to the resuscitation room. Within seconds, Olivia was surrounded by dozens of medical professionals all working together to assess her condition.

Olivia was admitted to the Hospital. Doctors assessed her condition and ran numerous tests. Again, her symptoms pointed to an infection as a cause.

“What we didn't know at the time was that April 13, 2015, would be the beginning of a four-month hospital stay and Olivia would be a medical mystery, a zebra,” Jill says.

The family spent several weeks watching Olivia's condition deteriorate with no diagnosis in sight. Olivia underwent test after test, some requiring anesthesia and breathing tubes. Her high-grade fevers continued, and were often accompanied by vomiting. Jill and Gus were sick with worry.

“Consult after consult evaluated Olivia trying to determine what was making her so ill,” Jill says. “I think every specialty that ended with ‘ology’ was in her room.”

During this time, doctors worked to rule out possible causes including leukemia and hemophagocytic lymphohistiocytosis (HLH), two life-threatening conditions.

Gus and Jill were petrified. For the first time, they imagined losing their daughter. The thought was more than they could bear.

The days that followed were filled with more tests; more questions than answers. The couple was struggling — trying their best to cope and stay strong for their children.

“We received much support, care and empathy from Olivia's nurses,” Jill says. “As a nurse myself, I don't think I ever truly appreciated when a patient would thank me for taking the time with them, or answering their questions, or just simply being there."

As Olivia’s condition worsened, she was transferred to the Pediatric Intensive Care Unit (PICU). It was here the DiStefanos met Edward M. Behrens, MD, Chief of the Division of Rheumatology.

“Dr. Behrens told us that after doing some digging, feverishly trying to figure out Olivia, he and his team came upon an article about a baby and the baby's father who had symptoms just like Olivia’s,” Jill says.

In that family’s case, the diagnosis was an autoinflammatory disease, caused by a genetic mutation of the NLRC-4 protein. 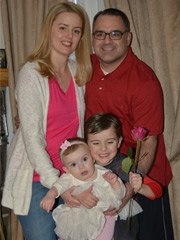 Dr. Behrens explained that if Olivia had the same mutation, it would mean her immune system was, in effect, permanently turned on and didn’t know how to turn itself off. Basically, her own immune system was attacking her healthy cells, making her sicker.

He then mentioned the word the DiStefanos desperately needed to hear: treatment.

Olivia was started on medication, which improved her symptoms somewhat, but also came with side effects. Her appearance changed, her blood pressure rose, and she developed antibodies against one of her medications, causing an almost anaphylactic reaction.

Some days Olivia showed improvement, while on other days the fever returned despite the medications.

Dr. Behrens continued investigating new medication options. He believed a recently approved medication to treat inflammatory bowel disease in adults may help Olivia, and lobbied CHOP leaders to approve its use for Olivia.

“Everyone recognized what was at stake and did what had to be done to help our little girl,” Jill says.

Olivia made some improvement, but not what was desired.

Dr. Behrens told the family about another medication for adult Still Disease in a Phase II trial in Europe. He and his team believed Olivia's disease was worsened by overproduction of two specific interleukins — IL-1 and IL-18.

“Dr. Behrens spoke to the drug company in Switzerland and appealed to the FDA for approval for compassionate use,” Jill says. “We were seeing precision medicine at its finest.”

The medication was shipped to CHOP, and after 48 hours of waiting, Olivia received her first dose. It was obvious almost immediately that the drug was working. Olivia was transferred out of the PICU, and hadn’t had any fevers.

“After receiving just two doses of the medication, Dr. Behrens came with the great news,” Jill says. “Olivia’s IL-18 level was back and it was zero — ZERO! To hear the news was overwhelming.”

Olivia remained in the Hospital for several weeks as she continued to improve with the medication. In August, she was discharged home.

The DiStefanos know Olivia being home isn't the end of their medical journey, but are committed to taking it one day at a time.

“My husband and I are continuing to spread awareness of Olivia's condition and the lifesaving treatment she received at CHOP,” Jill says.

“We want to give back — to enable other families to be able to experience the care, the compassion and the hope that we did.”

Philanthropic gifts are vital to making breakthrough stories like Olivia's a reality for sick children. With your help, we can provide innovative care, pioneering treatments and lifesaving cures to children … tomorrow and for years to come.