Six years ago, Lindsay Gordon was in middle school and confined to a back brace nearly all day, every day to treat extreme scoliosis. Today, she’s a sophomore at the University of Pennsylvania with a successful clothing line that has generated thousands of dollars in support of scoliosis research. 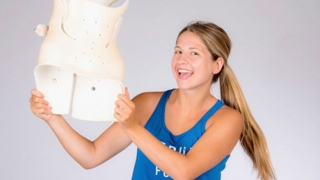 Lindsay’s journey from patient to philanthropist began when she was 12. During a routine checkup, her physician noticed a curve in her spine. An X-ray confirmed she had scoliosis. Her spine bent at the top in one direction and the bottom in another, creating an S-shaped curve.

She was referred to the Spine Program at Children’s Hospital of Philadelphia (CHOP), one of the best and most innovative programs of its kind in the world. The program is staffed with six board-certified pediatric orthopaedic surgeons and offers a full range of state-of-the-art treatments — both surgical and nonsurgical. Care is focused on ensuring each child gets the most effective, but least invasive, treatment possible.

The curves in Lindsay’s spine were extreme. But because her condition had been caught early, there was a chance bracing and advanced physical therapy could stop the scoliosis from progressing. And, more importantly, keep Lindsay out of surgery.

A marathon, not a sprint. That’s how John Flynn, MD, Chief of the Division of Orthopaedics at Children’s Hospital of Philadelphia, described non-operative treatment of scoliosis to Lindsay and her family. It would involve wearing a specially designed back brace for 20 hours a day, seven days a week, until her bones stopped growing to prevent the curve from getting worse. It’s no easy feat, especially for an active adolescent, but the alternative is a surgery that involves metal rods being implanted into the back for life.

It was difficult to adjust to life in the brace, a rigid plastic shell cinched tightly around Lindsay’s torso that went from her armpits to below her hips. But with support from her family and friends, Lindsay eventually came up with a routine that worked. A three-season athlete — playing soccer, basketball and lacrosse — she would take the brace off every day after school for sports practice, then go home and eat dinner. Before putting the brace back on, she’d do planks and other exercises to strengthen her core and back.

Making a difference for other adolescents with scoliosis 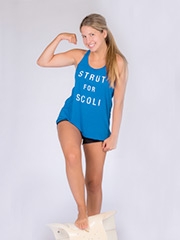 After four years, Dr. Flynn told Lindsay she had won the marathon! Her bones had finished growing and her curves hadn’t gotten worse; she was finally able to say goodbye to her brace. With her scoliosis treatment over, Lindsay focused her energy on trying to make a difference for other children with the condition.

“I was always aware that I had an extra obligation that my peers did not,” says Lindsay. “When I was wearing the brace, I had this other burden and stress constantly. I knew that if I could overcome that, I could take on anything life threw at me. I wanted to inspire teens and spread awareness for the cause that’s so close to my heart.”

She combined her love for fashion, enthusiasm for service, and interest in business to create a charity “athleisure” clothing line, called Strut for Scoliosis. She designed shirts and leggings that feature an image of a crooked spine, and sold them on a website she built — strutforscoli.com.

Lindsay continues to spread awareness and raise funds through Strut for Scoliosis trunk shows at Penn.

“Through my brand, I’ve met a lot of girls who say they didn’t know anyone who had scoliosis,” says Lindsay. “There’s not that much awareness about the disease, which can make you feel alone when you get the diagnosis.”

Advice for kids learning to adjust to a back brace

Lindsay offers the following tips for kids who are struggling to adjust to life in a back brace: