He did so well on his high school tests he was valedictorian of Raritan High School in Hazlet, N.J. He scored so high on his SAT he was awarded an academic scholarship in mechanical engineering from the College of New Jersey.

Then, Chris got sick after high school graduation in 2013. He developed an unusual combination of stomach symptoms, with severe abdominal pain but he was still hungry. The stomach pain he had increased after eating. To decrease the discomfort, Chris ate less and experienced rapid weight loss. Then came different types of tests. He was tested for Lyme disease, celiac disease, Crohn’s disease and mononucleosis. He underwent a battery of tests including blood tests, CT scans, endoscopy and colonoscopy — but no explanation was found.

With normal test results, Chris kept on the path toward his goal of becoming an engineer. He moved into his college dorm room and started classes. But he felt anything but normal. He couldn’t eat, so he was always exhausted. He dragged himself to every class, trying to keep up. His joints began to ache, and his heart rate and blood pressure kept rising.

“One doctor told us, ‘He’s clearly wasting away, but I don’t know why,’” remembers Victoria Stabile, Chris’ mother. Despite the severity of his symptoms, Chris couldn’t be admitted to the hospital because the family’s insurance wouldn’t authorize an inpatient evaluation without a diagnosis. Ultimately, Chris was forced to withdraw from college. “It was the stomach issue,” Chris says. “I was always uncomfortable: If I stood up, I got weak. If I sat, it hurt my back and neck. If I lay down, I couldn’t sleep. If I ate, I had pain. I was miserable.”

Eventually, an endocrinologist found a lump on Chris’ neck, which led to more tests. A chest and neck X-ray were normal; however, a neck ultrasound showed a markedly enlarged thyroid with bright spots throughout, a sign highly suggestive of thyroid cancer. A fine needle aspiration biopsy confirmed papillary thyroid cancer (PTC). The family got the news on Halloween.

“After all that, they told us they couldn’t do surgery while his heart rate and blood pressure were so high, and they didn’t know why they were elevated. And he still had the awful stomach pain. Not all his symptoms were from the thyroid cancer,” Victoria says. “Our pediatrician told us to get Chris into a hospital with a great diagnostic practice. I wanted to go to CHOP.”

On Nov. 6, with Chris in pain in the back seat, the family drove to The Children’s Hospital of Philadelphia, where he would be evaluated at the Pediatric Thyroid Center, and where a plethora of specialists across many disciplines would be available to diagnose and treat his other problems. When Andrew J. Bauer, MD, director of the center, got one look at Chris — who had gone from 155 to 117 pounds — he admitted him that day for malnutrition.

After bouncing from specialist to specialist for three months, Chris says he thought to himself, “Finally, a doctor is on my side.”

“We consulted with GI for nutritional rehab in order to get him ready for what we knew would be extensive thyroid and neck surgery,” Dr. Bauer says. “We don’t know why Chris experienced such a dramatic weight loss. It is not a typical feature of thyroid cancer. To make things more complicated, Chris had lost so much weight that he developed secondary superior mesenteric artery (SMA) syndrome.”

SMA syndrome is a rare and life-threatening condition in which the superior mesenteric artery (which supplies blood to the intestines and pancreas) lies directly on the duodenum (the first part of the small intestine as it comes out of the stomach). In this position, it acts like a clamp, obstructing food from passing through. Usually the SMA is lifted off the duodenum by a layer of fat, but Chris’s weight loss eliminated that fat. It was also compressing his renal artery, contributing to his elevated heart rate and blood pressure.

“Every day, a bunch of doctors were coming to see him,” Victoria says. “There was GI, renal, ENT and endocrinology, of course.”

Because of the SMA syndrome, Chris needed a nasogastric (NG) feeding tube placed to give him more calories than he could take in by eating. Finally, on Nov. 20, he was strong enough for thyroid surgery. Surgeon Ken Kazahaya, MD, MBA, FACS, spent 9½ hours removing his thyroid gland and diseased lymph nodes on the right side. Kazahaya also placed a nasojejunal (NJ) tube so nutrition could be pumped directly into his intestines, bypassing the SMA obstruction. There was still more work to do. After 12 days of recovery, Chris got to go home for a week before Dr. Kazahaya operated again on Dec. 10. Nodules were removed from the left side of Chris’ neck. After five days of recovery, he was discharged, still with the NJ tube.

“The tube was miserable,” Chris says. “Having it in for more than a month was NOT fun.”

When he got a stomach bug in January and retching dislodged the tube from his intestines, it came out and stayed out. By then he had gained 10 pounds and was able to eat on his own without pain. All of Chris’ complications — SMA syndrome, insomnia, elevated heart rate and high blood pressure — went away.

“His presentation was highly unusual for PTC,” says Dr. Bauer. “His symptoms appear to have been associated with this thyroid cancer and they resolved with treatment, but I’ve never seen or read about a similar case. Once we stabilized his malnutrition and his SMA syndrome, I told the family, ‘Let’s treat his thyroid cancer and see what happens. We may not have all the answers right now, but we know what Chris has and what we need to do to treat it.’ 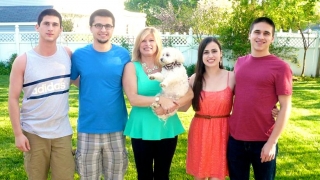 “With the appropriate medical and surgical care, Chris’s perseverance and his family’s and friends’ support, four months after treatment Chris had gained back 30 of the 35 pounds he had lost. He was sleeping, eating and his mood was improved. When his mom texted me to ask if it was OK for Chris to go snowboarding, I knew Chris was back.”

Because a body scan in April showed three small spots of persistent cancer, Chris received a treatment dose of radioactive iodine. His post-treatment scan confirmed he had no other distant metastasis, and Chris has now entered the surveillance phase to follow how effective the initial treatment was in eradicating the cancer.

During surveillance, Chris will have Thyroid Center visits every three months for physical exams and blood work to look for the tumor marker level. Six to 12 months after the initial treatment, he will have another neck ultrasound. Six months later, he will likely have a repeat diagnostic whole body scan to check for cancer. “It becomes your new normal,” Victoria says.

For Chris, his new normal began in the fall, when he returned to the College of New Jersey. He has to start over. He had As in all his classes before he had to leave, so he feels he has a leg up as a second-time-around freshman.

Philanthropic gifts to the Pediatric Thyroid Center are vital to making breakthrough stories like Christopher's a reality. With your support, we can provide innovative care, pioneering treatments and lifesaving cures to more children today, tomorrow, and for years to come.