When Ayleen was 4 years old, her parents thought her chubby double chin was probably just baby fat, but they asked her pediatrician to be sure everything was OK. “The doctor looked at her for about one second and said it was nothing to worry about,” her father, Fuad, recalls. 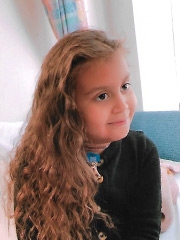 About a year later, Fuad saw a health segment on TV that prompted him to follow up and have Ayleens’s chubby chin examined. Ayleen had an ultrasound near their Hackensack, NJ, home in January 2018. Her parents were told to come back later that year. By the time of their August 2018 follow-up appointment, the chubby chin was more of a lump on one side of her neck. The specialist ordered another ultrasound, but wasn’t concerned and told them to follow up in January 2019.

“It was the ultrasound technician who was very helpful,” Fuad says. “She knew something wasn’t right. She compared the prior ultrasound to the new one and got a radiologist. He told me: ‘Go to Children’s Hospital of Philadelphia. Go now. There’s a tumor nearly closing her airway.’ I drove straight to Philadelphia.”

‘One of the best thyroid doctors anywhere’

“We never saw a thyroid doctor — until we got to Children’s Hospital of Philadelphia,” Fuad says. “Then we saw Dr. Andrew Bauer, one of the best thyroid doctors for children anywhere.”

Dr. Bauer, Director of the Pediatric Thyroid Center at CHOP, diagnosed Ayleen with papillary thyroid carcinoma. To remove the tumor, surgeon Ken Kazahaya, MD, MBA, removed her thyroid gland (total thyroidectomy) and nearby lymph nodes that had metastatic thyroid cancer in a delicate 18-hour surgery. It was the longest thyroid surgery in the center’s history.

“It was a long, painful wait,” Fuad says. “They kept coming out and saying she was fine; it was just complicated. She’s a tough cookie. She came through it well.”

A week later, on Ayleen’s seventh birthday, Sept. 7, they were discharged and went home.

Even though the surgery was a success, Dr. Bauer advised Ayleen undergo radioactive iodine (RAI) therapy to destroy any remaining thyroid cancer cells. The radioactive isotope I-131 is taken up by thyroid tissue, both normal and those with papillary thyroid cancer, but the isotope is not absorbed by other cells in the body.

In late October, Ayleen took her dose of radioactive iodine. For the next five days, Ayleen, like all patients who have the treatment, was advised to stay at least 4 feet from other people, especially pregnant women and small children, for the week following the intake of the radioactive iodine dose.

So, the two of them stayed in Ayleen’s room, protecting the rest of the family. “I brought a little griddle in there and cooked her lamb chops — her favorite — five days in a row,” Fuad says. “We talked. I read to her. We watched a little TV. We played games. I had her drink a lot because the doctor wanted her to clear the radiation out of her body as soon as possible.”

A radioiodine whole-body scan showed that while her neck was clear of cancer, the thyroid cancer had spread to her lungs.

Ayleen is currently being monitored by the Thyroid Center, with blood tests every three months to track thyroglobulin (Tg), a protein produced by both normal and papillary thyroid cancer cells, and with neck ultrasounds and CT scans of her lungs every six months to determine if and when additional treatment would be beneficial. Once all the thyroid cancer cells are destroyed, her Tg level should be undetectable and her imaging should be normal, with no evidence of thyroid cancer in her neck or lungs.

While more than 98% of pediatric patients with papillary thyroid cancer survive, up to one-third of patients can have cancer that is not growing but that cannot be completely destroyed. So, while survival is high, thyroid cancer can be a chronic disease that impacts the patient and family for many years, even decades.

“She’s very brave about the blood tests,” Fuad says. “She helps the nurse find the vein and never cries. I always say she’s a tough cookie.”

Ayleen has finished first grade and is a typical 7-year-old who enjoys swimming and playing games on her dad’s phone. “She’s back to running around like crazy,” Fuad says.

Drawing is another favorite pastime. “She draws different clothes and tells me she wants to be a clothes designer,” her father says. “She also draws pictures of me — when I’m happy and when I’m sad.”

Fuad still carries around guilt that he didn’t bring Ayleen to CHOP sooner. “I will always wonder if we could have had a diagnosis years earlier, when we first thought something wasn’t right with her neck,” Fuad says. “I’m still angry it was missed. I feel like I failed her.”

But those feelings are surpassed by the gratitude the family feels toward Children’s Hospital, and especially the Thyroid Center.

“I think they are the most caring people in the world,” he says. “The nurses, both Lindsay (Sisko, BSN) and Courtney (Kivel, CRNP) are five stars! If I could give them 10 stars, more than 10 stars, I would. Through everything, they have been so wonderful with Ayleen and with me.

“Dr. Kazahaya is the nicest doctor I’ve ever seen, and he’s so good with kids. Dr. Bauer always listens to me very carefully. He wants to know what I see, what I think. That’s important and I appreciate it so much.

“We are so glad we came to Philadelphia and to CHOP. We know we are in expert hands.”