Twelve-year-old Addison is driven to succeed. Her current goals include: getting into an Ivy League college, perfecting her back handspring and eating one peanut M&M without incident. Chances are high she’ll meet all three. 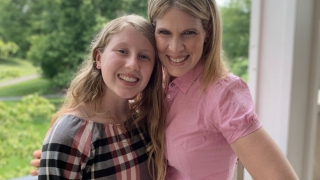 For years, a tiny amount of peanut protein would send Addison into anaphylaxis. She would break out into itchy, swollen hives, become congested and vomit. Now, after completing a three-year clinical trial through the Food Allergy Center at Children’s Hospital of Philadelphia (CHOP), Addison is showing signs of improvement. She tolerated the equivalent of 15 peanuts at her last food challenge.

The clinical trial “has drastically improved her quality of life," says Addison’s mom, Lisa. "She has much less fear of accidentally ingesting peanuts and is more comfortable trying unknown foods, which has opened up what she can experience.”

Addison was 14 months old when she nibbled a corner of her father’s peanut butter and jelly sandwich and immediately broke out in hives. Her father, Frank, rushed her to the pediatrician while Lisa drove home from work to meet them there.

“Her little face had completely blown up in hives,” Lisa remembers. “That hour driving home from North Jersey to where we live near Princeton was absolutely terrible. I don’t even know how I did it.”

The pediatrician treated Addison’s symptoms and diagnosed her with a food allergy. Lisa was so unnerved by the experience, that she quit her job and found a new one closer to home. She also set out to find the best pediatric allergist around. Her research brought her to Jonathan Spergel, MD, PhD, Chief of the Allergy Program at CHOP.

Dr. Spergel diagnosed Addison with an IgE-mediated food allergy to peanuts. Under his guidance, parents Lisa and Frank followed an allergy management plan that centered on avoiding any foods that contain peanuts.

As Addison grew older, her parents supplied her teachers with a stash of Oreos for classroom snacks and gave Addison a hot-pink single-serving cupcake carrier to hold her own treat for birthday parties and school celebrations.

Her parents soon realized that keeping their daughter safe often meant cutting her off from potential friends at lunch. Addison’s elementary school grouped students with food allergies together, assigning them to a designated classroom and seating them at the nut-free table in the lunchroom.

With Dr. Spergel’s encouragement, they signed a waiver allowing Addison to sit with her friends at lunch. “Dr. Spergel gave me that guidance and emotional support to sign that waiver,” Lisa says. “He was a godsend.”

Hope in a clinical trial 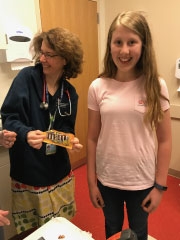 When Addison was first diagnosed, her family hoped she would grow out of her allergy. But that appeared less likely as time went on. Addison was 8 years old when her parents agreed to enroll their daughter in a clinical trial for a potential allergy desensitization treatment at CHOP.

Terri F. Brown-Whitehorn, MD, oversaw the trial, in which participants wore skin patches infused with peanut protein each day for three years. The goal of the study was to see if the patch would change Addison's immune system so she could tolerate more peanut exposure or an accidental ingestion. Addison and her family worked closely with CHOP's research team including Megan O. Lewis, MSN,  CRNP, program manager for Allergy Research, and Courtney Rooney, BSN, RN, clinical research nurse coordinator for the Food Allergy Center.

Addison participated in a Food Challenge once a year during the clinical trial in which she would ingest a tiny amount of peanut paste. After the first year, she had an anaphylactic reaction to half a peanut. By the end of the third year, Addison tolerated eating the equivalent of 15 peanuts.

“The stats were staggering. What she could ingest had grown exponentially. I was so proud of that.”

Since the final patch came off in May 2019, Addison has been keeping up her desensitization routine by eating part of a peanut M&M each day.

The chocolate and candy-coating mask the taste of the peanut, which Addison finds unpleasant. She started by eating a quarter of one M&M and will gradually work her way up to one candy per day.

Addison was up to half an M&M when she suffered a setback. Despite the warnings to keep her body temperature level by avoiding activity and warm weather for two hours before and after eating the M&M, Addison and her grandmother went for a late afternoon walk on the beach one day.

When Addison returned congested and with an itchy throat, Lisa emailed Dr. Brown-Whitehorn, who called her almost immediately with instructions to give Addison a dose of Benadryl and to cool her down with a cold compress. The next morning, Addison felt fine, but became anxious about eating her daily M&M. She would fret before taking it and worry afterward that she would have an allergic reaction. Most of all, she was afraid that three years of wearing the patch was all for nothing.

“We told her to not give up hope, this was a blip and we’re going to get over it,” Lisa says. Under a doctor's supervision, the family scaled back to giving Addison only  a quarter of an M&M per day and are now building their way back up. 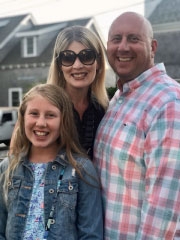 Addison’s participation in the research trial may be over, but her excellent care in CHOP's Food Allergy Center continues – as her willingness to support other children with food allergies. Addison was so moved by her experience at CHOP that she decided to donate part of her research study stipend back to the program. Her mother’s employer brought the total up with a 2:1 match. Addison and her family have also created an online donation page, where friends and relatives can make donations to CHOP's Food Allergy Program instead of buying presents for Addison’s 13th birthday.

"Addison told us that she wanted to help other kids with food allergies and help find a cure,” Lisa says. “We are incredibly proud of her for coming to those decisions on her own.”

While Lisa and Frank are proud of their daughter, they’re not surprised by her eagerness to help. Addison had to learn early on to take responsibility for her own well-being and that concern has extended to others. She’s a pyramid “base” on an award-winning competitive cheerleading team, literally holding up her teammates. Her sixth-grade pre-algebra teacher wrote on her report card that he’d be hard-pressed to find a child more conscientious than Addison. And she uses a white board system and inspirational quotes to keep herself organized and motivated at home.

Addison just started seventh-grade, but already knows the topic of her eighth-grade speech: the peanut allergy clinical trial at CHOP.

“She already asked the clinicians at CHOP for some research material,” her mother laughs. 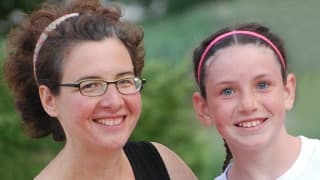 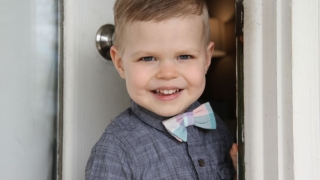 In just 18 months, Isaiah went from being able to eat five foods to 35, thanks to care and treatment at CHOP's Food Allergy Center.