On a beautiful May evening, Chase was playing a casual game of soccer with neighborhood friends. Wendi, his mother, was talking with some other parents when she heard one of the boys yell, “Chase, get up!” 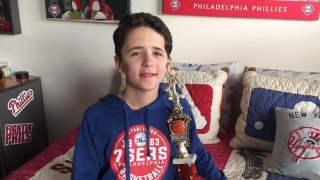 “I turned around to see Chase lying on the grass,” she remembers. “I walked over to him and saw that his eyes were wide open. He wasn’t moving. He was staring at me, drooling out of the right side of his mouth, and completely unresponsive.” Wendi called 911, and the operator instructed her to lay him on his left side until the ambulance arrived. She did, and he immediately vomited.

At a local emergency room near their home in Marlton, NJ, doctors first thought Chase had suffered a seizure. As the hours went by and he remained unresponsive and vomiting, Wendi pressed the medical team to examine him more closely. She thought something seemed strange about his face. When her husband Jordan arrived, he immediately noticed that Chase was not moving his right side.

Chase was transferred to Children’s Hospital of Philadelphia (CHOP), where an MRI showed that he had suffered a massive stroke — a left middle cerebral artery stroke. Chase was admitted to CHOP’s Pediatric Intensive Care Unit (PICU), where Daniel Licht, MD, a Pediatric Neurologist and Director of CHOP’s Neurovascular Imaging Lab, oversaw his care.

Recognize the signs and symptoms of pediatric stroke so you can act quickly. Early recognition and treatment after a stroke is critical to long-term outcomes.

In the first days after the stroke, Chase couldn’t talk. His communication was limited to thumbs up and thumbs down signals with his left hand. On day three, his brain was swelling to a critical point and immediate surgery was performed to relieve pressure on his brain. Neurosurgeons removed a portion of his skull to give the injured brain tissue room to expand.

“We knew we were in good hands,” says Wendi, “but it was hard to wrap our heads around what had happened.” Three days earlier, Chase had been a healthy, active child, playing outside with friends. Now he couldn’t talk or move his right side. “We had no idea if he would walk, talk, lift his head or be able to eat on his own.”

The first encouraging sign came two days after the surgery, when Chase's uncle asked him a question and he answered, “No.” It was the first time he had spoken since the stroke.

Rebuilding with therapy after stroke

Under the guidance and coordination of CHOP’s Pediatric Stroke Program, Chase began physical, occupational and speech therapy while still in the PICU. He still had no use of the right side of his body. He began talking again, but it was only a few words at a time.

After two weeks in the PICU, Chase was stable enough to move to the inpatient Neurology floor, then to the Inpatient Rehabilitation Unit at the Seashore House where he continued his recovery. For three months, he underwent six hours a day of intensive rehabilitation with a team that included physical and occupational therapists, speech-language pathologists, advanced practice nurses, rehab physicians and more.

At the end of August, Chase was released. Three months after suffering his stroke, he walked out of the Hospital on his own.

After his release from the Hospital, Chase resumed the same intensive therapy program at CHOP three days a week. The only difference was that he was able to come home at night. Chase completed this program a week before Halloween, and then went back to school.

Milestones along his stroke recovery

Four years later, Chase continues to rebuild the skills and strength the stroke took from him.

Under the supervision of the Chief of the Division of Physical Medicine and Rehabilitation, Phillip Bryant, DO, Chase undergoes weekly physical, occupational and speech therapy. Last summer, Chase participated in a Hand-Arm Bimanual Intensive Therapy (HABIT) camp at CHOP for two weeks over the summer.

"Camp was fun, but hard at times too," says Chase. "My favorite day was meeting the Temple Owls football players. They were huge!"

He also does personal training with his karate instructor, which helps with strength, coordination, balance and confidence. He's working towards getting his black belt in June.

Another milestone for Chase happened on the three-year anniversary of his stroke, when he competed in many sporting activities at his school’s field day. He summed up his positive attitude to a local television reporter, stating the he still plans to play professional baseball. (Read more about how far Chase has come.)

A speech, and yet another victory 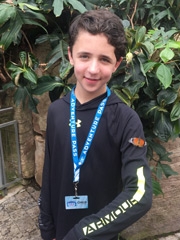 Now 11 years old, Chase is a happy and well-liked sixth-grader who has made honor roll every semester. He has a close circle of friends who have been a supportive influence in his recovery. In fifth grade, he ran for student council, topping off his campaign with a speech to all fourth and fifth graders to make his case. It was a success and his peers chose him to be Student Council Secretary.

To think, just four years earlier, doctors had warned his parents that he may never speak or walk again. He continues to prove them wrong day after day.

Chase is also an avid sports fan. A peak moment for him was meeting another Chase: former Phillies star Chase Utley. And these days, he's enjoying the Philadelphia 76ers' playoff run. "It's a great time to be a Sixers fan — #trusttheprocess!" says Chase.

Before the stroke, Chase played competitive basketball, baseball and soccer for his hometown. While he’s not able to play on competitive teams now, the flexibility in his ankle has improved so much that he cracked his ankle-foot orthosis (AFO) while running. He's now wearing an articulating AFO. He also stays involved as manager of a travel basketball team, a role for which he earned a "Most Valuable Person" trophy.

“They don’t give up at CHOP,” says Wendi. “They keep pushing. If he had been somewhere else, he wouldn’t be as far along in his recovery as he is today.”

Every day, Chase continues to make progress in his recovery. As his parents marvel at his resilience, they do all they can to raise awareness about pediatric stroke and the importance of recognizing the symptoms of stroke in children for an early diagnosis. 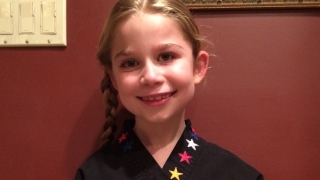 When Bella was a baby, she suffered a serious stroke. Now she’s a busy, active 8-year-old with plans to become an engineer someday.

Stroke Can Happen at Any Age

It’s important to remember that stroke doesn’t just strike adults — children, at any age, are also at risk. Make sure you know how to identify the signs of stroke in children, and spread the word!