“We can help you.” With those words, Ruth Frey, MSN, CPNP, clinical manager of International Patient Services, offered an end to a family’s three-year nightmare.

Paulina and Hussein had found their way to The Children’s Hospital of Philadelphia from Bulgaria, concluding a long and arduous quest to help their son Hadi, 5.

Problems had begun several years earlier, when Hadi, then age 1½, was circumcised by a physician in the family’s native country, using a cauterizing device. During the procedure, much of the child’s penis was burned and injured, and subsequently became severely infected.

The frightened parents first sought help at a hospital in Lebanon, where doctors had to surgically remove most of Hadi’s penis, due to necrosis, or tissue death. The urethra, the tube that carries urine to the opening of the penis, was also almost completely destroyed. The operation resulted in complications of its own, as what was left of the urethra closed up, requiring a second and ultimately unsuccessful surgery.

The urethra remained closed. To enable her son to urinate, Hadi’s mother was forced to dilate or widen the penis opening daily — a difficult and painful task.

The family was deeply frustrated. “I could not believe any doctor anymore,” remembers Hussein.

“This is our son. We needed an answer,” adds Paulina.

Now desperate, the family cast a wider net, looking worldwide for hospitals that might help their child. An Internet search led them to The Children’s Hospital of Philadelphia, where they contacted Frey.

In October 2010, the family traveled from Bulgaria to Philadelphia, and met with urologic surgeon Thomas Kolon, MD, and plastic surgeon, Jesse Taylor, MD. As Hadi underwent a multitude of tests, his parents were impressed by the team’s straightforward manner.

“The doctors here were ready for any question,” says Hussein. “They talked with us a long time.”

The surgeons outlined a plan to correct the damage to Hadi’s penis, explaining every step to the parents. The surgery would be challenging because of the extensive damage Hadi had suffered.

“They told us where we start and where we finish — this is very important for parents,” adds Paulina. 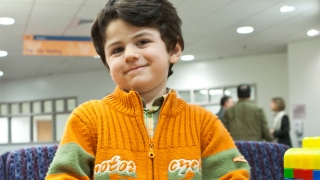 Working together, Drs. Kolon and Taylor performed a complete reconstruction of the penis using native tissue, an approach they preferred to relying on skin grafts because of its more natural-looking result. Dr. Kolon was able to create a new urethra that would enable the child to urinate normally.

This type of collaboration across disciplines is common at Children’s Hospital. As Dr. Taylor says: “The great thing about CHOP is that you have unbelievable talent available in every field.”

CHOP’s Division of Urology is world-renowned for expertise in reconstructive, minimally-invasive and robotic surgeries, performing more than 2,000 procedures a year. The Division of Plastic, Reconstructive and Oral Surgery attracts patients from across the globe and is one of the United States’ largest programs.

Hadi’s doctors are optimistic that he will now grow up with functional anatomy. Within the next year, Hadi will return to CHOP for a second, more minor procedure. His outlook is bright.

The family looks back on their stay at CHOP as a time of hope delivered.

“We searched for three years. We want to help other families,” says Paulina. “When they read our story, they will know CHOP can help them.”

Adds Hussein: “We haven’t the language to say ‘thank you.’”