It was the spring of 2011 when Jessica Nascimento first realized something was wrong with her 11-year-old daughter, Stephany.

“I noticed she was drinking a lot of water and going to the bathroom way too many times,” Jessica says.

The first pediatrician who saw Stephany said nothing was wrong. But a second opinion from a doctor in São Paulo, Brazil, the capital city of the country they call home, was different. The doctor was worried about her frequent urination, but even more concerned that Stephany hadn’t grown in a year. 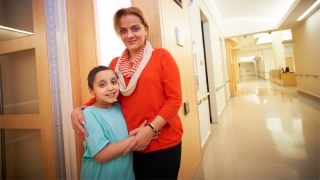 An appointment with an endocrinologist, multiple tests and a painful spinal tap still didn’t reveal the problem. It was an MRI that finally showed the pituitary gland tumor deep inside Stephany’s brain.

Many times these tumors are not cancerous, but a biopsy told the family that Stephany’s case was different: pituitary germinoma.

The cancer had not spread, but treatment needed to begin right away. Stephany started chemotherapy in June 2011.

Jessica and her husband knew the next step after chemotherapy was radiation. It was a frightening thought. They’d learned about the potential long-term side effects that can result from radiation treatment, especially for young children treated for brain cancer.

Radiation therapy can interfere with maturation processes happening when the brain is still developing, impacting the ability to think, put together ideas and perform abstract reasoning.

Jessica wanted an alternative that wouldn’t put so much of Stephany’s healthy brain tissue at risk.

The family discovered the option of proton therapy by doing research online. Proton therapy is an advanced form of radiation that targets radiation more precisely, minimizing damage to nearby healthy tissue.

It’s a treatment that greatly reduces the risk of acute and long-term side effects. But because the technology is so new, proton therapy is not yet available in South America. And worldwide, there are few proton programs designed specifically with pediatric patients in mind.

Jessica’s brother-in-law, a New York pediatric pulmonologist who knew The Children’s Hospital of Philadelphia well, proposed the idea of travelling from Brazil to Philadelphia to get this cutting-edge treatment.

Knowing that proton treatment at CHOP would also offer a partnership with Stephany’s primary oncologist in Brazil, access to CHOP’s top-ranked Cancer Center and the resources international families need, Jessica made the choice to come to Philadelphia.

Traveling so far from their home while Dad stayed behind was daunting. But from the first meeting with doctors, one that happened right in the children’s play area of the Roberts Proton Therapy Center, Jessica’s and Stephany’s experience with CHOP was a positive one.

CHOP’s Global Patient Services (GPS) facilitated the transition of Stephany’s care from Brazil to the U.S. GPS staff took on the responsibilities of case management: coordinating the intake process and medical evaluation, clearing finances, and locating housing and interpreter services.

Arrangements were made to stay at the Ronald McDonald House in West Philadelphia for the six weeks of Stephany’s treatment. Not only would Jessica and Stephany call Philadelphia home for the next month and a half, but so would little sister Sophia, 8.

“In the beginning I was unsure that bringing Sophia would work, but I decided it would be good for her to witness and be a part of Stephany’s treatment,” says Jessica. “It was a positive experience for her to have her sister here.”

The fact that the family speaks Portuguese was of no concern. An interpreter met the Nascimentos soon after their arrival in February 2012. She was with them at every evaluation and treatment to ease communication between the family and clinicians and child life team at CHOP. Jessica says that with the support of the many staff members and clinicians they saw every day, the family felt truly at home.

Between treatments, the Nascimentos had the chance to enjoy Philadelphia, a city Jessica loves and calls “beautiful.” There was always something fun to do when treatment was done for the day, like visiting Philadelphia’s museums.

“These things made our stay much, much easier,” says Jessica.

While the family adjusted to life in Philadelphia, Stephany adjusted to daily proton treatments. At first, it wasn’t easy. Stephany was scared of the mask that kept her head in position. But child life specialist Allison Greb spent time preparing Stephany for treatment and encouraging her to use the coping skills they’d practiced together.

The radiation therapists were patient and understanding while they helped Stephany get through each treatment. Weekly blood draws were also difficult, but medical play helped address many of her fears.

Little sister Sophia had her own job to do. When Stephany was scared, Sophia went into the gantry room to see what proton therapy was all about. Satisfied that it didn’t look so bad, she challenged her big sister: “Why do you cry? Why are you afraid? This is it?” It was the extra push Stephany needed to get over her fears.

For six weeks, Stephany crossed off each treatment on a calendar her mom had given her. After she’d made 30 big Xs through proton days, Stephany reached her last appointment — two days before she turned 12.

Her birthday surprise was something she never expected: the children’s playroom packed with two aunts, an uncle, three cousins, Justin Bieber posters and a birthday cake on her final day at the Roberts Proton Therapy Center. The family and staff were there to cheer Stephany on as she rang a gong signifying the end of treatment.

With cancer treatment behind her, Stephany will go back to being a seventh grade girl who loves science class, reading, artwork, singing and dancing.

“We hope now she will be cured,” says Jessica.

All of Stephany’s follow up care will happen at home in Brazil, but she’ll take a piece of this city home with her: CHOP’s support as her care is transitioned back to her primary oncologist; and a special project she finished during treatment — a scrapbook filled with memories of her life in Philadelphia.