Laila Leclerc was a little more than a year old when she fell onto a pile of building blocks at her home in Saint-Jean-sur-Richelieu, a town near Montreal, Quebec. Her parents, Tomy and Marie, noticed what they thought was a black eye shortly after her fall.

Concerned that Laila’s vision might be affected, they went to see an optometrist. The doctor’s exam revealed that one of her pupils was smaller than the other and her eyelid was drooping.

The family was referred to a neuro-ophthalmologist in Montreal, who ordered a CT scan that he hoped would show the cause of these symptoms. The test results showed something the family never expected — a tumor in Laila’s neck. 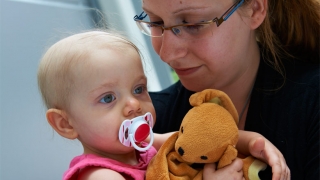 “We were rushed off to meet with an oncologist, and two days later she was in surgery to remove the tumor,” says Marie. “After examining the tissue they were able to tell us the diagnosis. It is a rare and aggressive cancer called extrarenal rhabdoid tumor. The tumor is normally found in the brain or kidney, so the location in Laila’s neck made it even rarer. Our doctor told us to prepare for a long and difficult fight.”

Chemotherapy started not long after Laila’s surgery. After doing extensive research about the best treatment protocol for this rare extrarenal rhabdoid tumor, her oncologist recommended they combine the chemotherapy with radiation.

“We met with a radiation oncologist who explained all the possible side effects of radiation treatments,” says Marie. “He warned us of many risks — deformation of her face, other cancers later in life, deformed teeth and nerve damage that could make her unable to swallow. He said that our best option was a different kind of radiation called proton therapy, which would reduce these side effects a lot.”

Proton therapy is an innovative form of radiation treatment that allows for more precise doses of radiation delivered to cancerous tumors. The greatest benefit of proton therapy is that it is less damaging to healthy tissue, because it delivers most of its energy to a very narrow field at the location of the tumor. There are no proton therapy centers in Canada where the Leclercs could have taken their daughter.

“The radiation oncologist told us that if Laila were his child, he would jump on a plane and go to Philadelphia. He is a very honest doctor, and told us that The Children’s Hospital of Philadelphia is one of the best.”

The medical team in Canada coordinated with doctors and international access coordinators at CHOP to arrange for the Leclercs’ arrival.

'It was a month and a half before Laila was well enough to make the trip from Montreal to Philadelphia. When she arrived at the Hospital, doctors placed a feeding tube and a port for the chemotherapy treatments she’d continue receiving while in Philadelphia.

Meetings with the oncologist, radiation oncologist, anesthesiologist and child life specialists who would care for Laila, both at the Cancer Center at CHOP and the Roberts Proton Therapy Center at the Hospital of the University of Pennsylvania, helped the family and team develop a plan for Laila’s treatment.

A crucial benefit of receiving proton therapy at CHOP is the availability of a dedicated pediatric anesthesia team for children who are too young, or unable for any reason, to lie completely still during treatment. At just 16 months old, Laila would be under anesthesia for each of her 28 proton therapy sessions.

A French-speaking medical interpreter was present at each meeting with the medical team and on each treatment day, translating conversations between the family and the physicians.

“She reacted really well to the proton therapy,” says Marie. “Laila was happy and in a good mood when she went for treatments, and would wave at all the doctors and nurses. She was comfortable with the staff at CHOP.”

Like all children treated at the Roberts Proton Therapy Center, child life specialists were among the friendly faces she saw each day, and these staff members helped Laila stay calm, relaxed and distracted with playtime before treatment.

Laila continued her chemotherapy regimen while in Philadelphia, and her care was smoothly transitioned back to her primary team after her treatment course in Philadelphia, thanks to close communication between her treating teams in the United States and Canada. The family will come back to follow up with the team at CHOP once a year, and their medical teams at home and abroad will be in touch regularly about Laila’s progress.

“Our time in Philadelphia was one that we will never forget,” says Marie. “We were warmly welcomed when we arrived and well attended to.”

When asked what she’d tell other families considering traveling to another country to get medical care for their child, Marie says, “If you want the best for your child, you should do it. We can’t say that it’s easy, but it was worth the challenges to do this for Laila.

"She is a champion. She is the best.”