Cole, 12, was born with multiple cardiac conditions. For most of his life, he received life-saving drugs through a Broviac catheter, which prevented him from participating in many activities. Today, he’s able to treat his pulmonary hypertension with oral medications, which allows him to pursue the outdoor activities he loves like hiking, camping and kayaking. 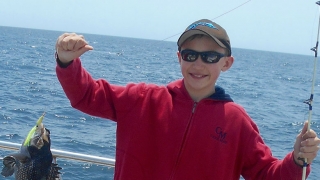 When Cole was born at a medical center near his home in Cape May, NJ, he appeared to be healthy at first. But things quickly took a turn — his oxygen level was very low and his heart was struggling. With his health deteriorating rapidly, the medical team urged his parents, Beth and Mark, to have him transferred to a hospital with expertise in pediatric cardiac care.

Within hours, Cole was on a helicopter to Children’s Hospital of Philadelphia (CHOP), and his parents were at the start of one of toughest few days of their lives.

Upon his arrival, Cole couldn’t breathe on his own and was placed on a ventilator. Beth and Mark met with cardiologist Chitra Ravishankar, MD, who shared results of X-rays and an echocardiogram. She diagnosed Cole with transposition of the great arteries (TGA), in which the aorta and pulmonary artery are attached to the opposite sides of the heart.

“I remember praying,” says Beth. “We had been told he might not survive the flight to Philadelphia and now we were learning that he would need heart surgery. We had to put all our faith in these people we had just met. We’re not medical people, but they took the time to explain everything.”

Cole needed surgery at just 4 days old to correct the malformation, which was performed by Thomas Spray, MD, Chief of the Division of Cardiothoracic Surgery. Cole remained on the ventilator eight weeks after his surgery. Attempts to take him off support and allow him to breathe on his own were unsuccessful.

Cole’s medical team suspected that he also had a condition called pulmonary hypertension, in which there is high blood pressure in the arteries of the lungs. Pulmonary hypertension is a chronic and progressive condition. It has no known cure, but it can be managed with medications.

The Pulmonary Hypertension Program joined Cole’s team of specialists, and prescribed a drug to dilate his blood vessels and improve circulation. The drug had to be administered through a Broviac catheter, a tube inserted below the collarbone and fed through a vein directly to the heart. He responded well and was able to come off the ventilator and breathe on his own.

While the drug was saving his life, it brought multiple challenges. The medicine needed to be kept on ice and mixed in sterile conditions just before administration every four hours, day and night. To prevent infection, the catheter had to be kept clean and dry, and medications had to be kept perfectly sterile. Cole could also never be immersed in water. He would need to be cleaned with sponge baths, and wasn’t allowed to go swimming.

Beth, Mark and family members were trained in administering the medicine and maintaining and changing the catheter. After three months at CHOP, they were able to bring Cole home. “We went home from the Hospital as experts in giving the medication,” says Beth.

Over the next two years, Cole showed gradual improvement.

One afternoon when Cole was 2, his central line was accidentally pulled out, leading to an emergency trip to CHOP.

What might have been a medical disaster instead led to a positive change. While at the Hospital, Cole’s doctors decided to try him on oral medications that had recently become available.

He responded well, and from that point on, Cole didn’t need the Broviac catheter.

It made a huge difference in Cole’s life and removed some of the more challenging aspects of his care, such as cleaning the catheter and administering the drugs. Cole’s health was generally good for the next several years, and he grew into an active, outgoing child who loved sports.

Participation in a clinical trial

Cole hit a bump in the road at age 10. His energy levels started to decline, and he began struggling with everyday activities. A heart catheterization at CHOP showed that his pulmonary hypertension was worsening. His medical team proposed that Cole participate in a trial for a new oral medication called Orenitram®.

Cole started the trial in November 2015 and his energy levels quickly came back. He now takes an oral dose of Orenitram three times a day, along with a combination of other medications.

A lover of the outdoors

Now 12, Cole is thriving. He enjoys kayaking, hiking and camping. His father and grandfather run a fishing boat for visitors in Cape May, and Cole has become an avid fisherman. He also loves music, and plays the guitar.

“With Cole, we have always focused on what you can do — on the good things” says Beth.

“And we’ve always felt very supported in that by CHOP. That’s their approach, too. They really care about the kids. They try to make it enjoyable. I know bad things happen, that they must have tough days, but you never see it from them. Nobody there is ever negative. When we come in, the focus in on Cole — where he is and what he’s able to do.” 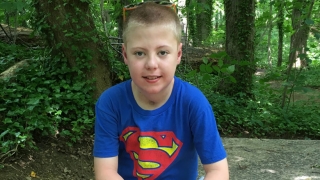 Chad’s odds of survival at birth were low. Today, he’s an engaged 11-year-old because of his resiliency and support from CHOP.