Emma, 8, is a bright and focused child, who loves art and music. Thanks to the Cardiac Center at Children’s Hospital of Philadelphia, her heart problems, including pulmonary hypertension, haven’t slowed her down.

Emma appeared to be a healthy baby at birth. But as her parents, Marianne and Michael, were preparing for her discharge from the hospital two days later, they were told that something was wrong with Emma’s heart. She needed to be transferred to Children’s Hospital of Philadelphia (CHOP), about an hour away from their home.

Marianne and Michael were stunned. Instead of bringing their baby home to join her older brother, they found themselves driving to Philadelphia while their daughter rode in an ambulance with an emergency medical team.

Tests at CHOP showed that Emma had tetralogy of Fallot with pulmonary atresia (TOF/PA). TOF is a congenital heart defect characterized by four issues with the heart, and PA is a heart defect in which the pulmonary valve is sealed and cannot open. Many children with PA, including Emma, also have a ventricular septal defect (VSD), a hole in the tissue between the lower chambers of the heart.

Emma was also born without a pulmonary artery, the artery carrying blood from the right ventricle of the heart to the lungs for oxygenation. The body compensates for the absence of the pulmonary artery by creating vessels that go from the aorta to the lungs. This is known as major aortopulmonary collateral arteries (MAPCAs).

Emma stayed at CHOP for 11 days, where she was monitored closely to see how well her circulation was moving oxygen from her lungs to the rest of her body. The medical team determined that, while the problems were serious, Emma didn’t require immediate surgery. They recommended holding off on surgery until she was a little older when her heart had grown larger.

For her first year, Emma lived a normal life. When she became upset or was very active, her lips would turn a little blue, but otherwise she appeared to be a healthy baby.

Surgery to reconstruct the pulmonary artery

Just before she turned 1, Emma’s parents brought her back to CHOP for the procedure to reconstruct her pulmonary artery. The operation was performed by Thomas Spray, MD, Chief of the Division of Cardiothoracic Surgery.

Dr. Spray worked to combine several vessels emerging from her heart into a single artificially constructed pulmonary artery. As part of the procedure, Dr. Spray inserted stents into the smaller vessels connected to the new artery to improve blood flow and better balance the pressure between her heart and lungs. This was intended to help reduce the high pressure in the heart-lung circulation as she grew older.

The surgery made Emma’s heart work more like a normal one, but it took some time for her circulatory system to adjust to the change. She went home on oxygen to help her breathe.

At a follow-up visit a month later, a new problem was discovered. Emma had developed an aneurism where the artificially created pulmonary artery attached to her heart. This swollen area had filled with fluid and was putting pressure on her heart. Dr. Spray performed emergency surgery to remove the aneurism.

After Emma returned home, she continued with periodic visits to CHOP for tests to monitor her progress and the health of her circulation. She started walking and talking, hitting all the normal developmental milestones on or ahead of schedule.

When she was 3, Emma was diagnosed with pediatric pulmonary hypertension, a condition in which there is high blood pressure in the arteries of the lungs. In the years since, Emma has had two cardiac catheterizations, procedures to expand the size of the stents that widen her pulmonary artery and connected veins. She is expected to need the same type of procedure every few years as she continues to grow, and may need surgery to replace the stents with larger versions, but her doctors are pleased with her progress.

A talent for art and music 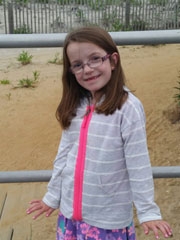 Now 8, Emma continues to take medication to reduce the pulmonary hypertension. So far, the hole between her ventricles (VSD) hasn’t appeared to hurt her circulation, so surgery may not be required to close it.

Emma continues to return to CHOP every three months to the Pulmonary Hypertension Program. At these visits, her heart and lung functions are checked with an electrocardiogram (EKG), echocardiogram and a six-minute walk test, and blood tests are done to monitor the effect of her medication.

Emma has grown into a smart and talented child, with passion for art and music. She plays the piano beautifully and is learning the violin. She enjoys playing outside and riding her bike and scooter. She tires more easily than her friends when engaged in physical activity, but recognizes those limits. Her heart issues haven’t slowed her down at all.

Her parents are grateful for the care CHOP has provided. “It’s truly an amazing place,” Marianne says.

“They have the best doctors, the best nurses, the best staff. And they love Emma. She's like a little celebrity when she comes into the Cardiac Center.” 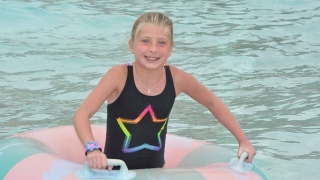