It’s hard to imagine your daughter’s future when you don’t know what lung problem is causing her to breathe faster than a newborn should. From her first moments, June’s breathing was abnormally rapid despite her being otherwise healthy. 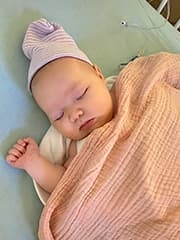 “At first, doctors thought it might be a little fluid in her lungs,” says Melanie, June’s mother. June was born a week past her due date and had aspirated some meconium. When four days in the local hospital NICU and a couple of weeks at home didn’t clear up the problem, June’s pediatrician sent her to Children’s Hospital of Philadelphia (CHOP) for a chest X-ray. “We had transitioned from ‘probably normal’ to ‘something strange was happening,’” Melanie recalls.

The “something strange” was confirmed by the X-ray and later by a CT scan, that showed a cloudiness in June’s lungs. The cloudiness, which doctors call ground glass opacity, could have several causes from an infection to a rare interstitial lung disease. June came under the care of CHOP’s Rare Lung Diseases Center.

What is interstitial lung disease?

“When they mentioned it could be an interstitial lung disease, I was in absolute shock,” says Melanie. “I work in healthcare, but I had never heard the term before. When I thought of lung disease, my mind went to the worst places.”

Children’s interstitial and diffuse lung disease (ChILD) is a group of diseases that cause a thickening of the tissue that extends throughout the lungs.

Interstitial lung disease (ILD) refers to the collection of rare pulmonary conditions that involve the interstitium, the space between the tiny air sacs (alveoli) in the lungs. The alveoli are responsible for taking the oxygen from the air, putting it into the blood, and exchanging it for carbon dioxide during breathing. If the interstitium doesn’t function normally, the exchange of oxygen for carbon dioxide can be diminished. For some types of ILD, babies and children may require high levels of supplemental oxygen and care in the intensive care units. Other forms may be milder and have a good prognosis. Thus, determining the specific type of ILD is essential for treatment and prognosis.

The Rare Lung Diseases Center, part of the Division of Pulmonary and Sleep Medicine, focuses on diagnosing and treating children with difficult-to-diagnosis lung problems.

In June’s case, she had sustained rapid breathing, but fortunately she continued to have normal blood oxygen levels and was growing well. “Dr. [Lisa] Young told us that she suspected one of the milder forms of ILD, but we couldn’t be certain until we did the necessary testing,” Melanie says. Lisa Young, MD, Division Chief and Co-director of the center, would know. She focuses her research on interstitial and other rare lung diseases.

Doctors took a step-by-step path to diagnosis, ruling out the most common causes first. The first diagnostic procedure was a bronchoscopy, a procedure when a thin tube with a camera at the end is put down the child’s airway to look for problems. It didn’t reveal signs of infection, so that was eliminated as a potential cause. There were also several rounds of lab tests to rule out cystic fibrosis and immunodeficiency, and genetic screening to look for a genetic cause or syndrome.

“After the genetic test came back negative for a cause, that’s when Dr. Young said it was time for a lung biopsy, so we could get to the bottom of what it was,” Melanie says. “It’s an intense procedure, but it was necessary for us to get an answer.”

In a surgical lung biopsy, the surgeon makes a small incision (in the back, in June’s case) and takes a small sample of lung tissue, which is sent to the lab for analysis. “Waiting for the results was difficult,” Melanie says. “It could be a devastating diagnosis, and I struggled with the worry.” 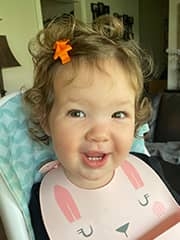 In pulmonary interstitial glycogenosis, an unusual type of abnormal lung cells accumulate in the interstitium of lung, making it harder for air sacs to do the oxygen-carbon dioxide exchange, so June was breathing rapidly to make up the difference. It’s a relatively newly discovered type of lung disease, having first been first described in 2002, and there are a lot of unknowns as to its cause.

Journal articles report that many children with pulmonary interstitial glycogenosis also have congenital heart defects and some have decreased formation of functional alveoli in the lungs. Sometimes pulmonary interstitial glycogenosis is seen when there is injury to the developing lung. For June, doctors wondered if the stress of an overdue birth and those gulps of meconium may have triggered it.

The good news about pulmonary interstitial glycogenosis is that it is limited to infants, and unless other complicating problems are present, it almost always goes away over a child’s first year or two. June didn’t have any additional abnormalities.

“In that moment Dr. Young told us that she was going to be OK, I felt like I had won the lottery.”

“We were lucky she didn’t have any of the other complications that could contribute to a worse outcome, like some premature babies with pulmonary interstitial glycogenosis can have,” says Melanie says.

“After so much fear over what the diagnosis could be, it was incredible to hear Dr. Young tell us: You can plan for her future; she will outgrow this,” Melanie says. 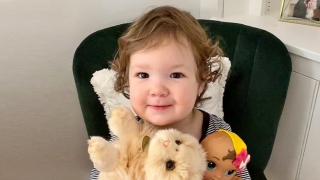 June’s only treatment was a three-day course of high-dose steroids at 2.5 months old. As her fast breathing then gradually resolved, no further treatment was needed. “At her last appointment, everything looked great,” Melanie says.

June, now 18 months old, has developed normally, hitting her milestones. “She’s running all over the place, getting into everything,” Melanie says. “She’s learning to talk and communicates with us all the time.”

She keeps busy indoors giving her babydoll kisses and happily getting cuddles from Melanie and dad Joe. She loves the outdoors and is fascinated by bugs, leaves and animals. “She’s very curious about the world,” her mother says. “She has spunk and feistiness, which helped her get through her hospital stays I’m sure.”