Mia was just over 1 year old when the fevers started. A lot of them. “I would check her in the morning before I went to work and she’d be fine, and my mom would come to babysit, and at 8 a.m. she would check her and she would be 100 degrees,” her mom, Teresa, recalls. Repeated trips to the pediatrician turned up nothing. 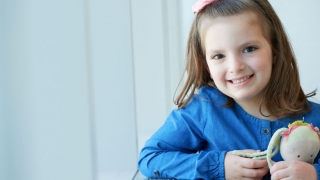 Extremely worried, Teresa and her husband, Mike, began making appointments with specialists. They brought her to infectious disease specialists at Children’s Hospital of Philadelphia (CHOP). They made appointments with a rheumatologist, a hematologist, even an oncologist. But no one could help – and the fevers persisted: For an entire weekend in November 2014, Mia’s temperature hovered around 102 degrees.

Teresa and Mike were at a loss for where to turn. And then a new symptom appeared, and immediately life became, as Teresa describes it, “a whirlwind.” Mia developed tiny, round, brown-purple spots known as petechiae. Her pediatrician sent the family to the local emergency department, and the results of Mia’s bloodwork showed cancer had been causing the weeks of fevers.

Mia, at 1 1/2 years old, was admitted to CHOP, where a biopsy pinpointed the cancer as  T-cell acute lymphoblastic leukemia. She spent a month receiving chemotherapy. After she went home and began her outpatient treatments, numerous infections sent her back to the hospital. One E. coli infection put her in the hospital for four weeks. “Every time she was sick and bedridden, she would regress and stop walking and have to learn all over again,” Teresa says with dismay.

It was a rough year, but Mia completed her first-line chemotherapy and was on maintenance treatment. Then, just after Mother’s Day 2016, the cancer returned.

A stem cell transplant (SCT) was now needed. Mia was admitted to CHOP for the intense chemotherapy and radiation needed to prepare for the procedure. Because of her weakened immune system, she wasn’t allowed to have contact with many people.

“By this time, she was old enough to understand more,” says Teresa. “She cried to go home. She was always on isolation, not allowed to go out. There was a lot of play therapy and art therapy in her room. She didn’t get to spend time with other kids. She was always with adults — me or my husband or our parents or the nurses.”

The cancer was stubborn, but finally Mia was in remission. For the SCT, she needed to be closer to CHOP than the family’s home in Howell, N.J., so Teresa and Mia found a place in Philadelphia to live for three months. With Mia’s two older brothers, Ryan and Logan, at home, the family’s schedule was complex. During the week, Mike went to work and both his and Teresa’s parents stayed with the boys. On the weekends, Mike would stay with Mia in Philadelphia and Teresa would head to Howell to see her sons. “I barely saw my husband that whole time,” she remembers.

Mia underwent the SCT in August 2016, when she was 3 years old. “When we went in for transplant, all she wanted was to eat waffles and go home,” says Teresa. “We couldn’t give that to her, and it broke our heart. She just asked for two things, and we couldn’t give them to her.”

The transplant, though so difficult for Mia and her family, was successful. A year after the procedure, the family decided they wanted a fresh start and moved to New Egypt. N.J.

Now Mia is done with all treatment and approaching three years cancer-free. Teresa admires her daughter’s ability to forget the bad: “Looking back, she only remembers the positive, the nurses and doctors and how they made her better.” And Teresa enjoys watching Mia experience all the things she missed that are now so new and good: “Now when we go to parties, it’s the best thing ever, because she never experienced things like that.”

For a nearly 6-year-old girl who spent long stretches isolated and bedridden, Mia is very adventurous. The family gets season passes to the amusement park near their home, and Mia is planning for a whirlwind future: “When I get bigger, I’m going to go on all the big rides!”