Before Sam was born, he was diagnosed with a life-threatening heart condition called hypoplastic left heart syndrome, a severe congenital defect in which the left side of the heart is underdeveloped. 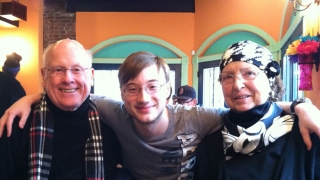 His family learned he would need a series of open-heart surgeries to repair the defect, and that one hospital offered him the best chance for survival — The Children’s Hospital of Philadelphia.

Sam's family traveled from their home in upstate New York to Philadelphia so his mother Jennifer could give birth in a hospital close to CHOP.

Shortly after he was born, Sam was transported to CHOP and preparations were made for his first open-heart surgery. Sam has had two additional surgeries since then — one when he was 6 months old, and another when he was 2½ year old.

Throughout his childhood and into his teens, Sam continued to be treated at CHOP. During longer hospital stays, he needed something to help pass the time.

That’s when child life specialists came to the rescue. They provided Sam with games and electronic devices like iPads and e-readers to help distract him from his illness and being in the hospital.

Rick and Gert, Sam’s grandparents, are so grateful to CHOP, the Child Life, Education and Creative Arts Therapy, and the child life specialists who provided outlets for Sam to act like a kid and have fun — despite his condition.

Now a healthy young man, Sam is enjoying a full life. His grandparents are certain CHOP is the reason why.

Your gift to the Grandparents Fund will improve the lives of sick children — like the one featured above — and help CHOP continue to provide vital services to patients.