When Liam was diagnosed with a cancerous tumor above his knee, a connection was made with his history of gastrointestinal problems and poor growth. Genetic testing revealed he had a rare disorder that gave him a predisposition to develop osteosarcoma. To remove the tumor’s site, Liam had a surgical procedure that turned his ankle joint into a knee joint. 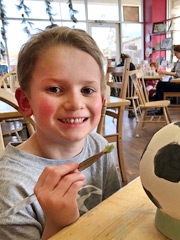 Liam, 7, is passionate about soccer. You can tell by the way he dresses: Almost every day he wears a soccer jersey. It was while he was playing soccer, in February 2018, that the first sign of trouble emerged. He started limping.

His family took him to an orthopaedist, and an X-ray revealed the cause. “They said it was a benign cyst on his left femur just above the knee,” says his mother, Cory. An MRI showed the lesion to be partially sac-like and partially solid. On Feb. 14, a surgeon removed the tumor and performed bone grafting.

“A week later, they called and said ‘cancer,’” explains Cory.

Indeed, an examination of the removed tissue revealed a high-grade malignancy. The family came to Children’s Hospital of Philadelphia (CHOP) for a second opinion.

“When he was born, he had problems gaining weight and had food allergies — it seemed like to everything,” says Cory. “He needed a feeding tube until he was 4. But then he seemed to grow out of it. He started eating everything.” No underlying problem had been identified.

The role of Rothmund-Thomson syndrome

His CHOP team noted that Liam had a mild skin rash and small teeth. In combination with a diagnosis of a bone cancer, these symptoms suggested a particular genetic disorder, Rothmund-Thomson syndrome (RTS). Identifying possible RTS was important because patients with this syndrome are known to have a predisposition to develop osteosarcoma. Liam’s genetic testing for the RTS mutation was positive. The cause of his unusual combination of symptoms was finally determined.

With the help of the Division of Genomic Diagnostics, pathologists at CHOP confirmed the diagnosis of osteosarcoma. Tests showed that Liam’s tumor had not spread elsewhere in his body. On March 14, Liam started on chemotherapy. His side effects were significant, so his chemotherapy doses were reduced, and he tolerated subsequent chemotherapy cycles better over time.

A decision needed to be made about how to achieve local control of the disease. The family was presented with options that included amputation above the knee and a procedure called rotationplasty surgery. A rotationplasty is a “functional amputation” in which the knee — the site of the cancer — and most of the shin is removed. Then the foot is rotated 180 degrees on the vertical axis so the ankle flexes in the same direction as a knee joint, and is attached to the lower thigh to become a functioning knee joint.

When the procedure was first described to the family, “I thought I was going to pass out,” says Cory, shaking her head. But then she started to diligently research the options. She discovered that having a “real” — as opposed to artificial — knee joint ends up being a huge benefit. The procedure also eliminates the phantom limb pain that many amputees experience. The reversed foot fits into a prosthesis that would let Liam remain as active as possible

Nonetheless, the decision was complex. “He is a very young kid with a lot of growth remaining,” explains orthopaedic and oncologic surgeon Alexandre Arkader, MD. “Then there was Liam’s desire to be as active as possible.”

The family joined Facebook discussion groups for rotationplasty. Because the procedure has been around for decades, they talked to people who’ve lived with it for many years and have had positive experiences. Says Cory, “I asked Liam, ‘Do you want two legs that look the same or two legs that look different but let you do everything you want to do?’” Liam decided he didn’t care whether his legs looked the same.

On May 30, 2018, Dr. Arkader performed Liam’s rotationplasty surgery. “Liam needs a prosthesis for adequate ambulation,” explains Dr. Arkader, “but the function is compared to a below-knee amputation, rather than a high amputation. He is able to return to full activities without restrictions. Liam has done fantastically well with his physical therapy, and his mobility is impressive.”

All family members are thrilled with CHOP. “Rothmund-Thomson syndrome is very rare, but Dr. Bagatell has seen three others with it, so she recognized it,” says Cory. And Cory describes oncology nurse navigator Shannon Froio, RN, as “phenomenal — a game-changer. She talked us through everything.”

Although Liam needs the prosthesis in certain situations, for now he doesn’t always like wearing it. As Cory puts it, “He hops everywhere he goes. We play soccer, and he scores on us all the time.”