Savannah’s mom, Karen, wanted something simple: To feed her child healthy, whole foods so she could thrive. But Savannah was tube-fed and commercial formulas available at the time caused Savannah gastric distress. Karen couldn’t help feeling she was falling short at a basic parenting requirement. By working with dietitians at Children’s Hospital of Philadelphia (CHOP), Karen found a solution that met Savannah’s nutritional needs and helped her feel good about feeding her child again. 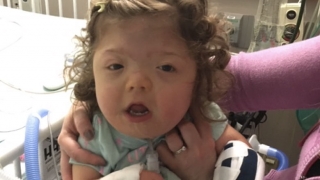 Five-year-old Savannah has Saethre-Chotzen syndrome and genetic deletions that present her with several medical challenges. Among them, she has a tracheotomy for ventilator support and has been fed through a gastrostomy tube (G-tube) since she was 2 months old.

For the first seven months of Savannah's life, she was tube-fed breast milk. When Karen returned to work, she switched Savannah to infant formula. There were problems immediately.

"As soon as we switched, she had frequent vomiting, constipation, retching, irritability," Karen says.

For the next two years, Savannah's family struggled to find a commercial formula that would help her grow and thrive. Savannah was in and out of the hospital with a slew of gastrointestinal (GI) issues.

Searching for answers, Karen began to look closer at Savannah's tube feedings. After reviewing the ingredients listed in Savannah's commercial formula and feeling dissatisfied with the quality of nutrition, Karen's journey for alternative methods of tube feeding began.

Savannah's symptoms upset Karen so much that she began looking for answers on her own. She discovered a blog by a woman who'd developed her own blenderized tube feeding recipe from organic, whole food, and decided to give it a try. While some of Savannah’s symptoms subsided, she continued to vomit frequently.

“Looking back, I feel like I was a mad scientist in the kitchen,” she says. “When your kid is sick and you can’t do anything for them, it's the worst feeling in the word. I kept trying to tweak the recipe, but I didn’t know what I didn’t know.”

When Savannah was hospitalized at CHOP for yet another GI issue, Karen met Shiela Falk, RD, LDN, a clinical dietitian. The two women developed a bond while caring for Savannah together and looking into new feeding options.

“I could tell Shiela really cared about her patients,” Karen recalls. “I felt I could trust her. And she could tell I was desperate. It had been two years of watching my child throw up every day, looking more malnourished.”

Parents and clinicians working together 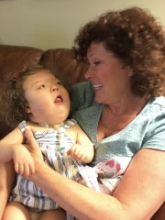 That visit led to two vital steps in Savannah’s medical journey: First, tests showed Savannah had a motility disorder, which was causing the frequent vomiting and GI symptoms.

Motility experts at CHOP prescribed Savannah new medication that virtually eliminated her vomiting episodes. And second, Karen found a dietitian willing to work with her to find a whole food blend that was a better fit for Savannah’s nutritional needs.

"I had been doing the best I could on my own, but I’m not a nutritionist," Karen says. "I needed guidance."

She found that in Falk. “Shiela really tried to understand what I was looking for to help my daughter.”

Falk explained that some children who need tube feedings benefit from a whole food blend because of the increased fiber in their diet. But, she added, there is an emotional component to food and feedings as well.

“I get a lot of enjoyment in feeding my child. Food connects us as people," agrees Karen.  “You want to feel good about the foods you are giving them."

G-tube feedings can be customized to meet a child's unique nutritional needs — and a family's desire to feed them the best food possible.

After their discussion, Falk examined the home blenderized tube feeding recipe Karen had been using. It wasn’t a bad recipe, but for Savannah’s specific needs, it was too high in fat and had too little protein and total calories.

There was one condition: Falk wanted Savannah to be seen on an outpatient basis by a CHOP dietitian who could monitor her progress and tweak the home blenderized tube feeding as needed. Karen and Savannah have seen Margaret "Mimi" Girten, RD, CSP, LDN, a dietitian at CHOP Specialty Care Center in Exton, PA, ever since.

Once using the new blenderized tube feedings, Savannah grew quickly. Karen felt more comfortable with her daughter's feedings, and clinicians were happy with her development.

“I think the world of Shiela and Mimi. They are what medical professionals should be — they listen,” says Karen. “They helped me care for my daughter in the way I wanted to. When you feel like the people caring for your child also want what is best, not just easiest, it’s huge.”

One of the reasons it took so long for Karen to find dietitian support for whole food blenderized tube feedings is that CHOP, like most other hospitals, had no policy in place regarding them.

“Every time a patient used a new blend, we had to go from the ground up to analyze the nutrition," Falk says. "This year, CHOP created a process which allows parents and caregivers to continue feeding their child home blenderized tube feedings during hospital admissions.

“We realized parents are going to do this — with or without us — so we needed a better way to support them," Girten says. The new process for use of home blenderized feeding during inpatient admission is comprehensive, covering everything including creation, storage, rules for inpatient use and more.

“The new process launched in January 2019 and parent reaction has been great,” Girten says. “And it’s a living document. We continue to learn from parent feedback received and will update the process as needed.”

Savannah remained on a home blenderized tube feeding for more than a year, with occasional tweaks by Girten to ensure Savannah stayed on a solid growth path.

Eventually, Karen — who had been fully committed to home blenderized whole food tube feeds — switched to a new, commercially available whole food blenderized formula. She had been spending hundreds of dollars and dozens of hours each month making Savannah’s blend at home. With a job and other young children to tend to, it had become too much. When Girten suggested a new commercial blend based on whole foods, Karen agreed to give it a try.

“Mimi and I have the same philosophy of food as medicine,” says Karen. “I trusted her judgment. When I read about it, the first ingredients after water are beans, peas, quinoa, etc. Every ingredient is something I would have in my pantry.”

Girten helped Karen get the new whole food commercial blend approved through the family's insurance and it’s been smooth sailing ever since. 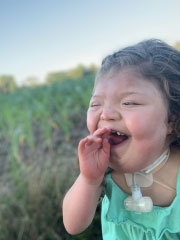 Savannah has been on her new whole food commercial blend for about 2 ½ years, and Karen reports her daughter rarely vomits any more, and has been able to decrease her motility medication.

More importantly, Savannah’s development is taking off like a rocket. “She hadn’t really hit many milestones before,” Karen says. “Now she is sitting up, pulling up to stand, starting to walk."

Savannah's condition is complex and her future is uncertain, but for the first time, Karen has hope.

"For the first three years of her life, I thought her quality of life would be extremely poor," Karen says. "But now, I feel like the sky’s the limit. It will take her longer, but I feel like she can do anything.”

Girten and Falk says they are pleased they could play a positive role in Savannah's life and future.