The magic of the holiday season is reflected in the toothy grin on Evan's face. The 7-year-old's eyes light up when he sees the multicolored glow of holiday lights on the tree, hears his family singing carols, touches cookie dough, and smells gingerbread. 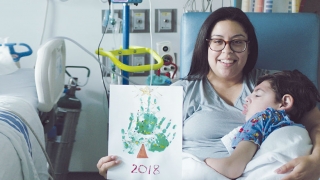 This year is extra special to Evan's mom, Evelyn, because her son survived a life-threatening medical emergency in which he suffered continuous seizures and was placed in a medically induced coma.

After 33 days in the pediatric intensive care unit at Children's Hospital of Philadelphia (CHOP), Evan was home for Halloween and his 7th birthday on Nov. 3, and Evelyn has no doubt he'll be home for Thanksgiving and his favorite holiday: Christmas.

"We have so many traditions for Christmas, and Evan is part of every one," Evelyn says. Evan has complex medical issues including congenital hydrocephalus, cerebral palsy and seizures. He cannot talk but is able to express himself with sounds, facial expressions and gestures.

Every year, he helps his mother bake cookies, puts the ornaments on the Christmas tree, decorates gingerbread houses, and enjoys the commotion of family and friends as they sing, play games and enjoy a holiday feast.

This year, Evelyn plans to get Evan a train that he can watch circle the tree.

"Those are some of our happiest times: sitting together and looking at the lights on the tree," Evelyn says. "It's just so peaceful being with my family and enjoying our time together — that's what the holiday is really about."

Life has been challenging for Evan and his family. Before he was even born, doctors diagnosed Evan with congenital hydrocephalus, a condition where fluid builds up in the brain and the cerebral ventricles are enlarged. Hydrocephalus is treatable after birth, but in many cases, it causes irreversible brain damage.

Within Evan's first year of life, he had three brain surgeries to insert, remove and reinsert shunts on the left side of his head. At 1 year old, Evan was diagnosed with cerebral palsy, a lifelong condition that affects the communication between the brain and the muscles. The neurological disorder can also cause seizures, intellectual disabilities and other issues – all of which Evan developed.

The seizures began when Evan was a baby. Treatment with medication – and later the ketogenic diet — helped for a while, but never totally controlled his condition.

In May 2018, Evan's seizures dramatically increased in frequency. "He was having about 40 seizures a day," Evelyn says. His doctors changed medications, but Evan didn't improve.

Three months later, Evan went into status epilepticus; his seizures were continuous, one after another, and he was no longer recovering consciousness between them. Status can be fatal if not controlled. Evelyn was terrified. "I really thought I was going to lose him," she says.

Coming to CHOP after crisis

When the family's local hospital in New Jersey said there was nothing else they could do for Evan, he was transferred to CHOP, where a specialized team of doctors assessed and treated him. They quickly determined the best immediate treatment was to put Evan into a medically induced coma to halt the continuous seizures.

Then, clinicians from the Justin Michael Ingerman Center for Palliative Care team worked with neurologists and other specialists to revamp Evan's entire treatment plan, including the types and dosages of his medications. They also adjusted his ketogenic diet to subtly change the percentages of fat, carbs and protein he was ingesting.

"The Center for Palliative Care team was amazing," Evelyn says. "They were there with me every step of the way: when I needed to talk, run out of the room or just get coffee. They made sure Evan was comfortable and that I was taken care of."

After a week, Evan was brought out of the coma, but it was a few weeks before his breathing tube could be removed and he could breathe on his own. He was sleepy at first, but eventually began acting like himself again. "He's a little character," Evelyn says. "He's stubborn and happy and always smiling — even when he's sick."

Evan’s and Evelyn's lives are now back to normal. Evan goes to a specialized school where he interacts with other children with complex medical and intellectual needs, and Evelyn works part-time as a nurse. A home care nurse helps address Evan's medical needs.

Every other weekend, Evan goes to the movies, the aquarium or on another outing with his dad, Robert. The pair frequently wear matching sneakers, Evelyn says.

Evan loves books, cartoons and music. He and his mom read the classics, like Dr. Seuss, Little Golden books, the Berenstain Bears and Harold and the Purple Crayon. On TV, he's all about Paw Patrol, Mickey Mouse Clubhouse and other Disney and Nickelodeon Jr. shows.

To Evelyn, every day with Evan is filled with breakthroughs — even though milestones like baking cookies, reading a book, and decorating the tree may seem small to others.

"I hope he lives a long life, that he's happy, and that he keeps his million-dollar smile," Evelyn says. "That smile is the best present — it takes all my stress and worry away."