When 8-year-old Conall became a patient at Children’s Hospital of Philadelphia (CHOP) in 2015, he quickly became a staff favorite. Bright, witty, and quick to smile, Conall captured the hearts of everyone he met. His story is one of strength, faith and resilience in overcoming two very serious illnesses — sepsis and acute lymphoblastic leukemia. It’s also the story of the medical professionals who quickly identified his symptoms — and saved his life. 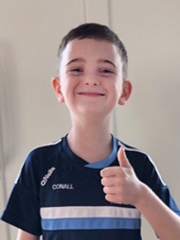 When Conall was 5 years old, he experienced an intense, escalating set of symptoms, including fever and vomiting, that quickly sent him and his worried parents to their local hospital. In the emergency room, a physician suspected sepsis and followed standard sepsis protocol — a decision that would save Conall’s life.

Sepsis is a life-threatening condition that can happen to anyone, but people of younger or older age and those with weakened immune systems are at particularly high risk. Sepsis occurs when the body’s immune system goes into overdrive fighting an infection, and creates a chain reaction in the body. The body’s inflammatory response to infection can, over time, slow blood flow and lead to organ failure, shock and death.

Conall was stabilized and transferred to CHOP the same day, and a team of physicians quickly set to work identifying the source of his infection. His condition was grave.

“We all knew CHOP,” says Conall’s father, John. “But we didn’t know what was causing this nightmare. We didn’t even know he had cancer at the time.”

“CHOP is the best place for this kind of thing.”

Doctors soon identified a strep infection as the trigger for Conall’s septic shock. His immune system had been weakened, his parents would discover a day later, by an underlying, undiagnosed illness: acute lymphoblastic leukemia. As Conall slowly began to recover from sepsis, he also started treatment for leukemia. His initial hospital stay would last two months.

While Conall’s life was saved by the early actions of a quick-thinking emergency room physician, the septic shock he experienced led to the loss of both of his legs below the knee and all of the fingers on his right hand.

Sepsis is an overwhelming and life-threatening response to infection that causes organ failure. Read about the causes, symptoms, diagnosis and treatment of sepsis.

Septic shock has a high mortality rate. Prevention, early diagnosis and treatment are critical elements of CHOP’s Pediatric Sepsis Program. Conall’s strength pulling through the harrowing experience of septic shock gave his parents hope that he could overcome his cancer diagnosis.

Conall’s cancer went into remission in April 2015. He then began a maintenance chemotherapy regimen, which he completed in the spring of 2018.

During Pope Francis’ visit to North America in 2015, the Harvey family saw the pope celebrate mass at the Cathedral Basilica of Saints Peter and Paul in Philadelphia. Pope Francis blessed Conall during mass. “It was a very emotional, very special moment for this Catholic family,” explains John.

Conall has faced setbacks, but he continues to push forward. Bone spurs formed around his amputated legs, which required surgery and a long recovery period. But since completing chemotherapy in 2018, Conall has grown stronger and is walking well on his prosthetics.

A return to normal

The tight-knit Harvey family includes parents John and Christin, and four children ranging in age from 16 to the youngest, 8-year-old Conall. Conall is in the Cub Scouts and enjoys playing soccer and Gaelic football. (His family even traveled to Ireland to meet the Tyrone Gaelic Football team!) He also loves to research animals and scientific facts, and is known for his wit, curiosity and kindness.

“I don’t know if it is because he’s been through so much in the hospital,” says his dad. “But he’s in the present all the time. Conall enjoys every moment for what it is.”