Born 13 weeks premature and weighing a little more than a pound, Taylor almost didn’t make it through her first year of life. Today, thanks to expert, coordinated care, and an innovative approach to treating her lung disease and pulmonary hypertension, Taylor is a happy toddler who loves dancing, playing the drums and listening to music.

Taylor’s medical issues began before birth. At a 20-week prenatal ultrasound, her parents, Tammy and Ty, learned that their baby wasn’t growing as quickly as expected. In fact, her measurements were five to six weeks behind a typically developing fetus. At a follow-up visit with her maternal-fetal medicine specialist in Harrisburg, PA, Tammy’s blood pressure climbed dangerously high, and she delivered Taylor — 13 weeks before her due date. 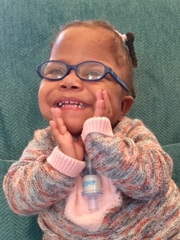 Taylor weighed just over a pound at birth. She had difficulty breathing and was diagnosed with respiratory distress syndrome, a condition caused by lungs being very immature. Taylor was intubated and put on a ventilator to help her breathe.

Over the next few months, Taylor continued to struggle to breathe on her own and had difficulty gaining weight. She was given caffeine to stimulate her breathing, antibiotics to treat infections, and intravenous nutrition to help her grow. She also received steroids to help her wean from the ventilator, followed by various non-invasive respiratory support measures.

By the time she was 5 months old, Taylor’s condition had improved enough that she was almost ready to go home — but suddenly things took a turn for the worse. Taylor began to show signs of respiratory distress. She would tilt her head back as though she was air hungry. She also started to have “blue spells,” and required a lot more oxygen. An echocardiogram of her heart showed signs of pulmonary hypertension, a condition in which the pressure in the blood vessels in the lungs is very high, causing extra strain on the heart.

Instead of going home, Taylor was re-intubated, started on inhaled nitric oxide (iNO), a therapy used for patients with pulmonary hypertension to decrease pulmonary arterial pressure, and airlifted to Children’s Hospital of Philadelphia (CHOP).

Tammy followed Taylor to Philadelphia in her car. When she arrived, Taylor had already been admitted to CHOP’s Newborn/Infant Intensive Care Unit (N/IICU). She was on a ventilator and receiving oxygen and iNO to help her breath and relax her lung vessels.

Taylor had developed human metapneumovirus. In adults, the disease typically causes a mild respiratory infection. But for Taylor — who at 5 months old weighed just 5 lbs. and already had severe chronic lung disease — the virus triggered a health crisis.

The team also confirmed that she had developed chronic lung disease-associated pulmonary hypertension, and the condition was threatening Taylor’s life.

“That weekend she was so sick that if you touched her, she would clamp down, preventing air from moving in or out,” Tammy remembers. “Doctors and nurses were constantly rushing over to her. I was crying all the time.”

A few weeks later, another crisis emerged — Taylor developed enterovirus. Her liver became enlarged and her body so swollen that she was almost unrecognizable.

The care team tried different ventilation strategies and medications to help her breathe. However, Taylor remained in critical condition despite being on 100 percent oxygen. Almost out of options, Dr. Munson approached Tammy with a slim glimmer of hope. Working together with the Pulmonary Hypertension team, he put Taylor on a continuous infusion of an intravenous medicine used to open pulmonary arteries in patients with severe pulmonary hypertension.

There was no guarantee it would work — but it did. Taylor responded immediately to the treatment and her vital signs began to improve. The swelling in her body and the pressure in her heart began to decrease. Against all odds, Taylor was back on a positive path. 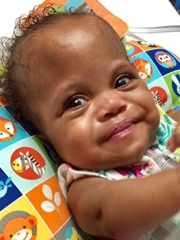 Even with her health improving, at 8 months old, Taylor was still too sick to be discharged from the Hospital. Her parents met with the medical team to discuss next steps. The plan proposed was to switch Taylor’s respiratory support from intubation (a tube that goes down her throat) to a tracheotomy (a hole in the base of her trachea). This would allow Taylor to have a stable airway for long-term ventilator support while being more mobile.

The family agreed to the change and saw immediate results. Tammy says:

To continue supplementing her nutrition, a nasogastric (NG) feeding tube, which went in through her nose into her stomach, was replaced with a gastrostomy tube (G-tube), which went through her skin directly into the stomach.

Premature infants with chronic lung disease often face significant complications, and specialized care is critical to achieving the best long-term outcomes possible. In the hands of CHOP’s experienced team, Taylor had access to coordinated care and the newest and most innovative therapies available.

Two months later, Taylor was transferred out of the N/IICU and into the Progressive Care Unit (PCU). With the tubes removed from her nose and mouth, therapists began working with Taylor on improving her developmental skills and mobility.

On January 28, 2016, Tammy and Ty brought their daughter home for the first time. Taylor was 14 ½ months old, and had spent 437 days between three hospitals.

Today, Taylor is 2 ½ years old. She’s a happy child with a ready smile and cheerful demeanor. She is walking, uses  more than 100 signs to communicate, and is building up her  speech vocabulary. She loves watching The Wiggles, and enjoys reading books with farm animals and imitating their sounds, listening to music, dancing and playing the drums.

For infants with complex medical problems like Taylor, the first few years after initial hospital discharge are critical for the proper growth and healing of the lungs, airway and heart. Follow-up with a highly specialized team is essential.

Taylor still receives her medication and most nutrition through her G-tube, but it is now supplemented by baby food and small bites of any soft foods her parents are eating.

The future is bright for Taylor, and Tammy says she owes that to the care her daughter received at Children’s Hospital.

“The staff at CHOP is amazing,” says Tammy.

“They became family to us. I don’t know whether I would have gotten through it without being surrounded by such uplifting and positive people. They went above and beyond for Taylor, and they took care of me, too.”— Tammy