Lisa, 13, loves to dance. She’s been a classical Indian dancer since she was 5. 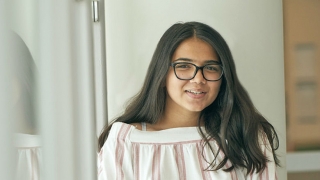 When she was 10, her favorite pastime was nearly brought to a screeching halt by an injury to her hip.

Lisa was rock climbing in the summer of 2015 when she slipped and the harness around her waist stopped her fall — as it was designed to do. But something about the placement and tightness of the harness hurt her hip. She couldn’t climb any more that day. The next day, when she was at dance practice, she had to stop because of the pain.

Her mother, Anu, took Lisa to the doctor. After examining her, he said she might have bruised her leg, but that it would get better with time.

Two weeks went by and Lisa was still not walking normally. She saw a pediatric orthopedist in East Brunswick, NJ, who looked at the X-rays, examined Lisa and told her there was a problem with her femur (thigh bone). He said that she might need surgery.

“The way the orthopedist explained it to us left us both scared,” says Anu. “He told us that Lisa had a serious injury, but the surgery sounded like it had risks as well.”

That was on a Thursday. The next day Anu called Dr. Sankar’s office, and had the X-rays forwarded. She was told to bring Lisa to the emergency room at CHOP.

Diagnosis and treatment at CHOP

“We very anxious going in,” says Anu. “Lisa was in tears. But as we entered CHOP, there was a ‘Welcome Lisa’ sign, and we could see that the facility was very inviting for kids. We met Dr. Sankar, and he explained everything so clearly to both of us, and then again separately to Lisa. He gave her an iPad with a visual explanation of her problem and how the surgery would correct it. Within 10 minutes she was interacting with everyone.”

Lisa was diagnosed with slipped capital femoral epiphysis (SCFE), a condition in which the head of the thigh bone, the ball that fits into the socket of the hip joint, is displaced. The problem occurs in young adolescents who have open growth plates. While it is still growing, a layer of cartilage separates the straight part of the femur from the ball at the head of the bone. This is the junction that gives way in a SCFE. It can be imagined as a scoop of ice cream slipping off the end of the cone.

The treatment is surgery to place a screw within the femur it to keep it in line until the child is finished growing and the bone solidifies.

The family agreed to the surgery, and the procedure was scheduled for later that day.

“All of the nurses were amazing,” says Anu. “They were interested in her, asking about her dance performances. It took her mind off her worry. As they wheeled her into the operating room she was smiling. Then when she came out, she was in pain, but the first thing she said was ‘Please tell Dr. Sankar thank you for fixing me.’”

After recovering from the surgery, Lisa began a program of physical therapy that included periodic visits to CHOP. She worked at it diligently, and before long was walking normally again, then dancing.

“Whenever I see her dancing, my tears start rolling,” says Anu. “I’m so thankful to CHOP, to Dr. Sankar, to all of the nurses who were so amazing. They were like angels.”

Lisa is thankful too. To show her appreciation she created “Cakes for a Cause” — a baking operation that raises money for CHOP. She gives cooking lessons to other kids, and the cakes they cook in the lessons, together with other cakes she and her friends make, are sold at bake sales to raise money for CHOP. She raised $1,000 for CHOP in 2016, $2,000 in 2017, and plans to keep it going.

The high point in Lisa’s road to recovery came a little more than a year after her surgery; she performed beautifully, with two healthy hips, in a dance festival at Madison Square Garden.