On a family vacation in September 2011, Valerie Shriver noticed her 12-year-old son Zachary was limping. A month later, he could barely walk. 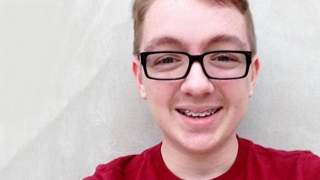 After being examined by four different physicians near the family’s home in York, PA, an orthopaedic doctor at Hershey Medical Center finally diagnosed the problem: slipped capital femoral epiphysis (SCFE) of his left hip, a common hip condition in adolescents. It affects about 11 children out of every 100,000.

In SCFE, the head, or "ball," of the thigh bone (referred to as the femoral head) slips off the neck of thigh bone. This condition causes the hip joint to become painful and stiff. In Zachary’s case, the SCFE was extremely unstable. If left untreated, the SCFE could lead to bone death (avascular necrosis), which could produce long-term health complications.

“The doctor told us he thought Zach’s condition was too far progressed for him to fix it,” Valerie says. “That’s when we really got concerned.”

Zachary’s doctor referred the family to Wudbhav N. Sankar, MD, at The Children’s Hospital of Philadelphia. Dr. Sankar is a nationally renowned pediatric hip expert who regularly performs complex hip surgeries that are unavailable elsewhere in the region.

The standard treatment for SCFE is to surgically implant a screw into the hip to stabilize it. Afterward, the patient is monitored to ensure the condition doesn’t worsen or require further intervention. The limitation of this procedure is that it doesn’t fix the displacement of the ball of the hip joint; it just prevents it from getting worse.

“In Zachary’s case — where the SCFE was so severe — if he had received the standard treatment, he wouldn’t have been able to sit normally. His movement would have been very restricted,” Dr. Sankar says. “This would have affected him for the rest of his life.”

Dr. Sankar explained that during this intricate operation, he would surgically dislocate Zachary’s left hip (take the ball of the thigh bone out of the hip socket). He would then carefully realign the head of the femur bone and use screws to reattach it in the correct position. Finally, he would need to fix the surgical dislocation by putting the thigh bone back into the hip socket.

There was no question that what Dr. Sankar was suggesting was a more unconventional approach. The surgery would be more invasive, Zachary would be under anesthesia longer, and his recovery would take more time. But if the operation was successful, Zachary’s hip joint would be restored to normal function. He’d be able to walk, run and sit with ease — and he’d be pain free.

“The risks were greater, but so were the rewards,” Zachary says. “I really wanted to feel normal again. This surgery seemed to offer me the best opportunity for that to happen.”

After discussing the options with his family, Zachary decided he wanted Dr. Sankar to perform the more complex surgery with the hope of better long-term results. His family agreed.

“We were apprehensive, but we really wanted Zachary to be able to make this important decision about his future,” his mom says.

Two operations instead of just one

On Nov. 3, Zachary and his family arrived at The Children’s Hospital of Philadelphia for pre-admission testing, blood work and more X-rays. Surgery was scheduled for the next day.

The X-rays revealed a new problem: Zachary now had SCFE in his right hip, too.

Bi-lateral SCFE is not uncommon — it affects up to 40 percent of children with SCFE and is more likely to affect boys than girls – but it did add a layer of complexity to the upcoming surgery. Zachary would need to be positioned on his right hip for surgery on his left hip, and on his left hip for surgery on his right hip. Putting pressure on a severe wound immediately after surgery is not ideal and can cause complications in healing.

Fortunately, the SCFE in Zachary’s right hip was milder and could be treated effectively with the standard 1-pin treatment, a minimally invasive procedure. Dr. Sankar decided to do this surgery first, so Zachary could be safely positioned on his right side for the longer, more complex and detailed surgery on his left hip.

“Before surgery, Dr. Sankar came and reviewed everything with us,” Zachary says. “He told us the best case and worst case scenario and made sure we were comfortable with everything.”

Zachary and his family were apprehensive — as any family would be before surgery — but they were reassured by Dr. Sankar’s expertise and confidence.

Both surgeries went as planned. Zachary’s right hip was surgically corrected in less than an hour. The modified Dunn procedure on his left hip took about four hours. During surgery, Dr. Sankar or a nurse regularly updated Zachary’s family in the waiting room.

“The communication at Children’s Hospital was wonderful,” Valerie says. “We always knew what was happening and if we had any concerns, we knew who to talk to.”

Zachary’s surgery was on a Friday. By Sunday, his rehabilitation team had him on his feet. He only walked a few feet to the door of his hospital room that first day, but each day he was able to walk farther and stand for longer periods of time.

“The nurses on 4 south [an inpatient surgical unit] — especially Alicia [Williams] and Quanda [Grant-Cook] — were wonderful,” Valerie says. “They got him up and moving when he didn’t want to. They were able to gently encourage him in different ways than my husband and I could.”

By Wednesday — just five days after surgery — Zachary could walk the longest hallway at Children’s Hospital, go up a flight of stairs and walk to the bathroom by himself with crutches. With those tasks accomplished and his pain under control, he was able to be discharged from the Hospital.

Today, Zachary is an active 15-year-old who enjoys spending time with his family and friends. He walks and runs with ease. A sophomore at Dover High School, he loves learning about American history and tinkering with his computer. He hopes to pursue a career in computer programming and coding.

“I’ve been given an incredible gift: my life back the way I want it,” Zachary says.