One day in early August 2017, 10-year-old Sebastian awoke writhing in pain, unable to use his legs. Just six months before, he had been an active little boy who walked a mile to school, loved playing during recess, and was on the fencing team. Now, bound to a wheelchair, dependent on others for nearly every aspect of his life, and on opioids for pain, he was on the verge of becoming clinically depressed. 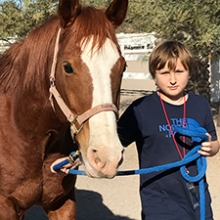 The decline in Sebastian’s health was slow and easy to miss at first. In February 2016, he began complaining about feeling tired on the walk to school and of backaches after long drives, but he would be jumping around and playing not long after.

A full year later, in late February 2017, Sebastian was sent home from fencing practice with pain in his back and left leg. His coach chalked it up to muscle cramps, but when Sebastian awoke the next day unable to put any weight on his leg without extreme pain, it was clear something bigger was going on.

His pediatrician, a physical therapist, a rheumatologist and an orthopaedist near his home in Tucson, Arizona, suggested a wide range of possible diagnoses — a torn IT band, fragmentation of the upper femur, juvenile idiopathic arthritis, spondyloarthropathy and Lyme disease — but no one could diagnose his condition conclusively.

“All of his doctors were scratching their heads,” says Gina.

In the meantime, Sebastian hobbled around on crutches, struggled through physical therapy (PT), and was put on medication for the pain — which, at times, reached a 12 on a 10-point scale.

Despite numerous absences, Sebastian managed to finish the school year. He was started on Humira® injections, which reduced the pain to a five, the lowest it had been in months. But then in August, the pain increased again and he was suddenly unable to use his right leg, either.

At what Gina calls “the 10th second opinion,” a specialist in Phoenix suggested Sebastian might have amplified musculoskeletal pain syndrome (AMPS). In this condition, the body amplifies a mild pain signal similar to the way a sound amplifier takes a soft sound and makes it loud. This abnormal response to pain usually occurs as a result of injury, illness or psychological stress. Most blood and imaging tests come back normal, making it difficult to diagnose unless a physician has seen a variety of children with the condition.

This new information prompted the family to research their options for treatment.

“We realized we needed someone who was an expert in AMPS; someone who would look at all of Seb’s symptoms and put the pieces of the puzzle together in a way that made sense,” says Gina. “We also recognized we needed to look outside the state to obtain the best possible care for our son.” 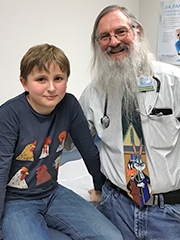 Sebastian and Dr. Sherry Fortunately a colleague of Gina’s connected the family to the Center for Amplified Musculoskeletal Pain Syndrome at Children’s Hospital of Philadelphia (CHOP). After reviewing Sebastian’s medical records with his team, Center Director David D. Sherry, MD, had the family fly out to Philadelphia for an evaluation. In just four hours at CHOP, the family’s six-month struggle to find help finally ended: Dr. Sherry dismissed the other diagnoses and confirmed Sebastian’s diagnosis as AMPS.

“CHOP is an extremely well-oiled machine,” says Gina. “The whole team had obviously read every single page of Seb’s medical records. We had never experienced that kind of care before. They put all the clues together.”

Sebastian was taken off all pain medication and started an intense outpatient treatment program lasting eight hours a day, five days a week. The program had three goals:

His days consisted of physical therapy, occupational therapy, psychological counseling, creative arts therapy and social work to retrain his nerves, re-strengthen his body — especially his legs — and teach him skills to cope with the pain.

Sebastian arrived to his first day of treatment in a wheelchair. By lunch, he was using a walker, and by day’s end, he was on crutches. His progress continued at a breakneck pace. By the end of day two, he was standing and walking on his own. His function came back fast, but it took longer for the pain to go away.

“So much of AMPS treatment is about distraction,” says Gina. On Sebastian’s days off from treatment, the family did a lot of sightseeing in Philadelphia to keep his mind off the pain. Gina recalls a visit to the Franklin Institute science museum just a few days into treatment in which it took almost an hour for Sebastian to climb the stairs to the main entrance.

After five weeks in the program, Sebastian was discharged from CHOP completely physically functional. Three days later, he walked to school. He’s now caught up on his classes, volunteers at a horse ranch, walks to school every day, and walks the dog.

Stress can trigger a recurrence, so he has regular psychological follow-up appointments to make sure his stress levels are in check. But if AMPS does recur, Gina is confident that the team at CHOP gave her son the skills and strategies to cope with the pain so it doesn’t get so bad.

“They care very much about the whole child, their mental, physical, and emotional health and well-being,” she says.

Gina is happy the ordeal is behind them and is committed to getting the word out so other families don’t have to go through the same experience.

“Awareness is huge,” she says. “It can take such a long time to get a diagnosis, and the pain that it causes the child and the family is massive. I know these stories make a huge difference, so I’m really grateful to share ours.”

Gina and her family have also committed to financially supporting the mission of Dr. Sherry and his AMPS Program. Understanding that breakthroughs in research and patient care are made possible with the assistance of philanthropy, Gina says, “When I reflect on the journey our family and our son have had to endure, I realize how fortunate we were to have found CHOP and Dr. Sherry. Philanthropic giving can help other families and children find their way to an accurate diagnosis faster, and then to treatment and recovery, so the child and the entire family can begin to heal.”