Zach, 11, was born with spina bifida, but he’s never let it hold him back. He wants to make the world a better place and is raising money and awareness for the condition. 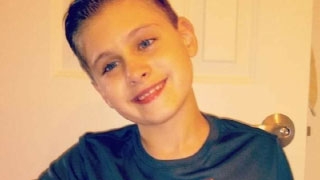 Zach, 11, was born with spina bifida and receives ongoing care at CHOP When Zach’s mom, Jessie, was 18 weeks pregnant, she was excited for her ultrasound so she could learn the gender of her child. The imaging revealed she was having a baby boy, but there was unexpected news: The baby had spina bifida.

“When they first said what it was, I had no idea. I had never heard of it. It was devastating,” says Jessie.

Jessie was referred to Children’s Hospital of Philadelphia’s Center for Fetal Diagnosis and Treatment, where she was evaluated and then closely monitored for the rest of the pregnancy. In the third trimester, her appointments included meetings with the team that would care for Zach after birth, including neonatologists and members of CHOP’s Spina Bifida Program. When Zach was born at the Hospital of the University of Philadelphia, he was immediately transferred through an underground tunnel to CHOP. He spent the first 10 days of his life in CHOP’s Newborn/Infant Intensive Care Unit (N/IICU).

A defect of the central nervous system

Spina bifida is a birth defect that can occur anywhere along the spine. It is a condition in which an area of the spinal column has failed to fully develop, leaving it open and exposed at birth. This can damage nerves leading to weakness and loss of sensation in the legs and bowel and bladder problems. Zach was diagnosed with the most common and serious form of the condition, known as myelomeningocele (MMC). His defect is located in his lower spine. At 2 days old, Zach had surgery to close the opening.

Initially, Zach showed signs of hydrocephalus, or fluid on the brain, but the swelling wasn’t severe. His doctors hoped it would resolve on its own. Spina bifida interrupts the flow of cerebrospinal fluid, which is produced in the brain and circulates along the spinal column, acting as a cushion. As a result, patients with spina bifida experience hydrocephalus.

At home, when he was 1 month old, a visiting nurse raised concerns over Zach’s enlarging head circumference. Zach was taken back to CHOP and a ventriculoperitoneal shunt was surgically placed to relieve the pressure on his brain. A shunt is a tube placed in the cavity of the brain where fluid is located. The tube is then directed into the abdomen, where the fluid can be absorbed.

The first three years of Zach’s life were spent in and out of CHOP.

“We were at the doctor’s all the time. I was constantly worried about his health,” says Jessie.

As an infant, Zach experienced failure to thrive — a condition in which a child falls behind growth and developmental milestones. His care team quickly found that fluid was placing pressure on his brain due to a shunt malfunction. After his shunt replacement, Zach slowly began to improve, gain strength and grow.

When he was 1 year old, Zach was diagnosed with reflux in his left kidney, which left him susceptible to urinary tract infections (UTIs). He depended on a urinary catheter since birth to help drain his bladder, but infections were still a risk.

By age 3, Zach had his ureter repaired and a new channel placed through his belly button for his catheter. He also had a new shunt placed and surgery to correct a lazy eye. Fortunately, his health began to stabilize and he hasn’t needed surgery since. 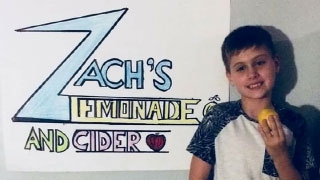 Zach raising awareness and funds for CHOP's Spina Bifida Program Zach is almost 12 years old. He’s a caring, affectionate and extroverted kid with a lot of friends. He’ll talk to just about anyone, says his mom, Jessie.

“He has a little bit of an attitude to him, too,” she says. “If someone is going to try to pick on him, he’ll stand up for himself. He won’t be bullied.”

Spina bifida can cause paralysis in the body. Because of the location of Zach’s defect, he experiences loss of feeling below his knees. He wears braces on his legs and uses crutches to get around. He attends the Spina Bifida Program Clinic every six months, where he sees a team that has known him since he was born. He and his mom look forward to visiting nurse Jeanne Melchionni, RN, and Administrator Beverly Santiago. At the clinic, Zach also sees attending physician Mark Magnusson, MD, PhD, as well as a physical therapist, an orthopaedic surgeon, and a urologist.

Zach recently became interested in helping others. He talked to his family and decided he wanted to raise money and awareness for spina bifida. He wants to visit other kids with spina bifida in the hospital, bring them gifts and “make their day,” says Jessie.

In October 2018, during Spina Bifida Awareness Month, Zach organized a hot apple cider stand outside his favorite pizza place near his family’s home. The pizza place helped him advertise the event. Zach worked the stand for nearly three hours and raised $400 for the Spina Bifida Program Clinic.

“He has a big heart and likes to help people,” says Jessie.

Zach plans to make the fundraiser a yearly event and continue to raise money and awareness of spina bifida.