When Zaki was diagnosed with polydactyly, his mother, Nadia, was in despair. She worried her son wouldn’t be able to hold a pencil or do normal childhood activities. But thanks to surgical reconstruction at CHOP, he has full function and even better flexibility than his doctors expected.

Zaki was born with polydactyly, a condition in which there are more than five fingers or toes on one or both hands or feet. In his case, he had Flatt-Wassel type II thumb duplication (pre-axial polydactyly), in which only the top part of the thumb is duplicated. In Zaki’s case, the extra right thumb had a single extra bone contained inside. It’s a less common form of polydactyly and was easy to miss on the little baby’s tiny thumb, which was tucked into his fist the whole time he was in the NICU. It wasn’t until Zaki’s mother, Nadia, brought him home that she noticed it.

She took him to the pediatrician who diagnosed the condition and recommended they see a hand surgeon that specializes in the condition. Nadia researched online and found only a handful of specialists across the country. One was as far away as Los Angeles. She would have traveled there — and to the end of the earth — for Zaki to get the best care. Fortunately, she didn’t have to. Children’s Hospital of Philadelphia (CHOP), which is just a few hours’ drive away from the family’s home in northern New Jersey, has a team of hand specialists who have experience treating the full range of pediatric hand and upper extremity conditions.

Nadia and Zaki drove to Philadelphia and met with Apurva Shah, MD, an orthopaedic surgeon with the Hand and Arm Disorders Program at CHOP. X-rays confirmed Zaki’s diagnosis. Dr. Shah recommended surgery to remove the extra digit, but suggested waiting until Zaki was a little bit older, at which time the operation and anesthesia would be safer. 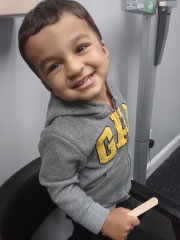 Zaki underwent surgical reconstruction at CHOP when he was 18 months old. It was an outpatient procedure, so the family was able to return home the same day. After surgery, he had to wear a long arm cast that went from his fingers to his armpit for six weeks. That part was a bit of a struggle, recalls Nadia.

“Try having a 2-year-old not get his arm wet,” laughs Nadia. After cast removal, Zaki underwent six weeks of occupational therapy near his home to get his muscles back to full function. He has a single, well-functioning thumb with great stability and strength. Dr. Shah is thrilled with the alignment and function of the thumb, and the minimal scarring from the operation.

“You can’t even tell he had an extra thumb,” says Nadia. “He’s just a normal child. There is no physical issue with him at all. He actually has far better flexibility than Dr. Shah thought he would have.”

Zaki recently turned 3. He will return to CHOP for follow-up at age 5 and then again at age 15 to ensure he is developing appropriate thumb and hand function as he grows and learns new skills such as writing. But his outcome has been excellent. Looking back now on how dismayed she was when Zaki was first diagnosed, Nadia urges other parents not to lose hope.

“You just have to do your research and try to be proactive,” she says. In addition to the excellent care Dr. Shah and his team provided, Nadia was struck by the family-focused aspect of the care they received. “They understand that kids might be traumatized by going through surgery and give them a Teddy bear to hug after surgery. I still have that Teddy bear. We had a really good experience at CHOP. He is able to use both hands perfectly fine thanks to Dr. Shah and all the help from CHOP.”