With nurses and doctors surrounding them, assessing little Teagan, Jason and Shannon soaked in the irreplaceable moments of holding their little girl, as if they were the only ones in the room.

They talked to her, gazed at her deep blue eyes as she cooed, and dressed her in a little robe her aunt had sewn for her. After spending this precious time with her, extended family members were invited in and took turns holding her. They handed Teagan back to Shannon, and Teagan closed her eyes and passed away peacefully. She lived for five hours.

Shannon and Jason struggled with infertility for four years, so they were thrilled when they found out they were pregnant. Then, at their 20-week ultrasound, they learned something was wrong with the baby girl they had yearned for and been expecting. A maternal-fetal medicine (MFM) specialist evaluated the fetus and said it appeared that their daughter had skeletal dysplasia, also known as dwarfism. It is a severe disorder of bone growth that can restrict the growth and expansion of the lungs. In some cases, it can be lethal.

“He told us to be prepared not to make it to term let alone for her to survive,” recalls Shannon.

The physician advised the couple to go to Children’s Hospital of Philadelphia’s Center for Fetal Diagnosis and Treatment (CFDT) for a more comprehensive prognosis. After an evaluation at the CFDT, which included expert imaging and a genetic workup to confirm the exact diagnosis, Julie Moldenhauer, MD, Medical Director of the Garbose Family Special Delivery Unit (SDU) and Director of Obstetrical Services at the CFDT, met with the couple and confirmed that their daughter had a lethal form of skeletal dysplasia. The baby wouldn’t survive after birth.

“We were shocked, shattered and angry,” recalls Shannon. “We had waited years to have this baby and now we had just 16 weeks before we would meet her and have to say goodbye.”

In the weeks to follow, Joanna Cole, PhD, clinical psychologist and Manager of psychosocial services in the CFDT, and other members of the CFDT’s Perinatal Palliative Care and Bereavement team helped the family prepare mentally and emotionally for the pending loss of their child. They helped Shannon and Jason create a perinatal palliative care birth plan. This step-by-step treatment planning helped the couple cope with the remainder of their pregnancy, and also prepared them for their delivery day by discussing their wishes for memory making upon meeting their daughter.

“When you receive the news that you are going to lose your little one, you’re in a fog. You don’t know where to turn or where to start,” says Jason. “Having the Perinatal Palliative Care Program there to walk alongside you from an emotional standpoint and then offer practical support about our options and develop a plan was extremely impactful and important. They helped us process our emotions, and make decisions that would be overwhelming to make all at once at the right pace and the right time.”

Birth in the Special Delivery Unit and final moments with family

Teagan Joy was born at full term in the SDU after Shannon spent 40-plus hours in labor. Teagan is an Irish name that means “beautiful.” “Beautiful joy” is what her parents will always think of her despite the pain her loss brought them.

After birth, as Shannon and Teagan were doing skin-to-skin care, Dr. Moldenhauer paid them a visit.

“She just looked at me and smiled and said, ‘Congratulations. You’re a mom today. I am so happy for you. She is so beautiful,’” recalls Shannon through tears. “That meant so much to me. She didn’t focus on the fact that Teagan was going to die. I got two to three minutes of joy about my baby. I won’t ever forget that. She set aside all of her knowledge and expertise and was just a friend and a fellow mom.”

While Shannon and Jason made the most of every minute with Teagan, the clinical team in the SDU tended to the couple’s needs.

“Everyone was incredibly nurturing, kind and loving,” says Jason. “You felt like they felt the pain of what you had just lost as well.”

The couple had a desire to have more children, but after the experience with Teagan, they were understandably apprehensive. How could they love anything more than they loved her? They found out through genetic testing that Teagan’s condition was random, like lightning striking. But could lightning strike twice?

Two weeks before what would have been Teagan’s first birthday, the couple found out they were expecting. It was a little bittersweet, says Shannon, to still be grieving but preparing for a new baby. There were a lot of emotional triggers and a lot of self-doubt.

“It’s about finding that balance between keeping her legacy alive but also not wanting our boys to feel like they are loved less than her,” says Shannon, who now has a 2½-year-old son named Seth and a 9-month-old son named Matteo. As Shannon described, grief is like a dance; sometimes you stumble across the floor as waves of grief overwhelm you. However, there are times when you dance gracefully in joy as you remember those special times. It is a balance, full of joy, tears and grief.

The couple remains forever grateful for the support they received from the CFDT and SDU teams during such a difficult time in their lives.

“They gave us the gift of time,” says Jason. “She wasn’t just this problem to be solved; she wasn’t a burden. They approached it like, ‘She is your daughter. She’s Teagan Joy, and we are going to walk alongside with you and go through this journey with you.’ Creating that culture and environment of compassion is critical. Even in the darkest of situations, we were still able to laugh and smile and find joy in a situation that appeared hopeless.”

It was important to Jason and Shannon to find a way to give back to CHOP and support other families going through similar circumstances. They decided to make baby robes like the one Teagan’s aunt had sewn for her, which the family treasures to this day.

“It’s a little thing parents can put their babies in and then keep as a memento,” says Jason. They have made more than 50 robes which Dr. Cole has given to other families anticipating the loss of their child.

The Wood Center for Fetal Diagnosis and Treatment cares for women carrying babies with known birth defects, from diagnosis to fetal surgery to care after birth. 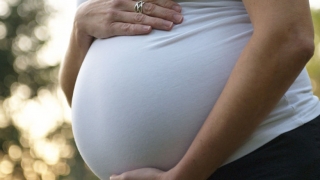