It was an exciting time for Michaela. Just a few days after her 16th birthday, she left for summer camp in Israel. Ahead of her lay weeks of new experiences and sights to see. 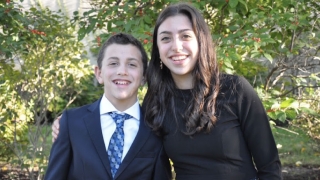 But just a few days after arriving in Israel, she started to have vision issues. It began with mild drooping of her left eye. Over the course of the next few days, the drooping got progressively worse until Michaela could no longer open her left eye.

A doctor in Israel diagnosed her with a scratched cornea, but even after the cornea healed, Michaela’s eye wouldn’t open. She spent the remainder of the trip only able to see out of one eye.

After the trip, Michaela saw an eye doctor near her home. The doctor suspected Michaela had myasthenia gravis, a rare autoimmune neuromuscular disease in which the nerves and muscles are unable to communicate properly. In myasthenia gravis, the immune system is overactive and creates abnormal antibodies that disrupt the connection between muscles and nerves, leading to muscular weakness.

In researching the condition online, Michaela’s mother, Alyssa, came across a video by Children’s Hospital of Philadelphia (CHOP) featuring the interdisciplinary team of pediatric neurologist John Brandsema, MD, pediatric surgeon, Thane Blinman, MD, and pediatric neuro-ophthalmologist, Grant Liu, MD, all of whom have vast experience working together to diagnose and manage myasthenia gravis. Alyssa made an appointment for Michaela to be evaluated by the team. 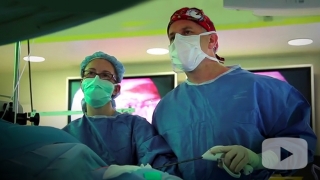 Meet families who've faced juvenile myasthenia gravis, and learn how the condition is treated by an experienced, multidisciplinary team at CHOP.

Myasthenia gravis can present in two forms: an ocular form, characterized by eyelid drooping and double vision, and a generalized form where a child may have difficulty swallowing and breathing, as well as arm or leg weakness. The evaluation confirmed Michaela had ocular myasthenia gravis.

Michaela was prescribed medication to control her symptoms, but soon after her diagnosis, her right eye began to droop and eventually wouldn’t open. A hard-working student, Michaela was prepared for her junior year of high school to be rigorous. Now, she could barely open her eyes enough to take tests and notes. She struggled with attendance and keeping up with her studies.

Drs. Brandsema, Blinman and Liu met with Michaela and her mother to discuss other possible treatment options. A thoracoscopic thymectomy is a minimally invasive surgery to remove the thymus — an organ in the chest that controls the immune system. For patients with ocular myasthenia gravis, the procedure can help manage symptoms.

Results from the procedure can be immediate or take weeks, months or even years to take effect. In some cases, patients may see no improvement at all. Still, it offered the best hope of managing the condition. Together, Michaela and her family and doctors at CHOP decided to move forward with surgery. 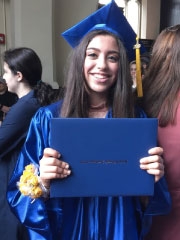 A month after Michaela’s diagnosis, Dr. Blinman performed the thymectomy. The surgery combined with medication has kept the condition well controlled. Her eyelids still droop sometimes and she often sees double in the mornings. But her symptoms have improved significantly. The hope is that she can eventually come off medication once her symptoms go away completely.

“I completed my senior year of high school with a strong attendance record and minimal issues with my eyes, thanks to the excellent care I received from Dr. Brandsema and his team,” says Michaela, who recently graduated as salutatorian of her class.

Michaela, now 18, plans to attend Stern College for Women in New York City, but not before taking a gap year in Israel. She’s excited that this time she’ll be able to take in the sights with both eyes wide open.