In a season of sorrow, Cameron was — and is — a joyful presence. 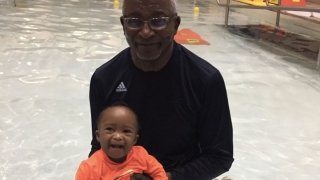 Roxanne and Cameron Sr. learned their baby had trisomy 21 in the 13th week of her pregnancy. While some doctors pushed for termination, they were preparing themselves for raising a child with special needs. They were both social workers and had a better understanding of what that meant than other families might.

“Of course, the diagnosis was a huge surprise,” Roxanne says. “You need to grieve the loss of the child you thought you were going to have to be able to embrace the child you will have, in spite of the scary statistics of this diagnosis. But we were ready to do this together, and we were very excited about our baby.”

A different level of grief

But she wasn’t alone. Help arrived in the form of Pop-Pop, Cameron Sr.’s father, James. Even before the heart attack, James had been grieving. His mother, for whom he was the caregiver, died at 94 a couple of months before Cameron Sr. did. Despite being heartbroken, James felt he could play a significant role. He was retired. He had time. He had abundant love and tenderness to bestow on his grandson and support to give Roxanne.

“I love my little grandson,” James says. “I never thought I’d be in this position, but it’s all good.”

James comes with Roxanne to all of Cameron’s doctor and therapy appointments to help entertain Cameron and listen to the treatment plans. Cameron sees Children's Hospital of Philadelphia (CHOP) specialists in Endocrinology, Audiology, Ophthalmology and Cardiology, plus he has his annual appointment at the Trisomy 21 clinic.

James is Cameron’s babysitter while Roxanne is at work as an attorney and a licensed social worker psychotherapist, and the grandfather-grandson duo go to the playground, take care of shopping, run errands and just hang out together.

“When we’re out at the store or post office, everybody loves him,” James says. “They tell me, ‘What a beautiful baby.’”

Roxanne had been through the single parent thing before; she has a 16-year-old son from a previous relationship. But she’s grateful for how James has stepped in and stepped up.

“At first, we were all in shock,” Roxanne says. “Pop-Pop James has been such an unexpected help. I could do it all as a single parent, but I’m glad I don’t have to go it alone.”

Therapies at home and in the pool

The in-home special instruction, occupational, physical and speech therapies Cameron receives weekly take place at what had been James’ mother’s home, which is near Roxanne’s.

“The therapists are great,” James says. “They teach me what I need to do to keep the therapy up between their visits.”

James is also the one in the pool during the special Trisomy 21 Aquatic Therapy sessions. The Trisomy 21 Program started aquatic therapy in 2011, and the classes are popular with families.

He splashes, kicks, blows bubbles and grabs the beach ball. He doesn’t realize he’s getting a work out while he’s playing. James is there at every turn, guiding and helping.

“Last summer when we were at the beach, I could tell Cameron loved the water,” Roxanne says. “When I saw information about pool therapy, I signed him up right away. I’m not much of a swimmer, but luckily Pop-Pop is.”

The bond between Cameron and James is clear. After Milligan was finished with one exercise, Cameron reached for his Pop-Pop and snuggled in his arms.

“I'm so proud of him," James says. "He's really progressing.”

All that Roxanne has experienced in the last two years — a prenatal diagnosis of Down syndrome, her husband’s death, her son’s birth, raising her scholarly teen, coping with it all — has her considering shifting her social work therapy focus to include working with families who recently found out their child has or will have trisomy 21.

“Some families may want counseling when they get the diagnosis to help them work through the wide array of emotions,” she says. “I’m still very close to what that feels like — grieving and anticipating your baby at the same time. I think I could help people through that with counseling and ongoing support.”