There are plenty of chairs at VMS Movement Specialists, a gym in Newtown, PA, that their parents own, but identical twins Savion and Savaughn, 11, would rather squeeze side-by-side in the same chair than sit separately. 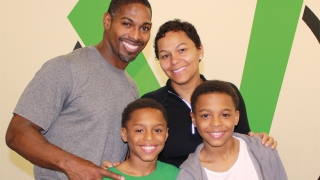 As they sit and read, you can only tell them apart because Savaughn is about three inches shorter and has a four-inch scar across his stomach — a reminder of the miracle that they are both here, together, and healthy today.

In 2000, their father, Vaughn Hebron, retired from the NFL. He’d been a fan favorite on the Philadelphia Eagles and earned two Super Bowl rings in Denver, where he was the Broncos’ all-time leading kick returner.

He was about to start work as an analyst on Comcast’s “Postgame Live” show when he and his wife, Kim, learned they would be having twins.

At five months, when most parents discover their baby’s sex, the Hebrons were instead dealt a blow. Tests revealed the babies had a life-threatening condition called twin-twin transfusion syndrome (TTTS), in which one twin gets too much blood, oxygen and nutrients, while the other twin doesn’t get enough.

“They told us there was a 70 percent chance one or both wouldn’t make it,” says Vaughn.

By evening, Savaughn’s skin had turned ashen and his stomach was distended. Unsure of the problem, doctors advised the couple to send him to The Children's Hospital of Philadelphia (CHOP).

“They gave me a Polaroid of Savaughn and said I should say goodbye,” remembers Kim with tears in her eyes.

Finding hope and treatment at CHOP

At CHOP, Savaughn was diagnosed with necrotizing enterocolitis, a condition not uncommon in premature infants where portions of bowel tissue decay. CHOP surgeons immediately removed three inches of his intestine. The procedure was a success.

Vaughn was at Savaughn’s side in CHOP's Newborn/Infant Intensive Care Unit (N/IICU) every day for the next three months of recovery. “I’d go from CHOP to the studio, tape ‘Postgame Live,’ then go back to CHOP,” he says.

“You’re going through this time of trauma, and they made it so comfortable, so easy," Vaughn added. "I’d come in, and it felt like I was coming into the locker room. It was like a second home.”

“The nurses in the N/IICU were amazing,” says Kim. “They dotted every i and crossed every t, leaving nothing to question. They were so good to us, and for Savaughn to come home healthy, all I can feel is blessed.”

Finished reading now, the boys run around the gym. Savion pretends to box; Savaughn does a pullup. They breakdance to a song only they seem to hear.

“They’re quite the characters,” says Kim, “but they love to be together. It’s amazing to watch.”