The Distinguished Alumni Award at Children’s Hospital of Philadelphia is named for Richard D. Wood, Sr., who served as a member of CHOP’s Board of Trustees for 45 years.

When Children’s Hospital was incorporated in 1858 — three years after its founding — the name G.A. Wood was among the signers. Thus began a family tradition of service to the nation’s first children’s hospital.

Richard D. Wood, Sr., a descendant of G.A. Wood, became the first president of Children’s Hospital. He joined the board in 1950 and played a key role in the Hospital’s development into one of the finest pediatric medical centers in the nation and the world.

In June 1989, Children’s Hospital’s new pediatric ambulatory care center was dedicated in honor of Richard D. Wood, Sr., and the facility has become known as the Wood Center.

Today, Richard D. Wood, Jr. is an Emeritus Trustee and carries forth the Wood family’s commitment to the health and well-being of children.

Each year, the Distinguished Alumni Award is presented to an alumnus with significant medical and scientific achievements that distinguish the alumnus from his or her peers. 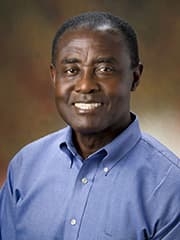 Dr. Ohene-Frempong was a full-time member of the faculty of the University of Pennsylvania School of Medicine, where he was professor of Pediatrics. He was board-certified in Pediatrics and Pediatric Hematology-Oncology and was an attending Hematologist at CHOP.

Born in Kukurantumi, Ghana, Kwaku Ohene-Frempong, M.D., arrived in the United States in 1996 to attend Yale University. Prior to attending Yale, Dr. Ohene-Frempong, who is an International Scholar Athlete Hall of Famer, served as the Senior Perfect of the Prempeh College, where he completed both his Ordinary and Advanced-level secondary school studies. At Prempeh, he won three national Track championships and became a Ghana national high school champion in long jump, triple jump and high hurdles. At Yale, he captained the Track and Field team and set both indoor and outdoor records for high hurdles. He continued to compete for Ghana and set a record that stood for 26 years.

Dr. Ohene-Frempong received his Bachelor of Science degree in biology in 1970. He graduated from Yale School of Medicine in 1975 and completed his residency in pediatrics at the Cornell Medical Center. Dr. Ohene-Frempong completed a three-year fellowship in Pediatric Hematology-Oncology at CHOP in 1977. Upon completion of his subspecialty training, he established the Sickle Cell Center of Southern Louisiana at Tulane University and served as its first Medical Director. He also served as the Director of Pediatric Hematology-Oncology and Associate Professor of Pediatrics at Tulane.

In 1986, Dr. Ohene-Frempong returned to CHOP, becoming the Director of the Sickle Cell Program. He directed the Center’s pediatric hematologists, nurse specialists, social workers, child psychologists and counselors in the care of more than 600 children who had sickle cell disease. He also oversaw and conducted life-changing research programs. Under his leadership, the division won a grant from the National Institutes of Health to become one of the nation’s 10 Comprehensive Sickle Cell Centers. He was named the center’s director in 1990. During this time, he served as a member of the Sickle Cell Disease Advisory Committee of the National Institutes of Health and in 1991, he was elected President of the Sickle Cell Disease Association of America for a two-year term.

In 1993, the National Heart, Lung and Blood Institute of the National Institutes of Health funded a research grant to develop a pilot project for Newborn Screening for Sickle Cell Disease in Ghana. Prior to the initiation of the screening program, the first sickle cell clinic has 10 patients in 1992. In the next several years, the screening projected tested over 158,000 newborns in the Kumasi area and enrolled over 2,400 newborns with sickle cell disease in the clinic. The clinic had grown tremendously to more than 8,000 patients by 2003. 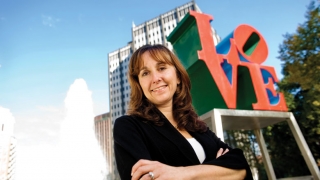 Your gift today will ensure that Children’s Hospital of Philadelphia has the resources to continue to provide hope to all patients and families who turn to us.